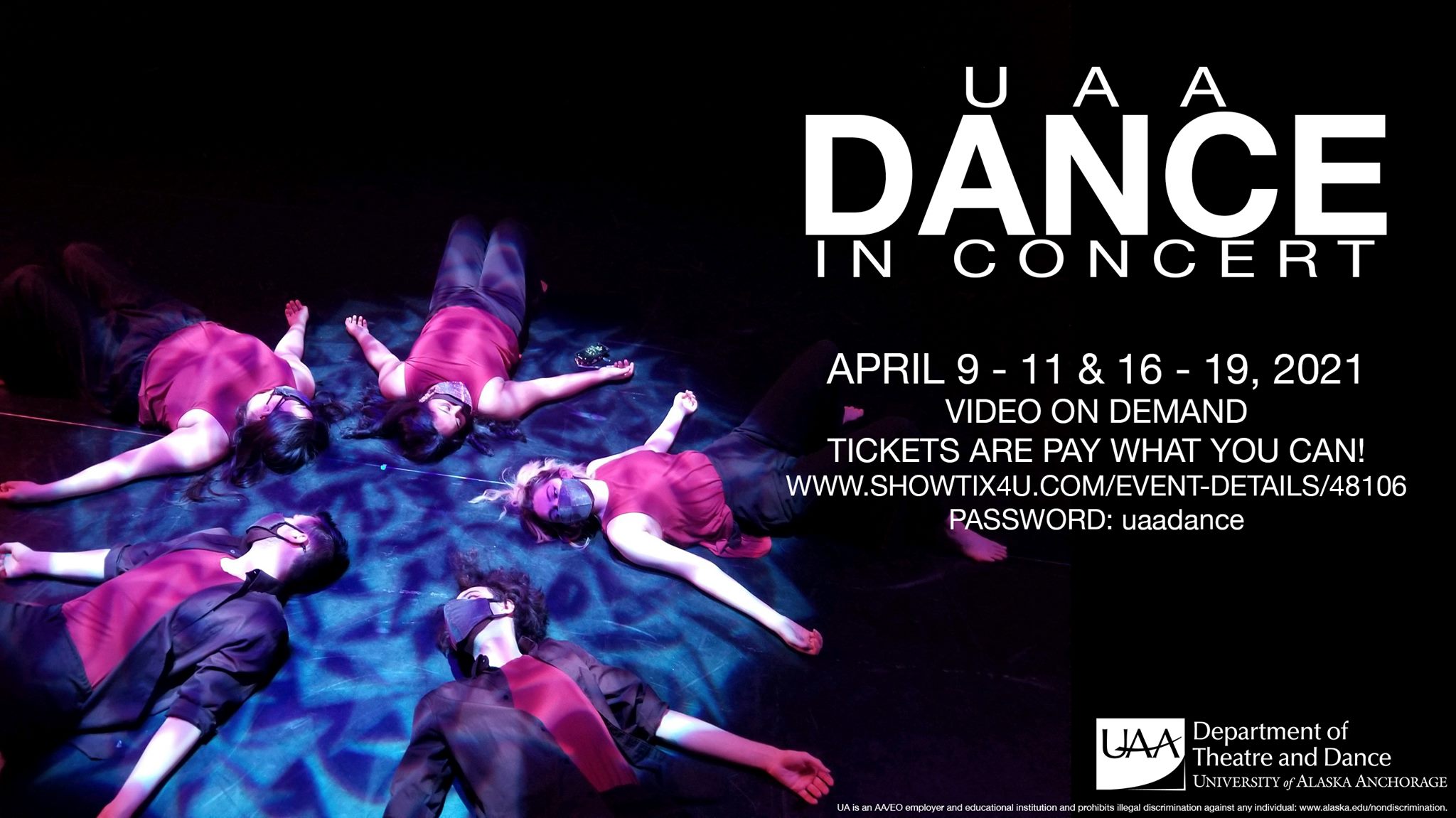 The theatre and dance productions are prerecorded and available through streaming, viewable at home. Photo Courtesy UAA Department of Theatre and Dance

April, like most months during the pandemic, is relatively light on noteworthy media releases. The film, television and video game industries are still slowly recovering and adapting to the ongoing pandemic, even over a year since it began. Picking up the slack this month is UAA’s own Department of Theatre & Dance, debuting two productions, viewable from the safety of home.

At or around UAA

The UAA Department of Theatre & Dance will be debuting both a dance and a theatre production this month. Both will be made available for a limited time to view as recorded and edited shows, via streaming. The theatre production will be Sophie Treadwell’s “Machinal,” which loosely adapts the story of Ruth Snyder, a woman executed for the murder of her husband. The dance production is set to premiere Apr. 9, while “Machinal” will premiere Apr. 16. Attending these shows is a great way to show support and demand for Theatre and Dance at UAA. Further information will be available on the UAA Department of Theatre and Dance Facebook page.

UAA at the Movies is being held by UAA Student Activities and Commuter Programs. UAA students can take advantage of discounted ticket fees to see films every Friday in April at Century 16. Featured films include “A Star is Born,” “Mortal Kombat,” “The Dark Knight Rises” and “Clueless.” More information can be found on the UAA Student Activities Facebook page.

A third-person loot-based shooter from developer People Can Fly, “Outriders” has earned considerable attention in the lead up to its Apr. 1 launch. A free open beta gave a taste of the game’s dynamic combat. Set in a dystopian sci-fi future, “Outriders” puts players into one of four classes, the time-warping Trickster, the destructive Pyromancer, the gravity-manipulating Devastator or turret building support class, the Technomancer. In a huge win for Xbox players, the game is free from launch to members of Xbox Game Pass.

The Mortal Kombat video game franchise is known for its brutal fighting, surprisingly complex lore and iconic characters. The new Mortal Kombat film, releasing Apr. 23 in theaters and on HBO Max, hopes to tap into the recent success of the games. The first red-band trailer for the film did a lot to instill confidence, promising over-the-top action and a much more serious tone compared to the previous 1995 film. Could Mortal Kombat be the first great video game movie?

The Mitchells vs. the Machines

“The Mitchells vs the Machines” at first glance looks like it could be a pretty basic, inoffensive children’s movie. The pedigree of the creative team behind the film suggests that it could be something truly special. Produced by Phil Lord and Christoper Miller, a filmmaking duo behind films like “The Lego Movie” and “Spider-Man: Into the Spider-Verse,” and written and directed by Mike Rianda and Jeff Rowe, both of whom made their names writing the excellent Disney series “Gravity Falls.” The film follows a family that finds themselves the last free humans on earth following an uprising of every computer on earth. Originally planned as a theatrical release, but delayed by the COVID pandemic, “The Mitchells vs. the Machines” was purchased by Netflix, and will release exclusively on the platform Apr. 30.

Netflix debuts the second season of its hit reality series, “The Circle” on Apr. 14. The streaming platform also brings popular genre films this month like “Insidious,” “Crimson Peak” and “The Time Traveller’s Wife.” As well as 2000’s era comedies like “Legally Blonde” and “Yes Man.”

Disney+ continues its weekly series “The Falcon and the Winter Soldier” and “The Mighty Ducks: Game Changers.” Legacy content coming to the platform this month includes Genndy Tartakovsky’s “Star Wars: Clone Wars,” a 2003 animated short series held in high regard by many Star Wars fans, as well as the first two “Night at the Museum” films.

Amazon Prime continues its weekly series “Invincible,” and brings “How to Train Your Dragon” and “Inception” this month.

Hulu continues to maintain its niche as a place to watch premiering network television, bringing each episode of the new “Law and Order: Organized Crime.” The fourth season of acclaimed “The Handmaid’s Tale” debuts Apr. 28, and Shrek 2 comes to the platform.

The game industry continues to struggle to make up for time lost during the shift to working from home during the pandemic. April is exceptionally quiet, though there are a few standout releases. “NieR Replicant ver. 1.22474487139...” releases Apr. 23, modernizing and localizing the formerly Japan-exclusive precursor to 2017’s incredible “NieR: Automata.” “Automata” represented some of the best and most innovative storytelling in video games, and I’ll jump at any reason to return to that world and combat. “New Pokémon Snap” comes to the Nintendo Switch Apr. 30, and promises to give players a glimpse into the natural habitat of the popular creatures, armed with a camera. Nature photography, but make it “Pokémon” is a very strong pitch.