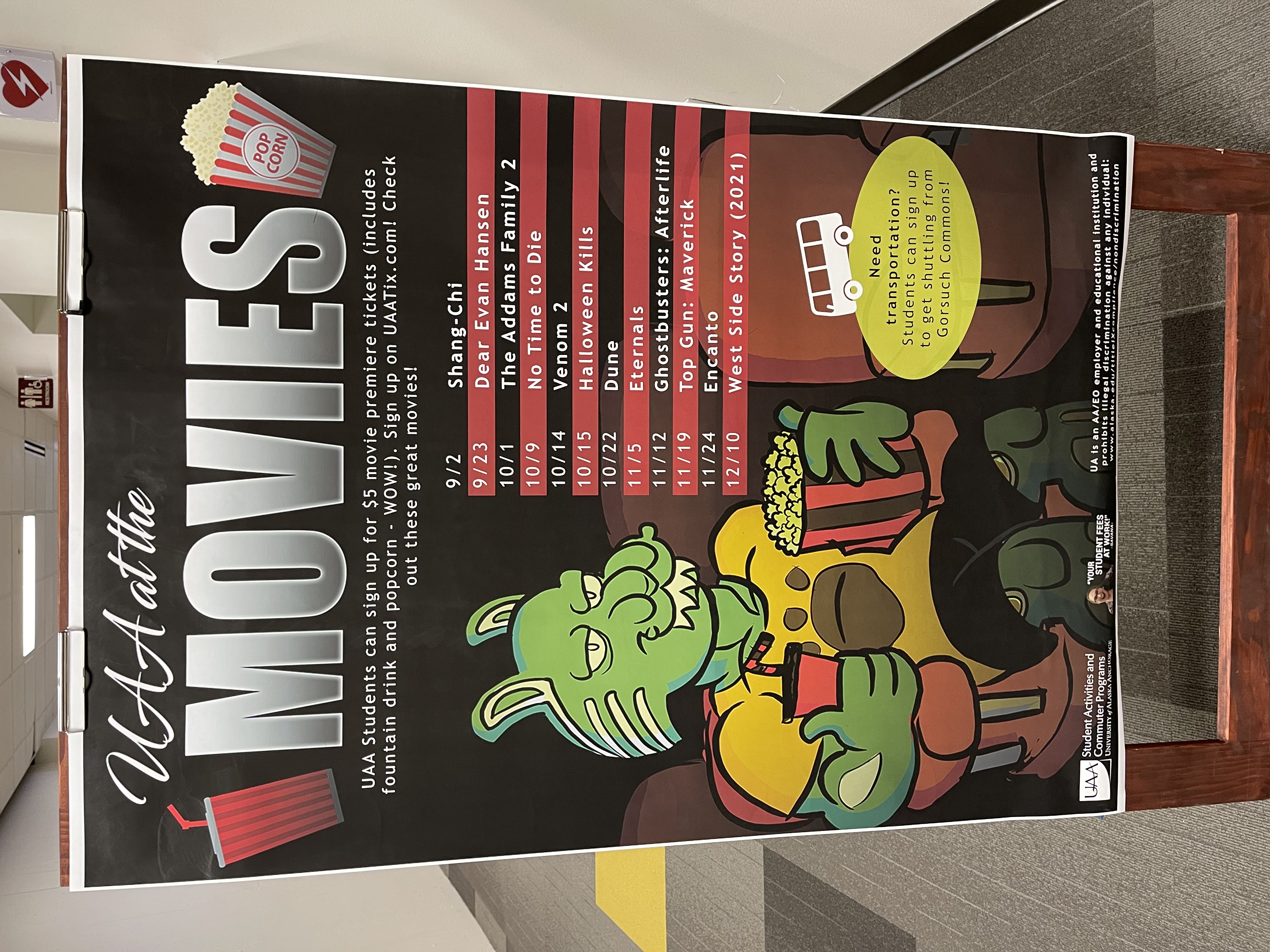 The UAA at the Movies schedule can be found on banners around campus. Photo taken by Jake Dye

UAA at the Movies is a program that offers discounted tickets to a private screening of new movies exclusively for UAA students, staff and alumni. The showings are held at Century 16 in midtown Anchorage.

Corey Miller, the Student Activities Coordinator at UAA spoke about efforts to include additional activities to the screenings, making them more than just a film screening.

“It’s really easy with some movies to collaborate with different departments… try to find some type of educational discussion to be had,” Miller said.

Of course, not every film will have special activities to go with them, but where it makes sense it will probably happen. Examples given were African drums played before the first-ever UAA at the Movies, a screening of “Black Panther” done for Black History Month 2018 in collaboration with the Black Student Union, or Disney trivia ahead of the premiere of “Frozen 2.”

Potential future opportunities include a conversation around suicide in partnership with the UAA Health and Counseling Center as part of “Dear Evan Hanson,” as well as a dance performance accompanying “West Side Story.”

UAA at the Movies became possible during the pandemic because of Cinemasafe, a set of cleaning and distancing standards adopted by most theaters on a nationwide scale. Century 16 is operated by Cinemark, one of the theaters participating in the initiative.

The Student Activities team has had to be a little flexible as COVID regulations and film release dates continue to shift. Miller described the tragic loss of a Christmas time showing of “Elf” to a new set of COVID-related restrictions. A showing of “Venom: Let There be Carnage” advertised on banners around campus is set for the film’s now outdated Sep. 24 release date. The “Venom” release date has since shifted to Oct. 14, then to Oct. 1.

Students interested in taking advantage of the discounted tickets and attending UAA at the Movies showings should act quickly to secure their spots. Tickets have to be purchased at UAATix.com, and cannot be obtained at the theater. The last several showings have sold out, including the first event of the fall semester: “Shang-Chi and the Legend of the Ten Rings.”

Showings currently scheduled for the remainder of the fall semester include “Dear Evan Hanson,” “The Addams Family 2,” “No Time to Die,” “Dune,” “Ghostbusters: Afterlife” and plenty more.