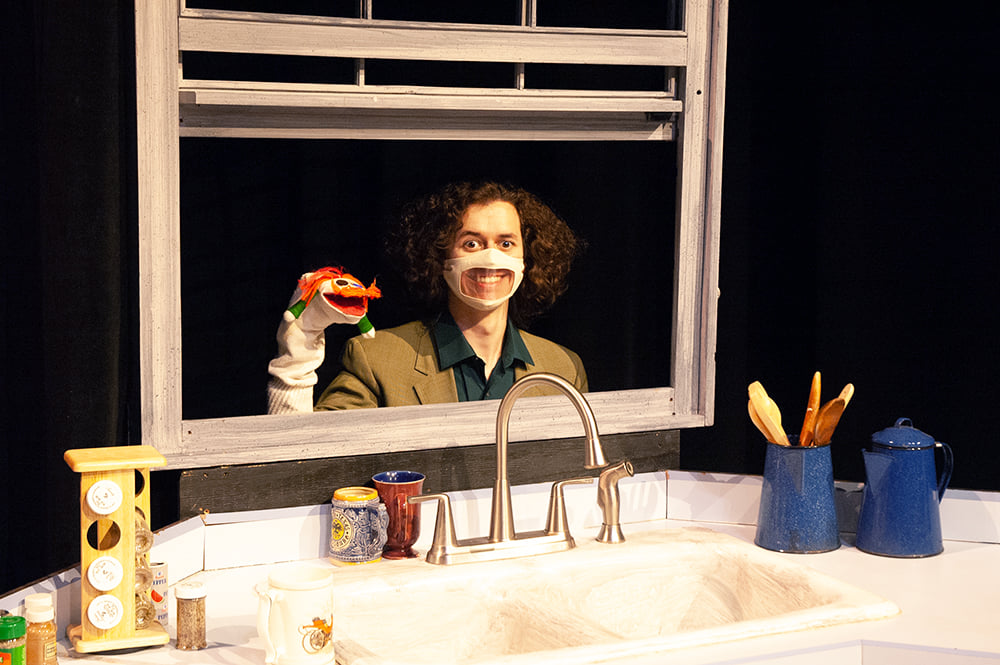 Student and actor James Peritz played both Millet and his sock puppet Hinky Binky. The sock puppet was not required to wear a mask. Photo courtesy of UAA Department of Theatre & Dance.

At the start of the COVID-19 pandemic, UAA cancelled all in-person and on-campus activities. One of the programs cancelled was the theatre department’s production of “Machinal”, only a month before opening night. Students wouldn’t be able to get back onto the stage until the start of fall semester. Instead of live performances, the productions for the 2020-2021 school year are entirely virtual, filmed and edited, viewed online.

“Fuddy Meers”, a comedy about a woman named Claire who wakes up each morning with no memory, was the first production to be released virtually. It was available to purchase and view from Oct. 30-31-Nov. 1, 2020. The shows can only be made available for a limited time due to licensing restrictions and royalty fees. Dr. Brian Cook, Chair of UAA’s Department of Theatre & Dance, said that publishing companies would likely never have allowed the release of filmed versions of their plays in a world without COVID.

Coming up later this semester is Sophie Treadwell’s “Machinal”. The play loosely tells the story of convicted murderer Ruth Snyder, who was executed for the murder of her husband. “Machinal” explores the inequality faced by women in the 1920s.

Dr. Cook explained that the play “provides context for why a woman might choose murder to escape her limited circumstances.”

“Machinal” is currently being filmed, and details about when it can be watched will be released on the UAA Department of Theatre & Dance Facebook page.

Many of the students in UAA’s theatre program had never acted for a camera before. Student actor James Peritz described the difference between acting for the camera as opposed to the live audience, saying “we had to be more aware of how we’re facing the camera, how we look and making sure the camera is getting our best angles.”

Students are handling the operation of the cameras as well as editing the films together. UAA graduating senior Brighton Coggins acted as both director of photography and editor on “Fuddy Meers”. Other production roles, like stage manager, sound designer and set designer were also filled by UAA students.

Tyson Hewitt, a professor at UAA during the production of “Fuddy Meers”, the first production released virtually, described other challenges that arose from translating the live performance into the recording.

Hewitt mentioned the fight choreography had to be reworked, initially designed to make use of the whole stage, he said that looking through the camera “the fights were playing slowly and jumbled, where it was difficult to focus on the necessary pieces of action as they were happening.”

Choreography was reworked to use “pockets” of the set, which the camera could move between, directing the viewer’s focus. Performing a comedy to an empty room was also a challenge for actors who suddenly weren’t getting the immediate feedback of a live audience. Those who were in the building had to actively try not to laugh, to avoid ruining a take. Hewitt admitted that he laughed more than once, though student actor Katia Holmes said Hewitt laughed around ten times.

An aspect of the experience for the actors that is completely different due to the virtual format is the opening night. Rather than all the actors putting on the show for the public for the first time, they joined their families at home as part of their own audience.

Holmes described the experience “Watching my work on display after the fact was a total trip, but also kind of a cool experience to be able to watch my family’s reactions as the show was happening and give them direct insight as to what was going on.”

An important part of translating the stage productions into the recorded shows was maintaining the identity of the stage.

Peritz said that with both of the shows, they made an effort to “treat them as much like plays and present them as much… not like a typical film.”

Dr. Cook said they are “conscious that we’re not making a film, but rather filming a piece of theatre.”

The theatre and dance program at UAA was discontinued by the university in 2020. This means that no new or incoming students can select the major, and the program is only maintained to teach out existing majors. The current provost was not present during the discontinuation of the program, and Dr. Cook said they may be more open to proposals to keep theatre and dance at the university. This means the time to show support and demand for theatre and dance is now. Viewing information for Machinal will be available very soon. For more information visit the UAA Department of Theatre & Dance Facebook page.