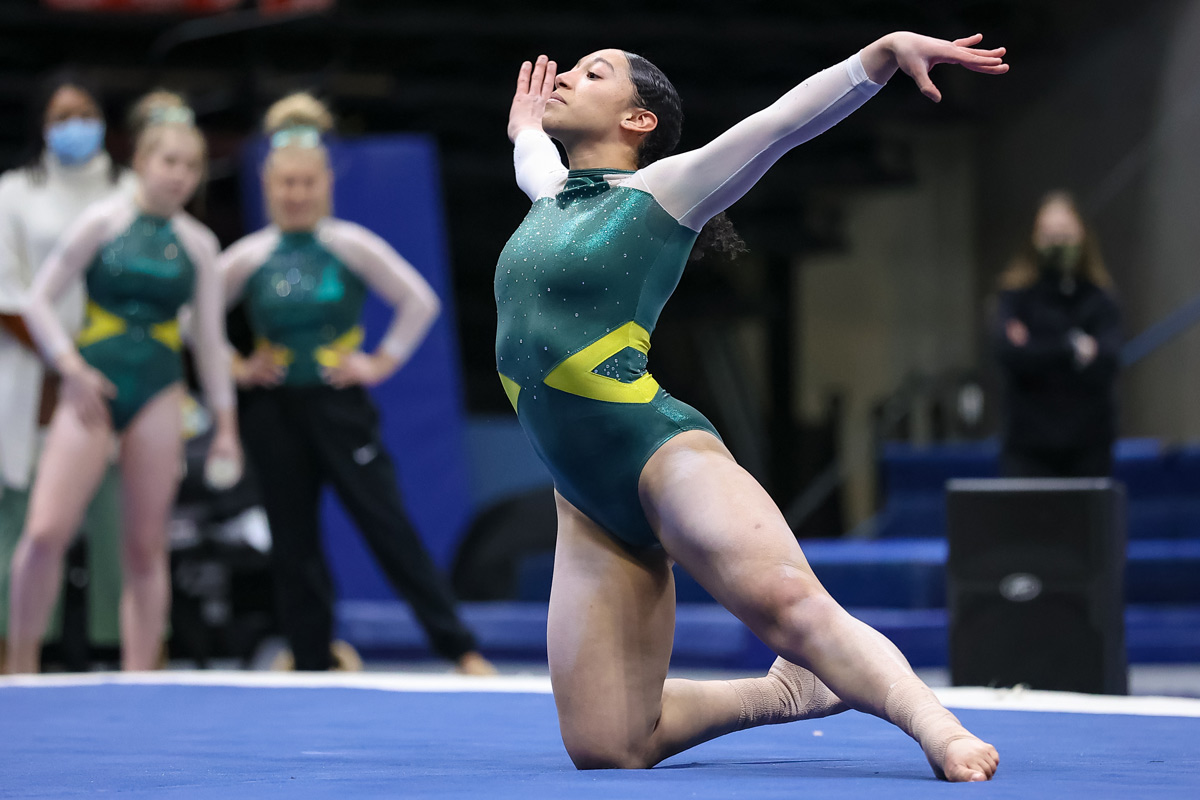 Sophomore Alyssa Manley was one of the gymnasts who competed and fundraised this year. She will return to competition for next years season. Photo Courtesy UAA Athletics/Skip Hickey

The University of Alaska Anchorage Gymnastics program achieved its fundraising goal of $880,000 and earned permanent reinstatement this month.

The program was placed on the chopping block in August 2020 when gymnastics, alpine skiing and hockey were all cut from UAA Athletics in a move to reduce spending.

The gymnastics program was still ferociously taking to social media, cold calling businesses and advocating at university events to raise money into June 2022, the final month of their allotted time, with a deadline on June 30.

On June 22nd, the team announced via Twitter that they had earned permanent reinstatement, successfully raising the $800,000 in cash required by the UA Board of Regents.

Head Coach Marie-Sophie Boggasch spoke to me about the reinstatement, describing the final days of fundraising. Boggasch posted on social media that they had fifteen days left before the deadline, and $6000 dollars left to raise.

Boggasch said: “We just had such outpouring support. It probably was the most amazing day of the entire fundraising campaign. We had people call, text, Facebook message, DM, all willing to get us over that final hump… everybody wanted to rally together to finally be finished.”

Unfortunately, the gymnastics team wasn’t able to celebrate the good news together, owing to the summer break. Boggasch said some members of the team were getting the good news while soaking in the sun on the beach.

Though Boggasch said she and the team were always confident in their ability to hit their goal, she is excited at the prospect of having some of that weight off their shoulders.

That weight didn’t stop the UAA gymnastics team from success on campus, and Boggasch didn’t miss the opportunity to point out her team's record-breaking academic performance — ten 4.0 GPAs and a cumulative of 3.84 — achieved while training for competitions and fundraising.

During the last year, UAA gymnasts have been a common sight at town halls and meetings of the UA Board of Regents, never missing an opportunity to be as visible as possible. Boggasch said that this was planned by the team and that this would continue going forward.

Boggasch said that these public appearances are important: “We never want to be back in the position of being on the chopping block… there is a lot to be said about visibility on campus. We’re making sure that Chancellor Parnell and President Pitney know our faces, know our names… we make ourselves undeniable.”

This approach even extends beyond the campus, as Boggasch described some of her athletes — who had never liked public speaking — getting on a Zoom call with a senator.

Now that the team has been reinstated, it’s finally time for the team to rebuild. Boggasch said that despite being able to compete last year, she couldn’t view it as a rebuilding year because there was a real possibility that it was the last. Boggasch said, “I didn’t know if I was allowed to build.”

Now fully reinstated, UAA Gymnastics will return to competition in the Alaska Airlines Center on Jan. 13, 2023. In an interview with TNL last year, Boggasch said that their competitions in 2022 weren’t yet a huge homecoming for the team because the reinstatement fundraiser still loomed over their head. Though it was too early for the head coach to discuss details, it sounds as though next year's competition will be a more dramatic return for the Seawolf gymnasts.

More details and dates for other events and outings for the team will be published in the fall. the team will, no doubt, have some presence at Campus Kickoff on August 27.