Stick the landing: UAA Gymnastics moves closer to full reinstatement and returns to competition in Anchorage after two tumultuous years 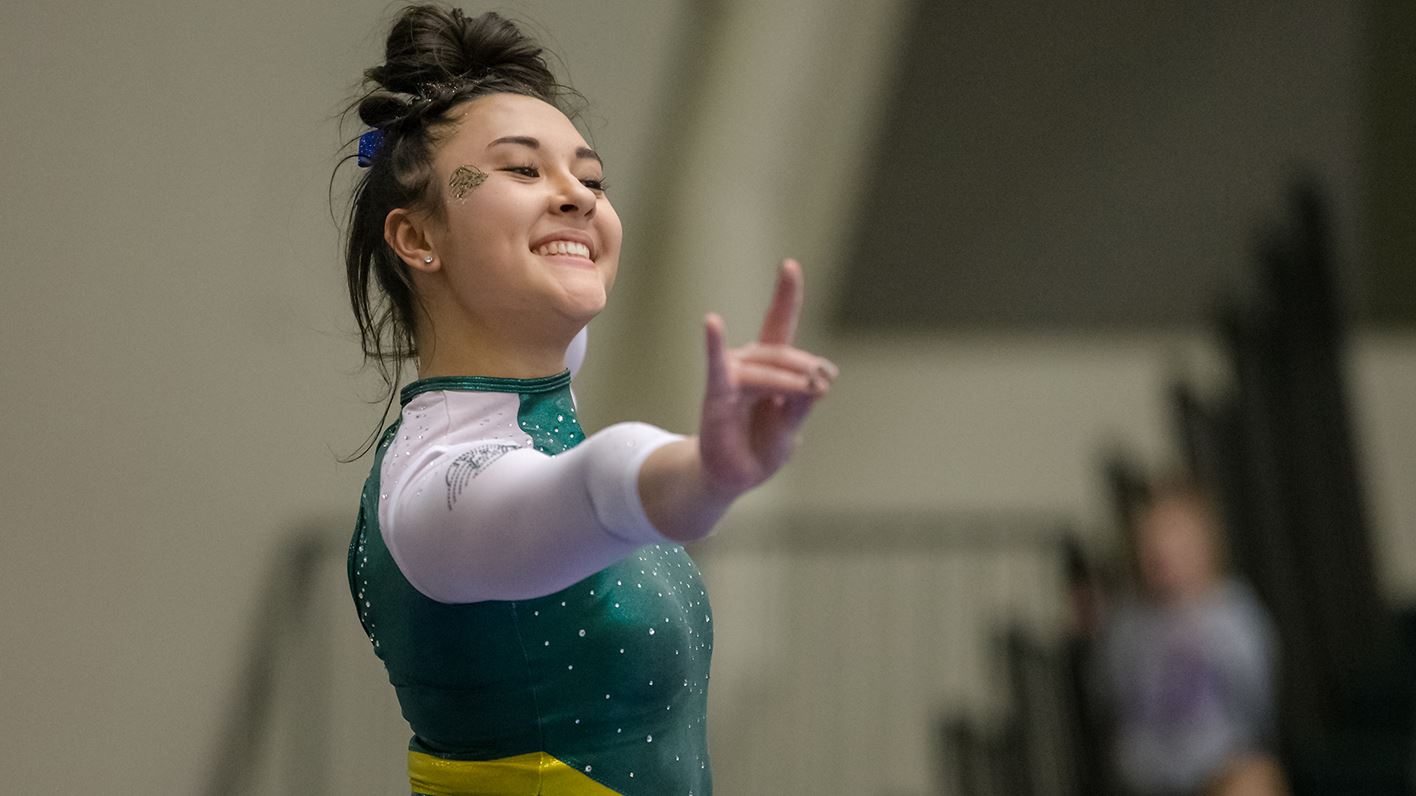 After earning temporary reinstatement in 2021, the UAA Gymnastics team was able to hold the Green & Gold Exhibition. The upcoming February home meet will be their first official competition since early 2020. Photo Courtesy UAA Athletics/Skip Hickey

After more than 700 days, after 23 months out of competition, UAA’s Gymnastics team returns to Anchorage, competing in the main gym of the Alaska Airlines Center on Feb. 11 and 13. The team will be competing against Centenary. The UAA Gymnastics team has been through a lot to get here; having their last two seasons, in 2020 and 2021, canceled by the COVID-19 pandemic, being eliminated by the University of Alaska Board of Regents, being asked to raise nearly a million dollars to earn reinstatement, and even now dealing with COVID protocols, which cost the team their original first home meet on Jan. 21 and 23.

UAA Gymnastics Head Coach Marie-Sophie Boggasch spoke with me about the UAA gymnastics program, discussing the team’s first meet in Colorado on Jan. 28 & 30, the still-in-progress fundraising effort, and the first home meet in years.

The current gymnastics team is overwhelmingly composed of freshmen, with eleven of the fourteen athletes being in their first year. The team also has one sophomore, one junior, and one senior, for a total of fourteen women.

Boggasch described how, because of COVID-19,  only two members of the team who competed in Colorado have ever competed at the collegiate level before, and only one for UAA. “It was all about getting out there and getting a competition under our belt, they were all very wide-eyed, trying to soak it all in.” She said about the first day, “Our team forgot to stand up for awards because they just didn’t know.”

The team had a “rough start,” but Boggasch says that after “having our team eliminated last year, having our season canceled last year, then having our first competition this year canceled already, not knowing if we’d be allowed to go to Colorado even, having that minimal practice right beforehand, I think we were just happy it happened.”

On the second day of the meet in Colorado, Boggasch says the gymnastics team came out “knowing the process, knowing what to expect” and “showed way closer to what we’ve been practicing. It was really a confidence booster.”

The team is competing at another couple of meets, in New Jersey on Feb. 4 and Pennsylvania on Feb. 6, to make up for the canceled meets at the start of the season, and will be returning for their first home meet with a lot more experience, ready to perform for the home-team crowd.

Unfortunately, though the home competition on Feb. 11 and 13 is the first appearance of the gymnastics team at a home meet in years, Boggasch says it’s still not the radical comeback appearance of UAA Gymnastics because the team still isn’t fully reinstated by the UA Board of Regents. “This isn’t the big meet because we’re still working for a permanent reinstatement for years to follow.”

Despite that, Boggasch is clear that this season and this whole year is a win, a win she attributes directly to her athletes, who are the ones who worked so hard to fundraise for reinstatement, who “showed dedication to UAA, even when UAA wasn’t dedicated to them.”

The current goal of UAA Gymnastics is to earn full reinstatement. More than that, Boggasch described a desire to “kind of rebrand UAA Gymnastics, and become a bigger entity that’s undeniable on campus.”

To achieve this goal, the team is keeping up with fundraising efforts, with a sort of soft-relaunch and revitalization of the fundraising tied to the home meet in February. The team is also actively producing a monthly YouTube series titled “Seawolfeonix: First Roar or Final Flame?” where each of the athletes tells their story and advocates for the team.

At the competition on Feb. 11 and 13, UAA Gymnastics will be holding a raffle, a LuLaRoe sale on the upper level of the facility, and a “Stickathon,” where fans can pledge a dollar amount for each stuck landing by the Seawolves. Fundraising will also be held at a club invitational meet on Feb. 12, the Saturday between the Seawolf competitions and also at the Alaska Airlines Center.

Boggasch is hoping that fans and attendees of the competition will be excited, hoping that the team can “provide an event that when people see it, potentially for the first time, that they want to come back.” More importantly, Boggasch hopes that fans and the UAA community “recognize the challenges and adversities this team has faced, really put in perspective how much these athletes have accomplished,” citing the cancellations, the elimination, the uncertainty, and how through it all the UAA Gymnastics team has worked for reinstatement and come back to compete.

The Feb. 11 and 13 meet against Centenary will be one of only two opportunities to see the UAA Gymnastics team compete in Anchorage this year. Their only other competition at the Alaska Airlines Center will be on Mar. 11, against Air Force. That night will also be the team's senior night, where the team's one senior, Kylie Reese, will be honored.