Activision Blizzard sued for mistreatment of women in the workplace, employees stage walkout 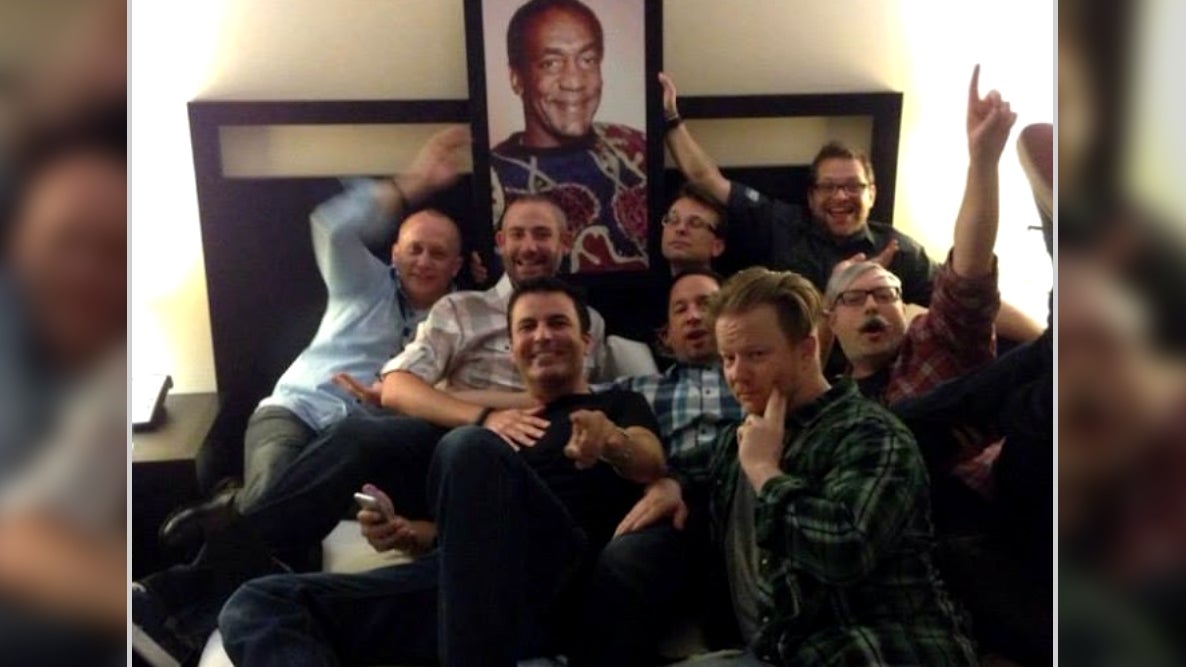 This photo, published on Facebook and obtained by Kotaku, shows Blizzard employees including Alex Afrasiabi, Greg Street and Jesse McCree in the "Cosby Suite" described within the lawsuit.

On Tuesday, Jul. 20, the California Department of Fair Employment and Housing filed a lawsuit against video game developer and publisher Activision Blizzard alleging that the company had fostered a “frat boy” culture that resulted in decades of mistreatment of women employees. The lawsuit is a thirty-page document publically available online, filled with horrific stories of women being sexually harassed, underpaid, passed over for promotions and in one case driven to suicide. Men at the studio are stated to drink at work and play video games, delegating their work to women at the studio.

Activision Blizzard is one of the largest corporations in the video game industry, behind some of the most successful games, including titles such as “Call of Duty,” “World of Warcraft,” “Overwatch” and “Candy Crush Saga.” The lawsuit is directed at the entire corporation, but the majority of the allegations are more specifically directed at Blizzard Entertainment, the studio behind “Warcraft,” “Overwatch,” “Diablo” and “Hearthstone.”

The suit describes the Blizzard workforce as being composed of only 20% women, with leadership that is and always has been exclusively male and white. Women who do reach higher roles within the company receive “less salary, incentive pay and total compensation than their male peers.” This discrepancy extends through all levels of the company, where women are paid less and work more than the men at the studio. The suit states that these claims are all evidenced in Blizzard Entertainment’s own records.

Sexual harassment also reportedly runs rampant through the corporation. The “frat boy” culture is described in the suit as “a breeding ground for harassment and discrimination against women.” Men would come to work hungover, “cube crawl” around the cubicles harassing their female coworkers, discuss their own sexual encounters and joke about rape.

Further claims would be reported in the weeks following the lawsuit by publications like IGN. An IGN report detailed issues with women being refused their own earned paid time off when they tried to schedule appointments related to pregnancy, and that rooms designated for breastfeeding did not have locks, allowing men to come in and “just stare.”

Former Senior Creative Director on “World of Warcraft” Alex Afrasiabi is named within the report as having frequently engaged in blatant sexual harassment with no repercussions. Afrasiabi was so notorious for harassing women that his hotel suite at company celebration Blizzcon was nicknamed the Cosby suite, after alleged rapist Bill Cosby. Kotaku found pictures of the suite from 2013, which included an actual portrait of Cosby.

Women at the studio endure sexual comments and unsolicited advances, groping and worse at the studio. Women of color were at even greater risk. Men in power, even those who were not directly engaging in reprehensible behavior, failed at every opportunity to shut down harassment. Blizzard President J. Allen Brack is directly named within the suit as having received complaints about unlawful harassment, discrimination and retaliation. Members of the Human Resources department were involved in the harassment, and of course, could not be viewed as an effective tool for combatting the hostile work environment. An HR representative was identified in the pictures of the Crosby Suite obtained by Kotaku.

The day after the lawsuit was publicly announced by the State of California, Activision Blizzard released a statement that claimed the suit “includes distorted, and in many cases false, descriptions of Blizzard’s past.” Brack sent an email to employees calling the behavior described in the lawsuit “completely unacceptable,” and pledging to work to find a way for the company to move forward. Activision President Rob Kostich sent an email to staff that said the allegations were “deeply disturbing,” and “not reflective of company values.”

Even as the two presidents seemed at least sympathetic to the hurt of their employees, a third executive, Activision Blizzard Chief Compliance Officer, former George W. Bush Homeland Security Advisor Fran Townsend sent an email to employees attacking the lawsuit, describing it as “truly meritless and irresponsible.” Townsend claimed that she, an executive within the company, had never felt undervalued or disrespected. In the weeks since, Townsend has retweeted an article titled “The problem with whistleblowing,” blocked Activision Blizzard employees who criticized her, then finally deleted her Twitter account and stepped down from the Activision Blizzard King Women’s Network.

Statements were also publicly released by others close to the company, like former Blizzard CEO Mike Morhaime, who claimed he had no idea such things were happening at his company, and former “World of Warcraft” lead systems designer Greg Street, who discussed the need for men in leadership roles to make sure women and minorities are “welcome, happy, and successful.” Morhaime was criticized on Twitter by current “World of Warcraft” Streamer Relations manager Josh Allen, who claimed that Morhaime was “told repeatedly that it was happening and did nothing to stop it.” Street was identified within the Kotaku Crosby Suite images.

In response to all the responses, more than 3000 Activision Blizzard employees signed a letter calling Townsend’s statement “abhorrent and insulting,” demanding change, and stating “we no longer trust that our leaders will place employee safety above their own interests.” The letter concludes: “ We will not be silenced, we will not stand aside, and we will not give up until the company we love is a workplace we can all feel proud to be a part of again. We will be the change.”

As everything unfolded, Activision Blizzard’s social media and marketing were halted, including the promotion of a new “Hearthstone” expansion that did still quietly release on schedule on Aug. 3, 2021.

On Jul. 27, almost a full week after the lawsuit was first made public, the “World of Warcraft” team publicly released a statement that stood starkly in contrast with previous communication from the larger corporation. The statement pledges that the team will work to protect marginalized groups and hold those who threaten them accountable. The statement was sourced from suggestions submitted by the entire team.

Also on Jul. 27., Activision Blizzard employees announced that they would stage a walkout on Wednesday, Jul. 28. They released a list of demands, including an end to mandatory arbitration clauses in employee contracts, an overhaul of hiring and promotion procedures designed to improve representation, publication of data related to employee compensation, and the formation of a company-wide Diversity, Equity and Inclusion, DEI, task force to hire a third party to audit ABK’s reporting structure, HR department and executive staff.

Activision Blizzard offered paid time off to those who participated in the walkout, which was called the Activision Blizzard Walkout for Equality, and ran from 9 am-6 pm. Due to the ongoing pandemic, many members of staff were not actually on location, but #ActiBlizzWalkout trended on Twitter as many around the game industry showed their support.

Ahead of the walkout, Activision Blizzard CEO Bobby Kotick released his first public statement about the situation, calling the company’s initial statement “tone-deaf.” Kotick announced that the company would investigate all claims of harassment, add resources to hiring teams to promote diversity, and enlisted law firm WilmerHale to review the company’s policies and procedures.

Employees responded to the statement “pleased” that company leadership was beginning to strike a different tone but criticized the response for failing to address forced arbitration, worker participation in the oversight of hiring policy, pay transparency and employee selection of a third party for the purpose of auditing HR.

Following the walkout, a coalition of Activision Blizzard employees was formed, called the ABK Workers Alliance, who on Aug. 2 released a letter calling out Kotick for failing to meet employee demands, and especially criticizing the selection of WilmerHale for audit purposes. The letter demands meaningful change, but states that the solutions proposed by Kotick “did not meaningfully address our requests.” The letter describes several issues with WilmerHale’s involvement, including a conflict of interest borne from previous dealings with the two companies, WilmerHale’s known history of discouraging workers’ rights, with Amazon and Uber being given as examples, and the history of the specific partner assigned to the investigation, Stephanie Avakian, who “specializes in protecting the wealthy and powerful.” Activision Blizzard has not yet responded to the ABK Workers Alliance.

Blizzard President J. Allen Brack stepped down on Aug. 3, being replaced by two “co-leaders” Jen Oneal and Mike Ybarra. The announcement included a very small statement from Brack that did not address his role in the allegations, in which he was directly named.  At the same time, Jesse Meschuk, an HR executive, quietly left the company. An investor earnings call held on the same day did not feature any substantial discussion of the lawsuit, as investors chose instead to ask about “Call of Duty” and congratulate the company on a nice quarter.

No further major developments have yet taken place. Activision Blizzard has yet to respond to the continued demands of workers, though some additional pressure has come from major sponsors like Coca-Cola, State Farm and T-Mobile who have at least temporarily suspended advertising partnerships tied to Blizzard’s professional competitive Overwatch League.

A big question for many fans of Activision Blizzard games has been how best to support staff as they work through the current upheaval. Some fans have attempted to start a boycott of Activision Blizzard’s games, but some Blizzard employees have stated this isn’t actually helpful. Allen on twitter stated “if you don’t want to play the games then don’t play the games… just please understand that “I quit playing these games to show support for the people that work on them” is not a thing.” Employees are instead asking supporters to maintain the conversation, elevate their voices, and challenge sexism, racism and harassment in their own lives.

Though Blizzard is in the conversation today, many throughout the games industry are pointing out that this is an everywhere problem. “Assassin’s Creed” and “Tom Clancy” publisher and developer Ubisoft has been mired in similarcontroversy since last year, and “League of Legends” developer Riot Games has previously been sued by the same State of California department.