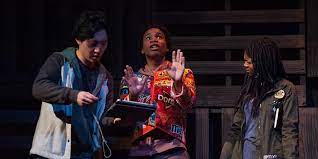 UAA's Department of Theatre and Dance will host a haunted house from Oct. 29-31.

On the weekend of Halloween, from Oct. 29-31, UAA’s Department of Theatre and Dance will be hosting a haunted house in the Fine Arts Building. The haunted house is built across multiple rooms and stages in the building and features student performers from the department and beyond as a collection of spooky characters.  Due to the University’s current COVID-19 mitigation efforts, the experience will be limited to attendance only by students, staff, faculty and their families, closed to the public.

In an interview, Dr. Brian Cook, chair of the Department of Theatre and Dance at UAA spoke about the unique ability of the department to produce a haunted house on campus.

“What’s unique about what we can do here is that our spaces are already set up for lighting and sound,” Dr. Cook said.  “We have costumes on site. We have specialists who can make those things happen for us.”

Dr. Cook described himself not as the director of the production like he would be for a stage play, but rather as the orchestrator.

Dr. Cook explained that the haunted house project actually began prior to the COVID-19 pandemic as an honors project for a student who has since graduated, but that the idea resurfaced as the department grappled with a shortage of students caused by the cancellation of the theatre major at the university. Another appeal to producing a haunted house lies in the opportunity for the students to get outside their comfort zone and try different kinds of acting.

“It’s a viable form of acting and it’s something that’s different… We’re able to give our students that experience, that they know how to scare people,” Dr. Cook stated.

Actors James Peritz and Galena said that the department has never produced a haunted house before, but pointed to some of the department’s previous stage shows, like “That Long Damn Dark” as examples that they can get plenty dark and creepy.

“Theatre is not afraid to take risks when it comes to dark stories, because that’s in some ways what the job of theatre is to tell these dark stories that are kind of uncomfortable,” Peritz said.

Peritz and Galena who play a jack in the box and a living doll respectively, promised plenty of spooks and scares come opening night.

Dan Anteau, technical director in charge of lighting and sound, described the different mindset that he needed to produce the haunted house as compared to a stage show.

“We might do a show and we start at the beginning and then we go into intermission and then we have act 2, we design what that flow looks like. In here I’m looking at each one of these different areas [of the haunted house] as a different scene,” Anteau said.

Unlike a stage production where Anteau could oversee all of the action at once, a haunted house features different rooms, dark corners, it becomes impossible for any one person to view the entire stage at once.

“We’re going to be using a lot of our skills that we’ve honed for theatrical production, we’re using things in a lot of very different ways,” Anteau stated.

Joining UAA’s Department of Theatre and Dance for the haunted house production is Tim Flynn, who Anteau mentioned has previously worked as a professional actor, as well as having a history of producing haunted houses, including some in Anchorage. Flynn’s productions had to make the most of the space he had, Anteau mentioned that in terms of audio, he’s previously only been able to use a boombox or a PA playing scary music and that using integrated lighting and sound at the Fine Arts Building has allowed for new and ambitious possibilities.

The biggest challenge facing the production at this point is the lack of full-time students who can work on the sets. Because the theatre major at UAA was discontinued, and the program is currently teaching out existing students, there are far fewer students in class, in the building, who would have in previous years been actively hard at work every day in the scene shop. Anteau called the teach out demoralizing, saying that normally students would be in the shop helping every day, but right now its only staff, and that some elements of production had to be scrapped simply due to lack of manpower.

I was given the opportunity to walk through the run of the haunted house, nearly three weeks before opening night. The actors weren’t yet in costume, the effects, lighting and sound weren’t yet integrated, but I was blown away with the technical set-pieces and effects already on display. Even without costumes and makeup, the actors managed to elicit screams and shouts from those of us walking through. After the run the actors were collaborating with Dr. Cook and one another, discussing their characters, their motivations and their lines.

Anteau placed a lot of emphasis on the abilities of the actors, describing how the scariest thing in the run was Peritz’s sinister laugh, even before he had his costume or effects to supplement.

Come opening night, Oct. 29, the haunted house will certainly be a great horror experience, a great way for UAA students and staff to celebrate the Halloween weekend.