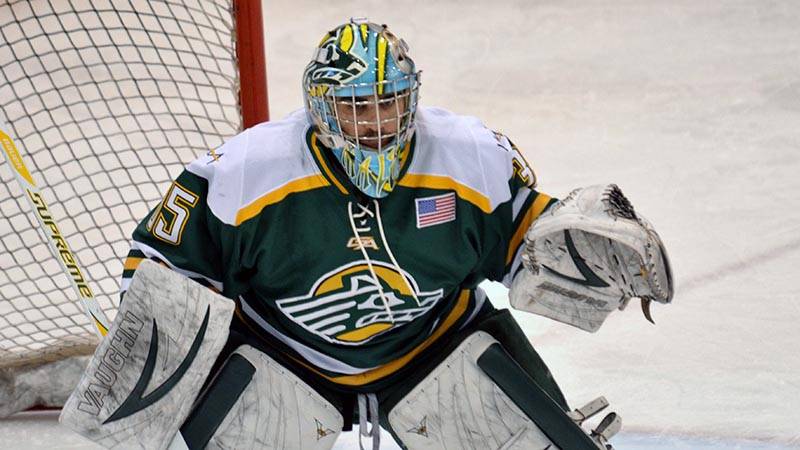 After years away, UAA Hockey is finally returning to competition on Sept. 23. The team hitting the ice will not feature a single returning member from the team that last competed under the Seawolf banner, however. An entirely new team and coach were signed following the team's cancellation, a two million dollar fundraising effort, and reinstatement.

Head Coach Matt Shasby said the unique circumstances surrounding the start of this season are just another challenge to be overcome. “For anybody who likes challenges, I don’t think you could ask for a better situation.”

He said that he’s built a team of athletes who understand the situation they’re coming into, “You present this challenge with every kid you talk to… every single kid, without batting an eye said yes,” Shasby said. “We’re gonna be a team that puts in an honest effort every single day and just try and get better every single day.”

The team will only have one month to prepare for their first exhibition, as players aren’t arriving in Anchorage until close to the start of the Fall Semester, Shasby said. The first day of practice isn't scheduled until the first full week of September.

Shasby said that even though he hasn’t had the opportunity to see everyone together on the ice, he is excited about the team, which is comprised of a mixture of freshmen and transfers.

Adam Tisdale is a graduate student from Alberta, Canada. Shasby said he brings a skill set that will be applicable to multiple situations, capable of creating opportunities on the offensive end.

Ben Almquist comes from the University of Minnesota in Duluth, which Shasby described as one of the best teams in the country. Shasby expects him to be a leader in scoring.

Looking at the defense, Shasby said that Derek Hamelin and Brett Bamber will “be playing big minutes.” Bamber is a top-four defenseman from the Alberta Junior Hockey League, and Shasby said he will be capable of creating offense from the back end.

Shasby expects to heavily lean on the goalkeepers. He said that goalkeeper Joey Lamoreaux is someone who can “hopefully sneak some wins out for us, just from his performances alone.”

Also on goalkeeping duty is Nolan Kent, who previously played for Northern Michigan, playing 30 of 34 games his sophomore year.

Alongside a fresh new team, the hockey program is investing significant money into a fresh new fan experience. Shasby said the team has secured approval to have up to 150 people standing down around the rink, and the team is in the process of installing a brand-new sound system. Also new this year is a student section where UAA students can “go and get rowdy.” In total, Shasby said around a quarter of a million dollars is being spent just on improving the viewing experience as the team returns to the Seawolf Sports Complex.

Shasby hopes that the stands will be packed when Hockey returns to the university. “The 600 seats are going to be full, we’re gonna see people packed down around the bottom of the rink shoulder to shoulder,” he said. “There’s a big generation of young hockey players and young hockey families that really don’t know what college hockey is, and what the Seawolves are and we’re excited to share our product with them.”

The Seawolves have a full schedule, opening with a set of home games on the weekends of Sep. 23 and Oct. 1. The team will see Arizona, New York, Maine, Boston, Northern Michigan and more. Shasby said, “our guys are getting an incredible experience, just the life experience of traveling all over the country.”

Right now, Shasby says he’s most excited about the home opener, “and then, I mean, really every game for us this first year is going to be just as exciting as the next. The nerves are there and I can’t wait to get started.”

Alongside competitions, the UAA Hockey team will be making a concerted effort to connect with the wider student community. This effort begins with a picnic bringing free food to students early in the Fall Semester. Shasby said that people go to specific schools because they want to be “part of that environment, that culture and that community… We’re going to go above and beyond to make sure they feel like they’re a part of something that’s special and something that was a big part of their college experience.”