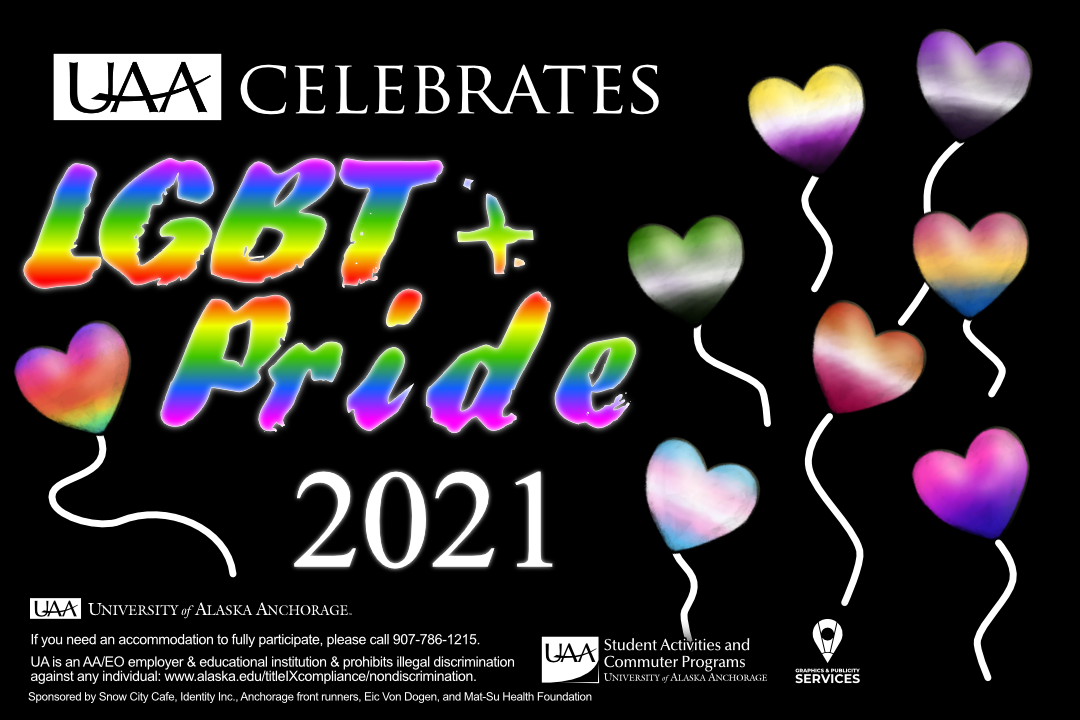 June is National LGBTQ+ Pride Month, and though facilities are still slowly returning to normal operations, there are a few events going on around campus to celebrate. Pride Month is a celebration of all things lesbian, gay, bisexual, two-spirit, asexual, intersex, nonbinary, queer and more.

Earlier in the month was the Lavender Leaders lunch, where community advocates and leaders spoke during a zoom event. Last week kicked off the Rainbow Run, a virtual 5K that encourages participants to wear creative rainbow attire and race virtually to celebrate pride. This is the 22nd year of the race, and all proceeds will go to Identity Inc., a nonprofit LGBTQ+ clinic and community center in Anchorage. The Rainbow Run will run until Jun. 22. UAA also co-coordinated the Soldotna Pride Walk held on Jun. 12 alongside LGBT: An Alliance Group at Kenai Peninsula College.

Festivities are only just beginning, however. Still to come this month is “Translating Transgender Identity Abroad,” an event featuring the Peace Corps, which will feature Peace Corps members stories of identity and visibility during their service overseas. The event will be held online on Jun. 17, at 11am, registration is being held here.

Pride Pour Over Art is being held by the Hugh McPeck Gallery in the Student Union Plaza on Jun 22. at 6pm. The event is open only to UAA faculty, staff, and students who are enrolled in summer courses. Attendees will create marble acrylic pour art using the colors of different pride flags.

The 3rd annual Pride Block Party will be held at The Writer’s Block on Jun. 26, from 2-10pm. The event will be run by Queer Happenings Alaska, and will feature music, food and drinks. This event is family-friendly, and welcomes attendees who are under 18.

Capping off UAA’s Pride month celebrations is the Sunshine and Sandwiches Walk. Attendees will walk a one-mile trail around UAA campus to celebrate Pride, then enjoy some sandwiches from Snow City Cafe and ice cream sandwiches from Wild Scoops.

All of these events with the exception of the Pride Block Party require registration. More information about Pride Month and the University of Alaska Anchorage’s diversity programs can be found here.