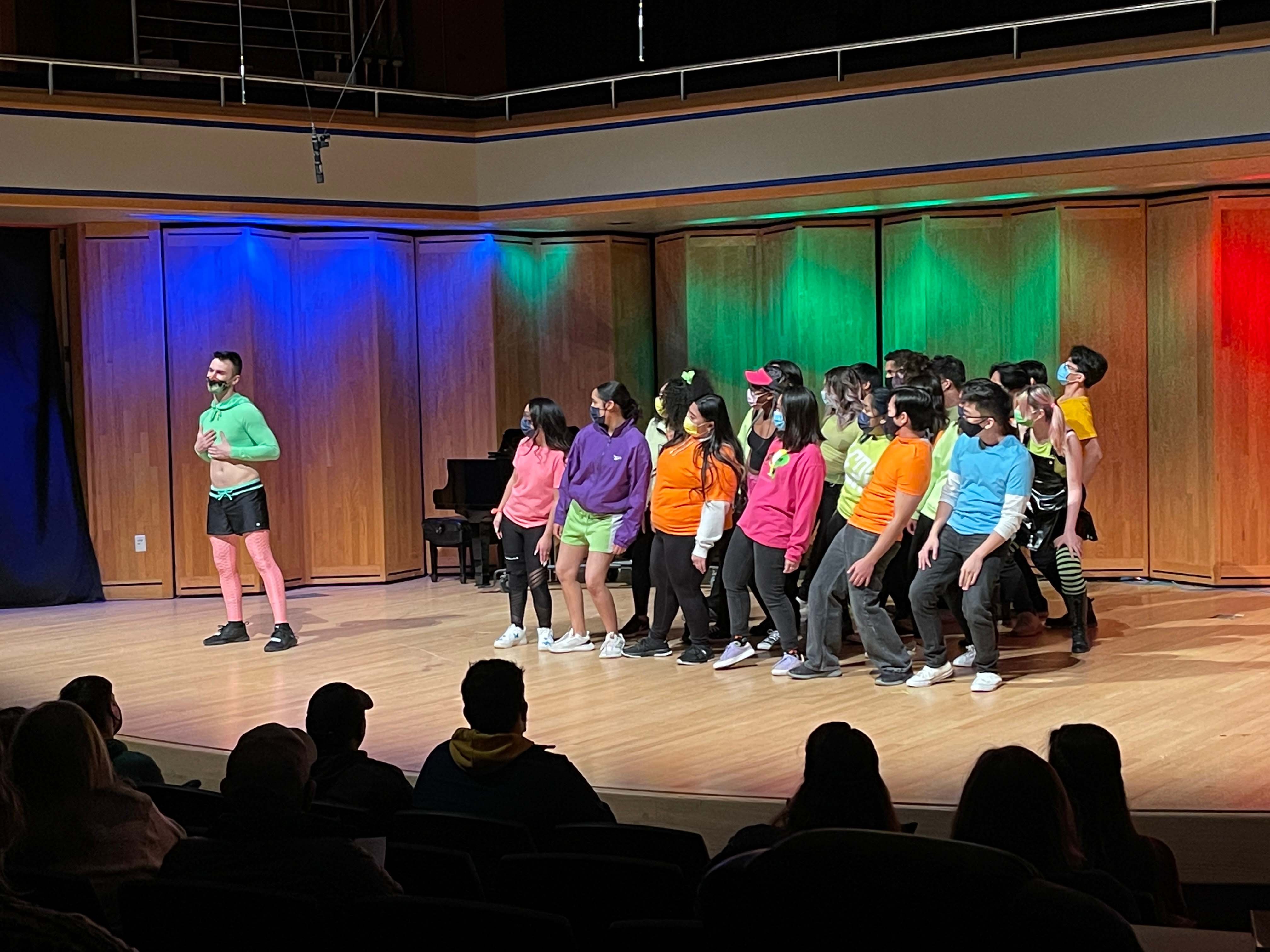 The concert's opening song was a spectacle, with the entire club dressed in bright colors, singing and dancing together. Photo by Jake Dye

The Glee Club at UAA held their Season 22 Fall Concert on Nov. 23 and 24. The concert featured a wide variety of music as well as performances. These ranged from acapella singing to dance performances, a song with a rock band on stage to duets and even one original song. The performance was compliant with UAA mask policy, and the performers did all of their singing and dancing while wearing face coverings.

The concert opened with very high-energy song and dance as perhaps every member of the club erupted onto the stage in neon-colored clothing while singing, rapping and dancing a mash-up of “Good Feeling” by Flo Rida and “Feel Again” by One Republic.

As the club transitioned between songs, members would come on stage and either perform skits or smaller, more informal, performances. The audience witnessed a three-part saga of a man who dared to eat a banana during the production and paid the price. TikTok trends were reenacted. Benji Wrede, president and musical director of the club, came out for one of these transitions and performed a dance solo that had the audience cheering. A personal favorite was a nearly three-minute-long bit to coerce the audience into saying “Head underwater,” a quote from the classic Sara Bareilles track “Love Song.”

The songs performed by the club encompassed a very wide range, representing newer pop songs from artists like Olivia Rodrigo, some Elton John, Disney, Adele, and more than one K-pop hit.

The audience was highly engaged for the entire show, cheering and clapping constantly during the songs. There was really great energy in the room. During a performance of “That’s What You Get” by Paramore, with drums and guitars on stage, a man in the front row played the part of super-fan for vocalist Lydia Smith. He passed roses to her throughout the song, calling “That’s Lydia Smith!” His antics only led to more cheers from the audience.

Admission to the concert was free, though donations were accepted and encouraged. People on or around the UAA campus should keep an eye out for further appearances of the Glee Club at UAA, their energy and talent are certain to provide for great entertainment.

The Fall Concert performances were live-streamed on both Twitch and YouTube, and the entire concert can be viewed on the Glee Club at UAA’s YouTube.

The Glee Club at UAA is currently preparing for its 23rd season and will be hosting auditions on Jan. 15. More information can be found on their Instagram page.