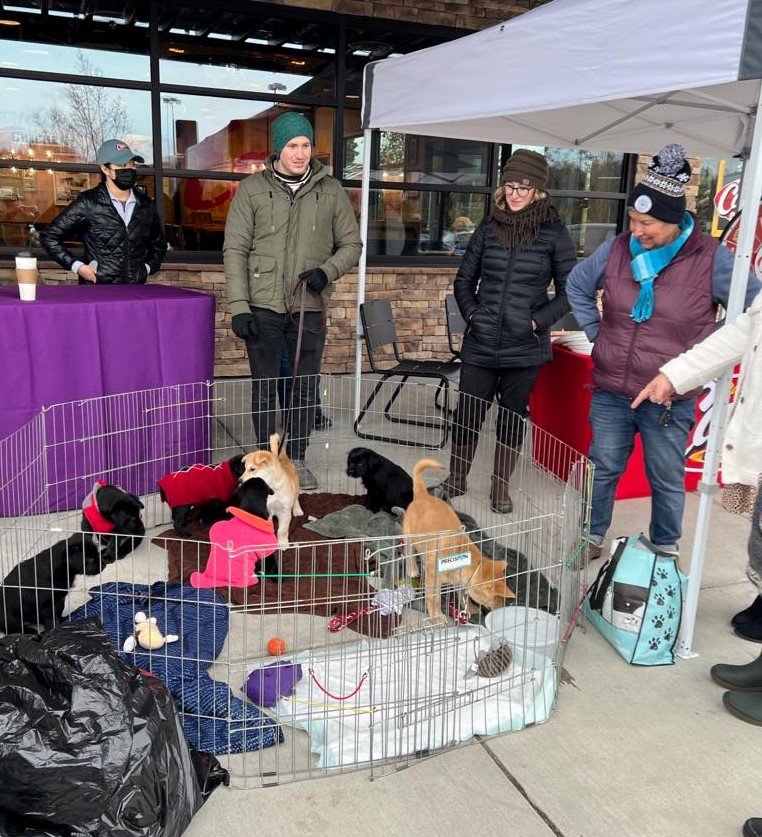 Puppies for adoption at Raising Canes on Muldoon. Photo courtesy of SPCA Facebook.

On Saturday, Oct 15, the Raising Canes on Muldoon hosted an adoption fair for puppies rescued by Alaska SPCA Adoption Center.

Tara McCoy, the Adoption Center Manager, said Raising Canes’ corporate reached out to SPCA via email to pitch this joint event. With a radio host, prize raffles and puppies, McCoy thought the event was a great way to get the Anchorage community involved.

The restaurant's dedication to animal advocacy comes from the owner's love for dogs a Raising Cane’s representative. The founder and CEO of Raising Canes, Todd Graves, named the company in honor of his own yellow labrador.

He originally considered calling it “Sockeye” as a nod to the Alaskan salmon he caught during his time in the state as a commercial fisherman, according to their website. In the last thirteen years, Raising Canes has “donated more than $850k back to local no-kill pet welfare organizations and other pet welfare organizations.” The restaurant has hosted events such as Saturday’s with affiliate partners, including the SPCA and Adopt-A-Pet, in various places around the U.S.

“We work pretty hard to get their information out, put them on social media and update the website. We get a lot of foot traffic.”

They partner with other organizations such as PAWS of Nome and BethelFriends of Canines to help place animals in homes. Many animals with medical cases are received from animal control to be treated by doctors in the SPCA Clinic, and most of the stray animals received by the shelter come from villages, said McCoy.

Dog birth rates in more rural areas can be much higher due to lack of access to neutering and spay services. Sometimes the only measure of population control villages have is putting down animals.

According to an article published in KTOO, shooting sick dogs has been a common practice in villages like the Yukon-Kuskokwim Delta. In 2020, Tuntutuliak received help from the nonprofit Bethel Friends of Canines to vaccinate 50 dogs and funding from the Alaskan Animal Rescue Friends to transport “28 dogs to Anchorage or Bethel for adoption,” KTOO reported.

McCoy said animal welfare and rescues across the country are struggling with rising homelessness of animals.

“Coming out of COVID a lot of people are going back to work and maybe can’t care for their animals anymore.”

According to the Humane Society, there are an estimated 70 million homeless animals in the United States, and only a small portion of them ever make it to a shelter. Even fewer get adopted into permanent homes.

The easiest way to aid shelters in this fight is by volunteering or donating. Anyone 18-years-old or older can volunteer at the SPCA shelter to walk dogs. Volunteer opportunities can be found on Alaska SPCA’s official website.