Movement in negotiations between faculty union and University of Alaska, union threatens strike and legal action 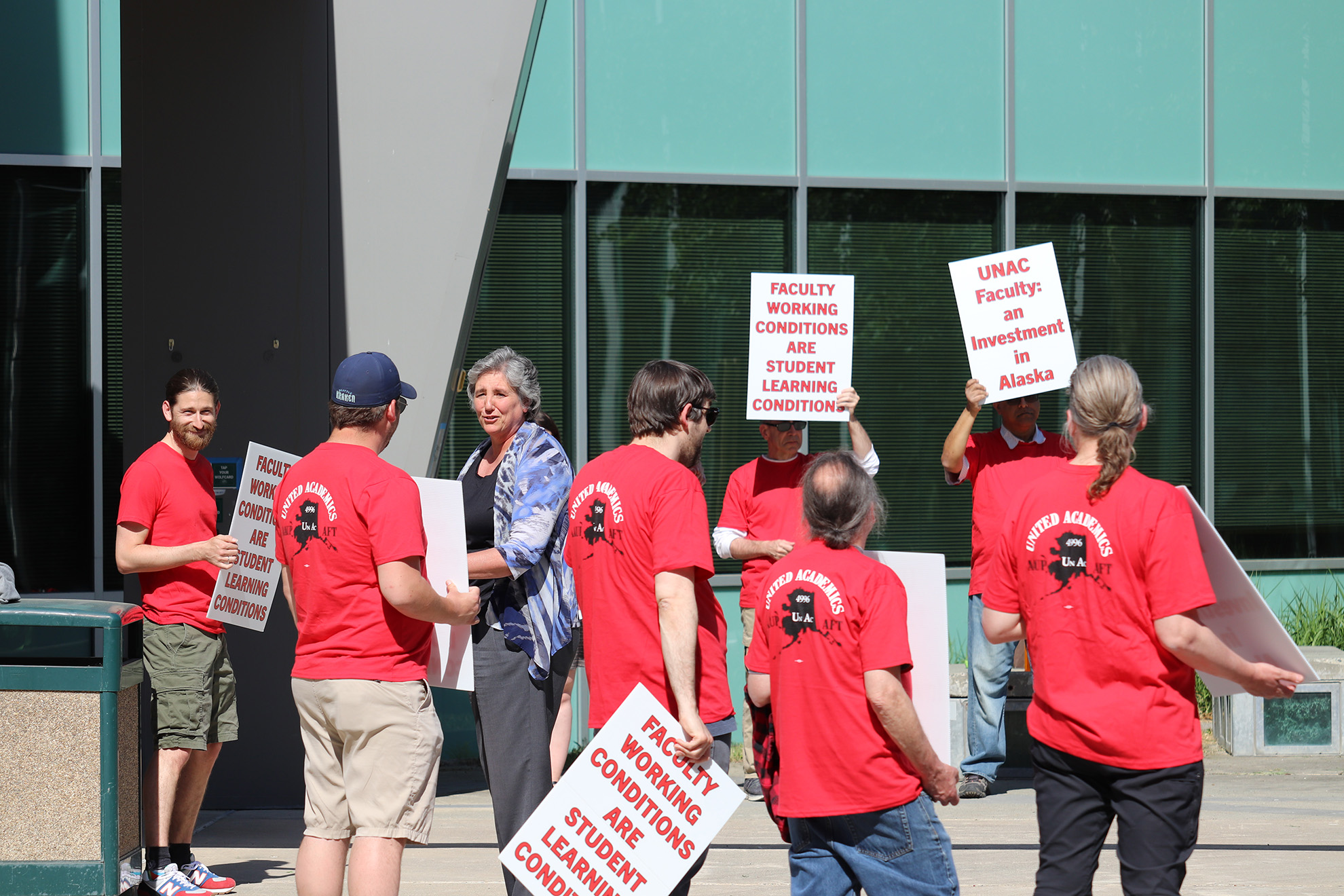 Pat Pitney speaks to protestors from United Academics during UA Board of Regents meetings on June 2, 2022, in Anchorage. (Matthew Schmitz/The Northern Light)

After a deadlock this summer, progress is being made in the contentious negotiations for a new collective bargaining agreement between the University of Alaska and the full-time-faculty union, United Academics, according to a statement issued by UA President Pat Pitney on Aug. 1.

A proposal submitted by UA to United Academics on July 11 included a 3%, 2.75% and 2.5% increase to base pay for full-time faculty over the next three years and a 6% increase to the starting pay of new faculty.

That is up from what UA had called their “best and final offer,” which had 3%, 2.5% and 2% over the next three years and a 3% increase for new-faculty base pay.

The counteroffer sent to UA by United Academics on July 28 largely accepted the monetary terms though there are still 8 articles to be agreed upon. An opinion piece in the Anchorage Daily News, signed by 24 faculty members from the university system, also confirms that the compensation question is mostly settled.

The issue of compensation was one of the biggest sticking points in the long-drawn-out negotiations, which began nearly a year ago.

The previous CBA – which remains in effect until a new agreement is reached – was negotiated in 2016. As previously reported by The Northern Light, full-time faculty have only had a 1% wage increase since then.

The current negotiations have seen each side making accusations against the other, such as UA saying that United Academics has been responsible for the slow progress, and United Academics accusing UA of negotiating in bad faith.

The talks came to a head earlier this summer when UA made its “best and final offer” to United Academics on April 25.

After United Academics rejected the offer, UA unilaterally declared the negotiations at an impasse and moved to implement their proposal, submitting it to the state legislature to be voted upon. The legislature did not take it up, which means that full-time faculty will not see any pay increases this year.

According to a newsletter published by United Academics, the union believes UA acted illegally in declaring an impasse and this contributed to the legislature not voting on UA’s best and final offer.

The newsletter cites Nicole Thibodeau, Alaska labor relations agency administrator/hearing examiner, who was quoted by the Alaska Beacon as writing “to be at a valid impasse the parties must either agree that they are at impasse or the Alaska Labor Relations Agency must make a determination that they are.”

According to a FAQ published by UA that pushes back against this, “state law applicable to the university does not require either agreement by the parties or a finding by a mediator or the Alaska Labor Relations Agency that the parties are at impasse.”

Professor Tony Rickard, who was lead negotiator for United Academics, wrote in an email to The Northern Light that Alaska state statute also requires any contract voted upon by the legislature to be agreed to by both parties.

Rickard wrote, “While [United Academics] hopes to reach an agreement with UA, [United Academics] is prepared to file [unfair labor practices] and/or move toward a strike vote of our membership and, subsequently, a possible strike.” And he described a contract agreement as an “off-ramp” to avoid the alternative of the union striking or filing an unfair labor practice suit.

He also wrote that a strike would place a burden on students, faculty and UA, and that it is something the union would like to avoid.

The president of United Academics, Professor Abel Bult-Ito, confirmed in a follow up email that the decision of UA to declare an impasse is among the reasons why United Academics is looking at possibly filing an unfair labor practice suit against the University of Alaska.

On August 22, UA is supposed to respond to United Academics’ July-28 proposal. If an agreement is reached between the union and UA, the contract would need to be ratified by the union members and subsequently by the UA Board of Regents.

UA Board of Regents