Media Headlines and Highlights in November 2021 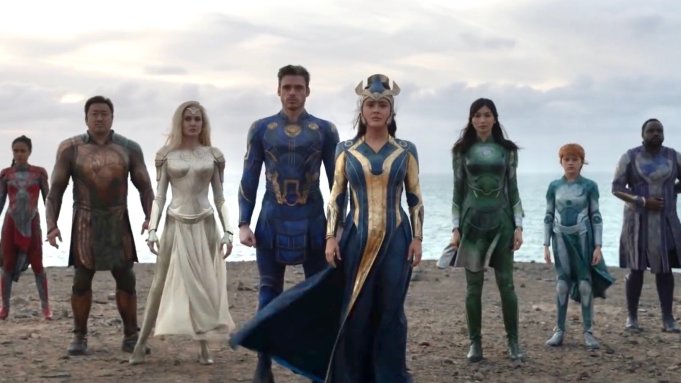 "Eternals" may bite off more than it can chew trying to introduce an Avengers-sized team of superheroes to the Marvel Cinematic Universe. Photo Courtesy of Marvel Studios

When I sat down to write this, I didn’t think there was too much entertainment dropping in November. I was wrong. Looking at the film release calendar, I might be living at my local movie theater, and there’s plenty coming out on streaming platforms and gaming consoles too. Also, look out for Disney+ Day on Nov. 12, which should probably just be declared a national holiday.

“Eternals,” the latest from Marvel Studios, seems to be coming in with very little fanfare. The film is set to introduce a whole lot of characters that until now most people didn’t care much about, and will explore the direct aftermath of the events of “Avengers: Endgame.” Reviews are mixed, and the movie might bite off more than it can chew introducing a dozen heroes and their thousands of years of backstory in a single film. I thought that while the criticism is valid, the characters are more than capable of carrying the weight of the film, and their introduction will be essential viewing for fans of the MCU, before they start showing up in later projects. “Eternals” will be exclusively in theaters on Nov. 5

A sequel to the original two films, about the grandchildren of one of the original ghostbusters, directed by the son of the original 1984 film’s director, if there was going to be a worthy successor to the original “Ghostbusters,” this is it. Early reviews have been very positive and it really sounds like “Ghostbusters” is back. I enjoyed the 2016 reboot quite a bit, but the more subdued and dramatic tone of “Afterlife” really makes the film seem like something special, recapturing some of the light horror elements present in the original film, not so much its two follow-ups. “Ghostbusters: Afterlife”  will be exclusively in theaters on Nov. 19.

Disney Animation Studios have been churning out masterpieces without a single miss for years, and there’s no reason to think “Encanto” will be any different. The vibrant colors of Colombia look stunning. Lin-Manuel Miranda is penning the songs, so they’re likely to become favorites on the Spotify playlist. The film will release exclusively in theaters on Thanksgiving weekend and should be the go-to family option.

“King Richard” tells the story of Richard Williams, the father of tennis stars Venus and Serena Williams, played by Will Smith. The film feels like the sort of Oscar-bait production that usually starts dropping around this time, but the story seems very strong, and the film is receiving very positive reviews, especially in regards to Smith’s performance. The film will be available both in theaters and on HBO Max on Nov. 19.

“Resident Evil: Welcome to Raccoon City” doesn’t look like a great movie. It does look like a fun movie. This is a reboot of the “Resident Evil” film series, telling a story that hems much closer to the story of the games it’s based on than the previous eight films. “Welcome to Raccoon City” promises over-the-top zombie action with a pretty impressive cast of younger talent. The film will be released in theaters on Nov. 24.

I’m not really sure what to expect from“House of Gucci,” a biographical crime drama about the titular family.  The film has a great cast, the trailer looks really dumb in the kind of way I like, this film could go either way. Every time I’ve seen the trailer played at the theater, the audience has popped for Lady Gaga’s final line: “Father, Son, House of Gucci” Perhaps out of curiosity alone, I’ll probably check this one out when it releases in theaters on Nov. 24.

There’s not a lot of details available about “Licorice Pizza,” a film written and directed by Paul Thomas Anderson. The film has a single striking trailer, which was enough to sell me, and is reportedly a coming-of-age comedy-drama. This one seems worth keeping an eye on, releasing towards the end of the month on Nov. 26.

November brings both flavors of the mainstream military shooter with “Call of Duty: Vanguard” on Nov. 5, and “Battlefield 2042” on Nov. 19. “Vanguard” offers a return to World War II, with a lot of focus being put on its story, and “2042” is focused on over-the-top map destruction and emergent gameplay. Both of these games look interesting, but unfortunately, both of these games earned a lot of negative press during beta periods in the last couple of months. Both games are reportedly bug-laden, coming into the holiday release window very hot. Players might want to wait for reviews to make sure the games are in better shape before committing their dollars.

“Forza Horizon 5” brings lots of fast cars to a beautiful open-world recreation of Mexico. The “Horizon” subseries of the “Forza” brand have been known for arcade-style action and shenanigans, and this may be a great pick for some multiplayer fun of a less shooty nature. The game will be available at no extra cost on Xbox Game Pass on Nov. 9.

“Final Fantasy XIV: Endwalker” is one of my most anticipated releases of the year. “Final Fantasy XIV” has been delivering some of the best storytelling in gaming since 2015, and “Endwalker” promises the conclusion to a story that began with its original launch in 2010. Unfortunately, new players cannot just jump in and get started with the new content, as they have to progress through the entire story first, but it all holds up and is worth the investment. Players can jump into a free trial that includes the original game and its first expansion right now to start getting ready for a quick trip to the moon on Nov. 23.

Netflix has a big month ahead, with several new original series and movies dropping. Beginning on Nov. 6, then continuing throughout the month, “Arcane” is an animated series set in the sci-fi/fantasy world of “League of Legends.” I’ve never connected with the gameplay of “League of Legends,” though I’ve been interested in its world and characters for a while. “Arcane” does a great job offering an introduction to the world for newcomers, and I found the first few episodes spectacular. Episodes will drop in batches of three weekly. “Tiger King 2,” a sequel to the endlessly memeable series that dropped right at the start of the pandemic releases Nov. 17. I’m not entirely sure this follow-up can hit the way the original did, with the world in a very different place now, but this is something for all those cool cats and kittens who want more of that story for some reason. On Nov. 19 the service is releasing both its live-action adaptation of the critically acclaimed anime “Cowboy Bebop,” and a musical about the man who wrote the musical “Rent,” “Tick, Tick… Boom!,” directed by Lin-Manuel Miranda. Netflix is promoting “Cowboy Bebop” very aggressively, they definitely want that to be a hit.

Disney+ is celebrating its anniversary with Disney+ Day on Nov. 12, bringing its films “Jungle Cruise” and “Shang-Chi and the Legend of the Ten Rings” to the service for all subscribers. Also dropping that day is “Olaf Presents,” a short series that takes the best joke in “Frozen 2,” where Olaf recaps the previous film and applies it to several of their animated classics. Beyond just the content drops, Disney+ Day will also feature a showcase of upcoming projects, with announcements promised from Disney, Pixar, Marvel and Star Wars. On Nov. 24, the latest Marvel Studios series: “Hawkeye,” premieres, with a charming Christmas vibe, about Clint Barton trying to make it home for the holidays while dealing with an imposter of himself in the form of new hero Kate Bishop.