Hitbox Review: Unpacking - Moving can be fun without the heavy lifting 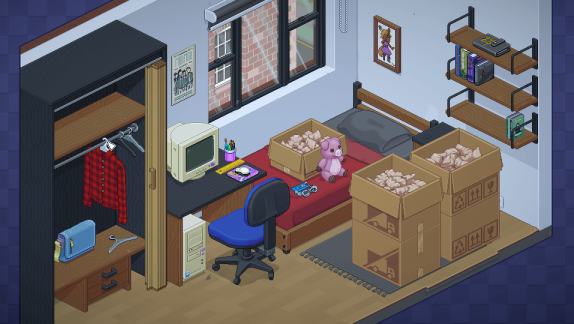 "Unpacking" succeeds based on its premise. What if moving, but without all the hard parts. Photo Courtesy of Witch Beam

Somehow, this game, about unpacking boxes of stuff in static rooms, managed to hit me so emotionally that I teared up. It did so without characters, without dialog, without even really telling me the story. Prior to starting the game, I didn’t even know the game had a story.

“Unpacking” is marketed as a chill game about unpacking boxes and decorating rooms. It really is as simple as starting a level, looking at rooms filled with boxes and then putting things in the boxes on the shelves and tables.

The game’s larger story frames each of the rooms that need to be unpacked. Each of them belongs to the same character, the levels being named after the year that character moved into the space. The game opens in 1997, as a child unpacks their room, the first room that was ever their own. The second room is a college dorm. This proceeded on and on as I basically watched this unnamed and unseen character mature, make mistakes and find themself. It was not the cute little unpacking simulator I expected.

Unpacking boxes is easy, click on a box, an item comes out, it can be placed anywhere. Clicking is done with a mouse cursor, but even playing with a controller, I didn’t have any issues. Once all of the boxes are unpacked, items that are in the wrong place are highlighted in red. Placing items is very forgiving and intuitive for the most part, it's easy to understand where items are meant to go. As the game progresses, spaces get larger, and items can go in different rooms of larger apartments or houses.

When the player clicks on a box that’s totally empty, it shoots up into the air, is flattened, and disappears in a spark of light. It may be the most satisfying thing in video games this year.

There were a very small handful of times when an item would glow red and I wouldn’t be sure where else to put it. Since items can be placed in the wrong boxes, it can even be hard to tell which room it belongs in. I carried a purple blanket around the last level for way too long, desperately placing it anywhere it would fit praying for that red glow to go away. There is an accessibility option allowing items to be placed anywhere, but that wasn’t what I needed. I would have liked some sort of hint, even just showing me a room the item could go in would totally alleviate this issue.

The game does a remarkable job of capturing all the little details of a lived space. A box of tampons in the bathroom, a roll of paper towels under the sink, a child's diary hidden under the pillow are all examples of the game’s attention to detail. Looking at completed areas, they really feel ready for someone to move in. A favorite detail of mine is the collection of recognizable movies and games that the character owns. I was constantly zooming in on DVDs, BluRays and game cases very clearly intended to look like GameCube, Wii and 3DS cases.

Continuity between spaces is established by items recurring, just as they would as any real person moved from one place to another. Because items are all the player really interacts with within the game, they almost became characters themselves. When I pulled a stuffed pig out of a box for the fifth time, I was excited to see it, then excited to place it in the new home. I even became established in the ways I set up my closets and work desks, putting all the underwear in the bottom drawer, the shirts in the top, the jeans in the second.

The soundtrack to the game, a nice mix of acoustic guitar and chiptune stuff, is super pleasant to listen to and does a lot of work towards establishing a wholesome tone. The songs perfectly evoke the emotions of moving and unpacking, bright and excited, but also maybe also a little bit nostalgic and wistful.

“Unpacking” is a simple game, totally accessible to anyone. There are no time limits, no pressures. Players interested in the neat pixelated art style and the promise of chill vibes should definitely give it a shot. The game costs only $20, and it took me around four hours to complete the story. There are a few hidden achievements and secrets that afford a little replayability. The game is available as part of the Xbox Game Pass at no extra cost.