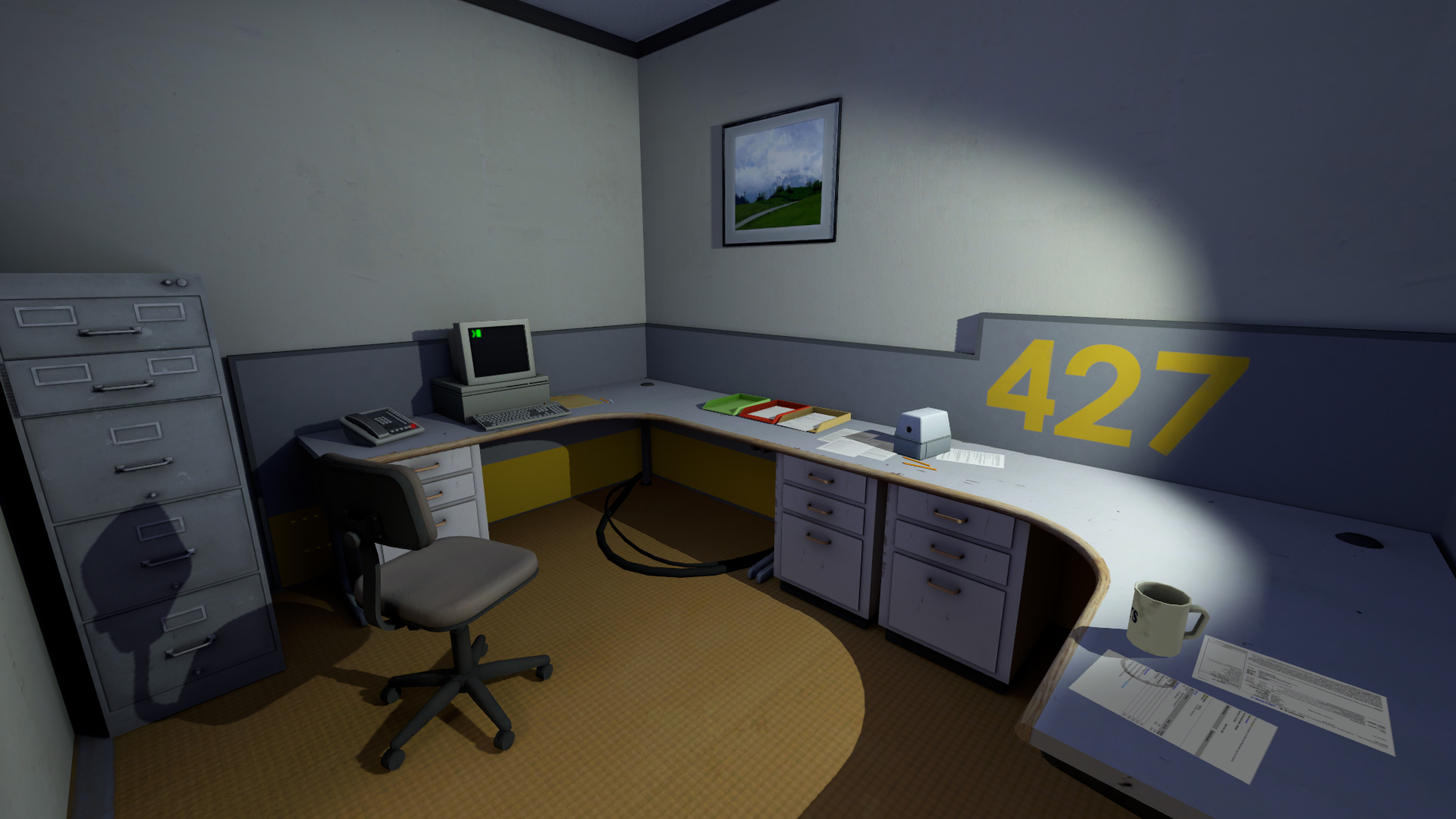 Stanley is employee number 427 in the office building, and he dutifully presses his buttons all day every day. What happens when no one tells him which buttons to push? Screenshots by Jake Dye

In 2013, “The Stanley Parable” was a breakout hit, driven by YouTube lets-plays. People loved it for how silly it was, its varied endings, and its very-meta narrative.  I really wanted to play it. I never did.

The original game was exclusively released for PCs, and by the time I had access to a capable computer, the game’s popularity had largely faded, and I really just completely forgot about “The Stanley Parable” until the 2018 Game Awards, where “The Stanley Parable: Ultra Deluxe” was revealed for release in 2019.

This new release of the game was described first and foremost as a console port of the game, finally allowing the degenerates like myself on PlayStation, Xbox, and Nintendo Switch to see what all the fuss was about. The addition of new content was also mentioned but really never defined. That new content is massive in scope, with a script longer than the entire original game.

In practice, “The Stanley Parable: Ultra Deluxe” is both a 100% faithful port of the original game and an entire brand-new follow-up. That explains why it quietly took three extra years to release.

“The Stanley Parable” was an indie title released on Oct. 17, 2013, that explored the idea of choice in a video game. It starred the titular Stanley as a man who worked in an office. In that office, he sat and pushed the buttons that his computer told him to push all day long. The game begins when Stanley realizes one morning that none of his coworkers have come to work, and no commands are coming to his computer.

Accompanied by a narrator who instructs the player what to do to complete the game, the player guides Stanley from a first-person perspective and investigates the disappearance of his coworkers. The entirety of “The Stanley Parable” is present and playable in its original form in this release, so players don’t need to feel any pressure to experience the original game before diving into “Ultra Deluxe.” This is the definitive package and effectively replaces the original release.

I completed “The Stanley Parable” in 10 minutes. If you follow the narrator’s instructions, he takes you on a short adventure, the titular “Stanley Parable.” but that’s really not what the game is about.

One of the very first things the player sees is a fork in the road, two doors, each leading in different directions. These doors are the basis of the game, its thesis statement. The narrator always tells you to take the door to the left, which leads to the meeting room, maybe Stanley missed a memo. This is the player’s first choice; follow along with the narrator or defy them.

Each of the different choices the player can make leads to one of 19 endings of the game. These endings are varied, interesting and often hilarious. Though any of the endings could probably be achieved in 10-15 minutes each, it's absolutely worth the effort to see them all, and it’s not difficult to see how to achieve them. I went left the first time and saw the “true” ending, so I went right the next time. I went up the stairs the first time, so I tried going downstairs the next.

The narrator has dialogue for almost anything the player can do, really calling into question how much free will the player has if the developers intended and planned for everything. Since Stanley doesn’t speak, the narrator is the only voice the player hears, setting the scene, endlessly talking about his vision for the story and pleading with the player to get out of the broom closet.

The original “Stanley Parable” is a masterpiece on its own that had me enraptured as I completed each of the endings, eventually consulting a guide for a little clean-up at the end to make sure I didn’t miss anything. I would recommend this game to anyone with an interest in video games as a wholly original commentary on video games and game design.

Next, I’m going to discuss the “Ultra Deluxe” new content, and though I won’t go into spoilers, I really think it is best experienced wholly organically. Players with any interest at this point should really just go play the game. Those who played or experienced the original game especially shouldn’t pass this up as just a port.

After completing “The Stanley Parable,” I was finally able to dive into “Ultra Deluxe.” After some time spent playing the game, one of the doors in the office was replaced with a new door that literally said “New Content.” I held off on proceeding through the door until I was satisfied that I had entirely finished what I wanted to do with the original game, but even after going through the door, the old and new content is still discretely separated and the player can choose which to engage with.

The “New Content” is massive. Truly a second game stapled onto the back of the original. There are new adventures for Stanley and new themes to tackle, especially concerning video game reviews and the pressure on the creators to make more “Stanley Parable.”

The majority of the new content is a more linear experience than the base game, more directly taking the player on a ride and telling the story it wants to tell. After a certain point, the player is returned to the original office, with a significant twist: now, the player can choose by effectively flipping a switch whether that run is of the original “Stanley Parable,” or if it is using the new “Ultra Deluxe” content.

Every one of the endings of the original game is revamped for this system, adding 24 new endings to the game for a total of 43. That’s a lot of “Stanley Parable,” but somehow it all managed to stay fresh, and after completing everything, there is a slightly hidden epilogue that ties everything together and puts a final bow on “The Stanley Parable.” Forever this time.

“The Stanley Parable: Ultra Deluxe” as a complete package is one of the most interesting and engaging video games I’ve played. I was wholly engrossed for all my time playing through it and experimenting with endings, and I really couldn’t put it down. There’s no action in the game, though I thought the endless empty halls of the office did get unintentionally (or maybe entirely intentionally) creepy.

For players who, like me, have an interest in video games as a medium, an industry and an art form, “The Stanley Parable: Ultra Deluxe” is a must-play. It may do less for other players, but I still think there’s a ton of fun to be had in experimenting with choices, seeing silly endings, and exasperating the narrator.