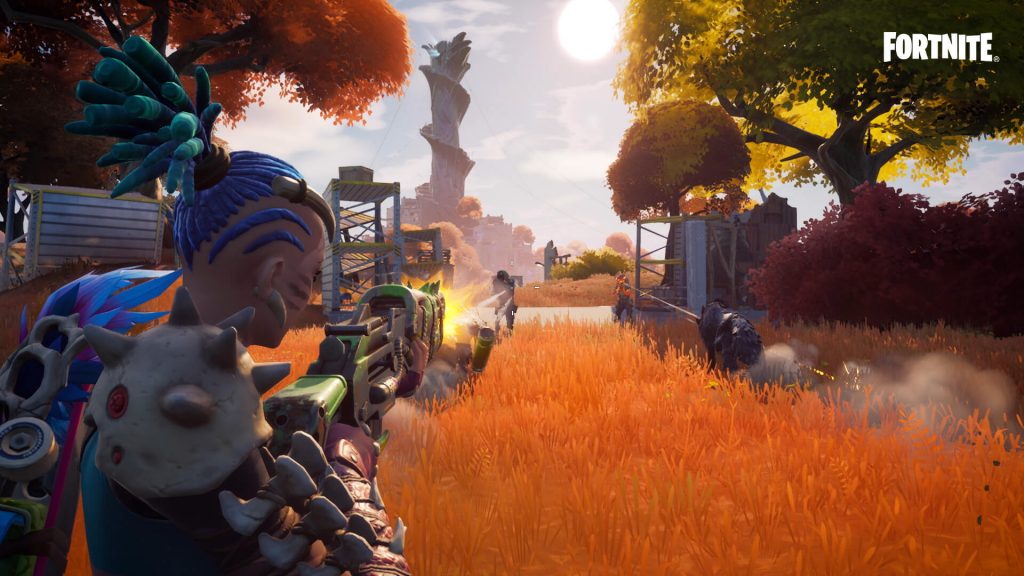 The large battles of "Fortnite" take place on an island caught forever in a time loop.Photo Courtesy Epic Games.

When “Fortnite: Battle Royale” launched Sep. 2017, it was an immediate success, unlike anything the game industry has ever seen. Fortnite changed the industry, leading the push towards cross-platform play and progression, popularizing the battle pass model of monetization, and inspiring countless copycats. Of course, “Fortnite: Battle Royale” was itself a clone of “PlayerUnknown’s Battlegrounds,” taking the formula and making it colorful and free.

Many games tried to follow in “Fortnite’s” footsteps, falling into relative obscurity or outright cancellation. Some challengers rose above the pack, however, and today three battle royale games stand above, competing for players’ time and money. “Fortnite: Battle Royale,” “Apex Legends” and “Call of Duty: Warzone” are the big three battle royales on the market today.

These games are updated constantly, changing and evolving over time. “Fortnite” doesn’t look or play the way it did in 2017. This review will cover each of the big three as of Mar. 2021.

“Fortnite” is the biggest name in games. It makes headlines almost weekly for its incredible crossovers and live events. This is a game where Batman, with Captain America’s shield in hand, can ride down onto the battlefield on top of a light cycle from “TRON: Legacy.” Live events were one of the biggest draws of “Fortnite'' in 2019 when players viewed concerts in-game, met director J.J. Abrams for a special look at “Star Wars'' and watched together as the world was destroyed by a black hole, reborn days later. Live events have become much fewer since the COVID pandemic began, though a new focus has been placed on the game’s story for the first time.

Today, players are jumping into “Fortnite Chapter 2: Season 6,” they land on the island and scavenge for weapons and resources, battling to be the last standing, claiming that sweet victory royale. “Fortnite” is, in my eyes, the worst feeling to play of the big three. Weapons aren’t very accurate, by design, and a lot of value is placed on building walls and structures from wood and other material. It’s become a cliche at this point, but it really doesn’t feel great to take a shot at someone from a distance and then watch them turn into a massive wooden fortress.

A lot of the appeal to “Fortnite”, for me, is the quest system. Daily, weekly, and seasonal quests provide plenty of distractions from the lackluster gunplay. Other players become little more than a nuisance as I explore the island, go fishing and eat a staggering amount of corn. Chapter 2’s sixth season, which began on Mar. 16, 2021, brings a new crafting system that allows for weapons to be modified. Chasing down components to build out weapons to suit my playstyle has so far been another fun diversion.

“Apex Legends” is a joy to play. Gunplay is tight, movement is slick and nuanced and each of the game’s 16 characters has powerful abilities. Combat is the focus here, following on the legacy of developer Respawn Entertainment, a studio founded by veterans in the first-person shooter genre. “Apex Legends” was announced and released on Feb. 4, 2019.

Players drop on one of three maps as the titular legends, scavenging for weapons and resources, battling to be the last standing, claiming the title of Apex Champion. A revolutionary contextual pinging system, allows players to signal where they want to go, request ammo or resources, warn of danger and even thank others for their help, all fully voiced by the characters, full of personality. This encourages collaboration, even between randomly matchmade players, in a way unique to “Apex Legends”

The eighth season of "Apex Legends" began on Feb. 2, 2021, bringing the latest legend, Fuse, as well as bringing changes to the game’s first map, King’s Canyon. March brought the highly anticipated Nintendo Switch port, which was not great, featuring muddy visuals, low framerate and a lack of cross-progression, meaning existing players looking to play on the Switch would have to start from scratch.

“Apex Legends” is my favorite battle royale. I love the world, which originated in Respawn’s debut outing “Titanfall,” and the characters, instilled with so much personality. The focus on incredible movement and gunplay is a big selling point too.

“Call of Duty: Warzone” feels exactly like it should. It’s “Call of Duty,” but battle royale. The feel of the games is impressively realized, killstreak rewards and other perks from the core games are rare loot, and players can even earn their custom loadouts from either “Call of Duty: Modern Warfare” or “Call of Duty Black Ops: Cold War.” Players parachute into the vast fictional city of Verdansk and scavenge for weapons and resources, battling to be the last standing, claiming a Warzone Victory. True to the twitch-reflex fueled multiplayer of the mainline “Call of Duty” franchise, time-to-kill is very low in “Warzone” compared to other battle royales, which can be frustrating, being eliminated very suddenly, often in my case without even discerning where the bullets were coming from.

Unique to “Warzone” is the gulag. Every player, on their first death, is imprisoned in the gulag where they are entered in a one-on-one deathmatch with another player. The winner is returned to play, the loser is eliminated.

Currently, “Warzone” is in its second season since transitioning to support 2020’s “Black Ops: Cold War,” the ninth overall. The season began Feb. 25, 2021. March was rumored to bring the long-teased nuclear missile launch live event to the game, which would bring a new map, but while new teases have been showing up in-game for weeks, the missile, first seen in June 2020, has yet to fire.

Of the big three, “Warzone” does the least for me. The characters don’t have much personality, there’s not much story to speak of, and I prefer the colorful personality of “Fortnite” and the sci-fi world and characters of “Apex” to the military shooter “Call of Duty.” Fans of the franchise should find plenty to love, however, as “Warzone” masterfully adapts the gameplay of the franchise to the battle royale format.