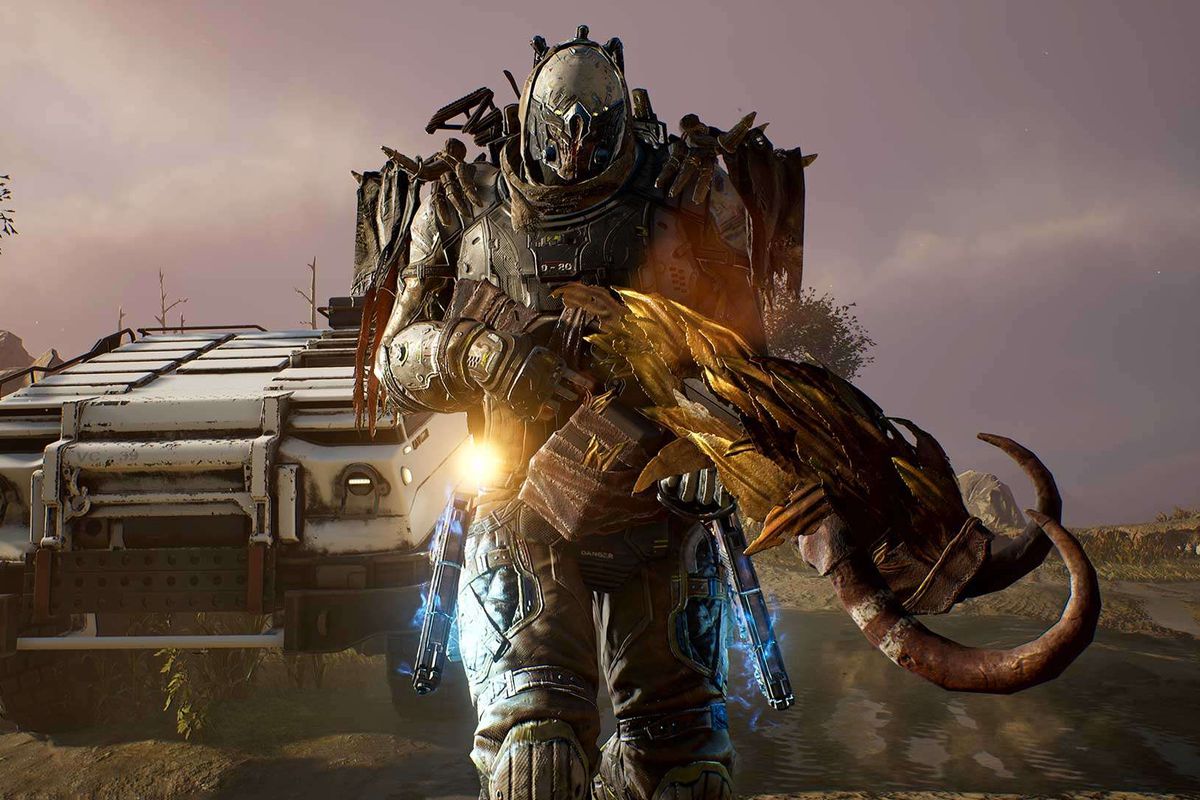 In Outriders, players collect countless pieces of gear, which change the appearance of their character. Unfortunately, transmog or glamor system is in place to allow players to choose how they want to look. Photo courtesy Polygon

Looking at “Outriders,” it’s easily mistaken for a service game like “Destiny” or “The Division.” Players choose unique classes, team up with friends and collect loot with color-coded rarity. Developers People Can Fly insist that “Outriders” is “a complete experience out of the box,” that will not be supplemented with seasons or monthly content. Eschewing the popular games as service format allows “Outriders” a refreshing sense of freedom, where weapons and abilities don’t need to be tuned or trickled out to elongate playtime. “Outriders” very quickly turns its players into overpowered superheroes, because that’s where the fun is.

Taking place almost a century after the destruction of Earth, “Outriders” opens as the only remaining colony ship arrives above a new planet, Enoch. Players become an outrider, a member of the first scouting party sent to check probes and ensure the planet is still a viable home. This scouting mission is completely derailed by a dangerous storm, the anomaly. The anomaly disintegrates most of the scouting party but grants the player fantastic abilities. Injured during the chaos, the outrider is placed into cryosleep, and wakes up decades later, to a world locked in endless war.

The opening to the game is really strong. Cutscenes throughout the game are impressively produced, with a dynamic camera that gives the story a cinematic feel. Unfortunately, after the introduction, when the outrider begins working to fix everyone’s problems and end the war, the plot meanders around for hours, leading to a fairly interesting finale, but not strong enough to recommend the game based on its story. “Outriders” plot is mostly just a reason to cycle through different environments. The game does present some interesting ideas and twists, but these aren’t given the time to breathe or develop, as the game is much more interested in getting back to shooting things.

A highlight of the story is the band of misfits that assemble around the outrider over the course of the story. These characters accompany the outrider for the entire runtime of the game, populating the campsite in each location. Highlights include the team’s mechanic, grumpy old man and survivor of Earth Jakub, and the last living scientist, Dr. Zahedi. Unfortunately, some of the last additions to the team really suffer from a lack of development, making their big story moments fail to impact the way they should.

Gameplay is the real standout of “Outriders.” Players choose one of the game’s four classes, and each boasts a unique playstyle supported by powerful abilities on very short cooldowns. I primarily played the trickster, who manipulates space and time. The trickster takes on a very fast-paced playstyle, teleporting behind enemies, creating a bubble that slows down time, allowing the player to simply walk around incoming bullets or projectiles. Health can only be recovered through combat, in a different method for each class, tricksters regain health by defeating enemies at close range.

The other classes include the devastator, pyromancer and technomancer. Devastators manipulate earth and gravity to dive into the fray of battle, the closest approximation to the tank archetype. Pyromancers use fire to burn their enemies and make things explode. Technomancers operate at the longest range, constructing turrets, healing allies and poisoning their enemies.

Because health can only be restored by fighting, and all of the abilities recharge quickly, “Outriders’” gameplay is tense and exciting, moving quickly around the battlefield constantly on the offensive. When everything works, which is more often than not, the gameplay really shines.

A big component of the game’s progression is the world tier system. Each world tier is represented by a difficulty level. The first few world tiers represent the classic story, easy, normal and hard progression, and then things get wildly out of hand until the 15th, Immortal difficulty. The game automatically puts players at the highest tier available to them, which can make the game staggeringly difficult pretty quickly, especially if playing solo. It’s easy to change world tiers with a couple of button clicks, without even a loading screen, so players should feel free to experiment until they find a sweet spot. I unlocked the seventh world tier but spent most of my time at the fourth.

I played through “Outriders” solo, and while the majority of the experience was great, there were some instances, particularly involving bosses and other stronger enemies where the game felt like it wasn’t designed to accommodate players not playing in a group. Mobile classes like the trickster and the devastator are definitely better equipped to handle things alone, and I worry players attempting to solo content as the technomancer or pyromancer may struggle unnecessarily. The matchmaking system for random teammates is also subpar. Players cannot matchmake for specific content, and the only option is to join a random player’s game, with no real assurance they’re at the same point of the story. I left my party open for random teammates to join, and I only saw two other players in my nearly 20 hours with the game.

Players with a group of friends looking to scratch the looter-shooter itch will definitely be well served here. “Outriders” offers wild powers, tight gameplay and staggering quantities of bad guys to fight. Players on Xbox platforms can even play the game at no extra cost through Xbox Game Pass.