Hitbox Review: Kirby and the Forgotten Land - An unforgettable adventure 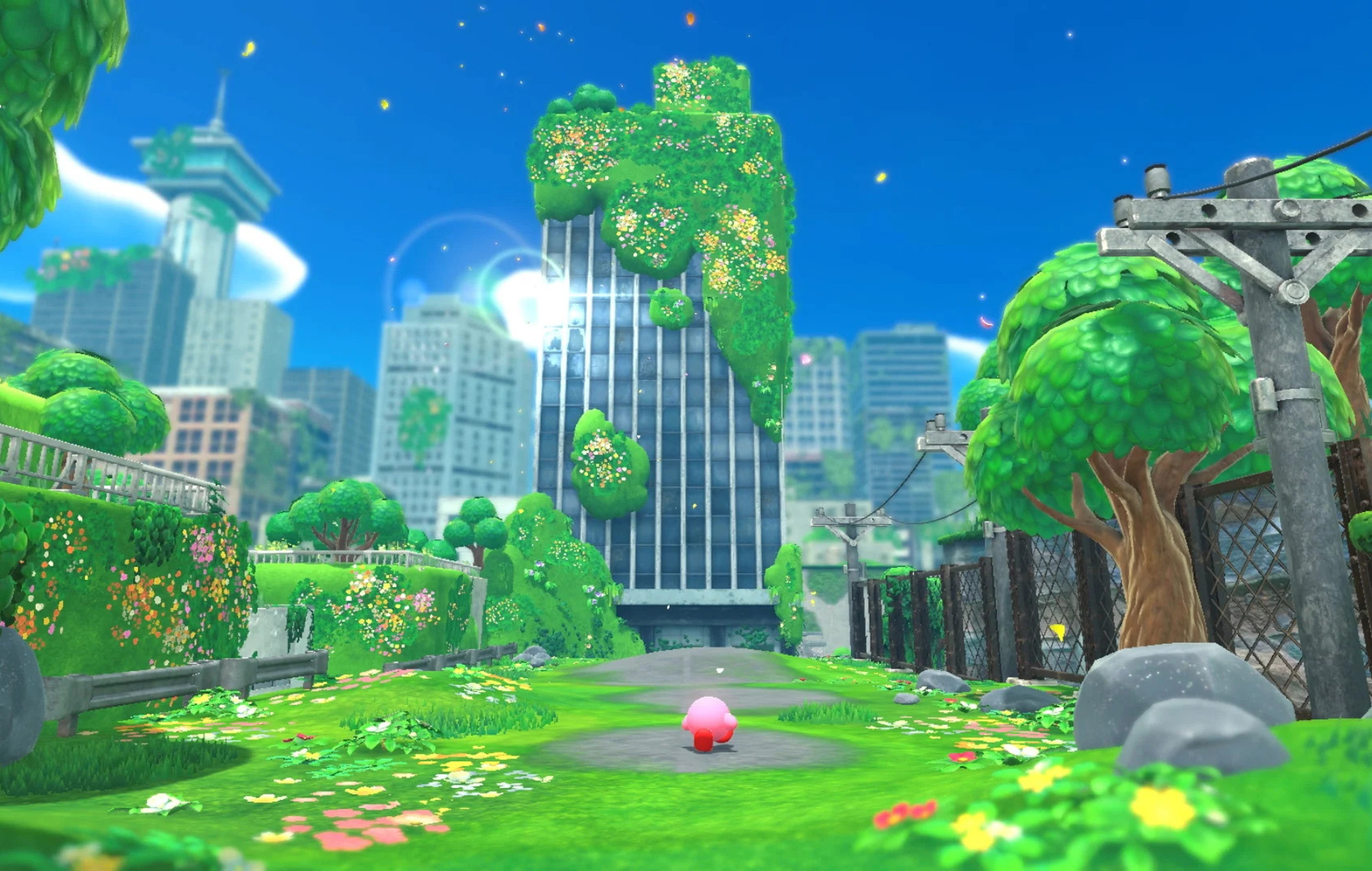 "Kirby and the Forgotten Land" is set in the abandoned ruins of civilization, but proves that even the apocalypse can be cute. Photos courtesy Nintendo.

“Kirby” games have been coming out since 1992. They’ve always felt fairly niche, especially compared to some of Nintendo’s other franchises like “Mario,” “The Legend of Zelda,” and “Metroid.” While all of its peers made the shift into three dimensions, “Kirby” remained firmly rooted in two. “Kirby” games also have a reputation for being very easy.

In those two respects, “Kirby and the Forgotten Land” is a radical reinvention for the character, maintaining the charm of its adorable hero, but presenting players with a brand-new three-dimensional playground, with the challenge turned up at least a little bit.

Kirby is little, round and pink, and he can absorb enemies to take on their power. This ability is kinda gross, but the franchise just glosses over that. When a dimensional rift pulls him from Planet Popstar to a mysterious new land, he must adventure to save the population of little guys who are not pink and don’t have cool powers, the Waddle Dees.

To this end, the player controls Kirby through dozens of levels across several distinct worlds; platforming over obstacles and fighting cute monsters. Curiously, each of the environments takes Kirby through the dilapidated ruins of what seems to be a human civilization. Levels include an overgrown mall, an abandoned theme park and a power plant in complete disarray.

The story of the game is mostly shallow, monsters took Kirby’s friends, and he travels to each location to get more and more back. The finale of the game comes almost out of nowhere and is completely over the top. Questions about the world are answered, crazy anime-style fights are had and I was left stunned and smiling. “Kirby and the Forgotten Land” is fun for its entire run time, but the best is definitely saved for last.

A new ability in Kirby’s arsenal on this outing is “mouthful mode.” Kirby’s traditional ability to swallow enemies and get their powers is a transformation; swallow a baddie with a sword and get a cute hat and a little sword of your own as Sword Kirby. Mouthful mode allows Kirby to swallow large items and just wrap himself around them. It’s disgusting, but we gloss over that too.

Eat a car and drive around in Car Mouth, eat a vending machine and shoot out soda cans as Vending Mouth, eat a traffic cone and spike yourself into the ground, destroying everything in your path as the almighty Cone Mouth!

These mouthful abilities are a clear focus of the game, and are the basis of many puzzles. Though there ultimately aren’t that many of them, the game does introduce new ways to use them, and greater challenges and puzzles to boot throughout its runtime.

Between all of the different forms and mouthfuls, there’s a lot of variety. For the most part, which forms to use is the player's choice, allowing for wholly different playstyles, especially in the boss encounters. I preferred to use the traditional Sword Kirby, but there wasn’t a single ability I disliked.

“Kirby and the Forgotten Land” feels exuberant to play. The soundtrack is spectacular. The environments are bright and colorful, and even the monsters are charming. This game is fun and imaginative, and I was never bored.

A major component of “Forgotten Land” is Waddle Dee Town, where all of the Waddle Dees rescued by Kirby build up a settlement that serves as a home base. Each level rewards Kirby with three Waddle Dees by default, with optional challenges allowing for the rescuing of more than ten at a time. As the town grows bells and whistles are added, like minigames and a coliseum for greater combat challenges.

One of the most valuable facilities in town is the blacksmith, who can upgrade Kirby’s powers. Each form has three stages, requiring blueprints found in levels to unlock. This allows even the forms in use to remain fresh over time. In the early stages, I could be Fire Kirby, by the time I was exploring the amusement park I could be Volcano Fire Kirby and as I faced off with the final boss I was Dragon Fire Kirby.

Unfortunately, the bosses in the game are the only thing that doesn’t stay fresh. The game’s bosses are huge, cinematic, and fun to battle. At least, they are the first time. Each major and minor boss is reused, sometimes constantly throughout the game, in a really baffling way. After fighting the big man with the sword five times I’m not really blown away by the prospect of fighting two big men with swords.

The later bosses in the game do manage to introduce some challenge into what is otherwise a very easy game. This is especially true of the true final boss of the game, part of the hidden true ending of the game after the first rolling credits. That boss was an exceptionally tuned challenge that served as a great capstone to the game.

“Kirby and the Forgotten Land” is a massively charming platformer with inventive mechanics and interesting environments. Fans of modern 3D platformers like “Mario” should definitely give this a try.