Hitbox Review: Inscryption - More than just a game of cards 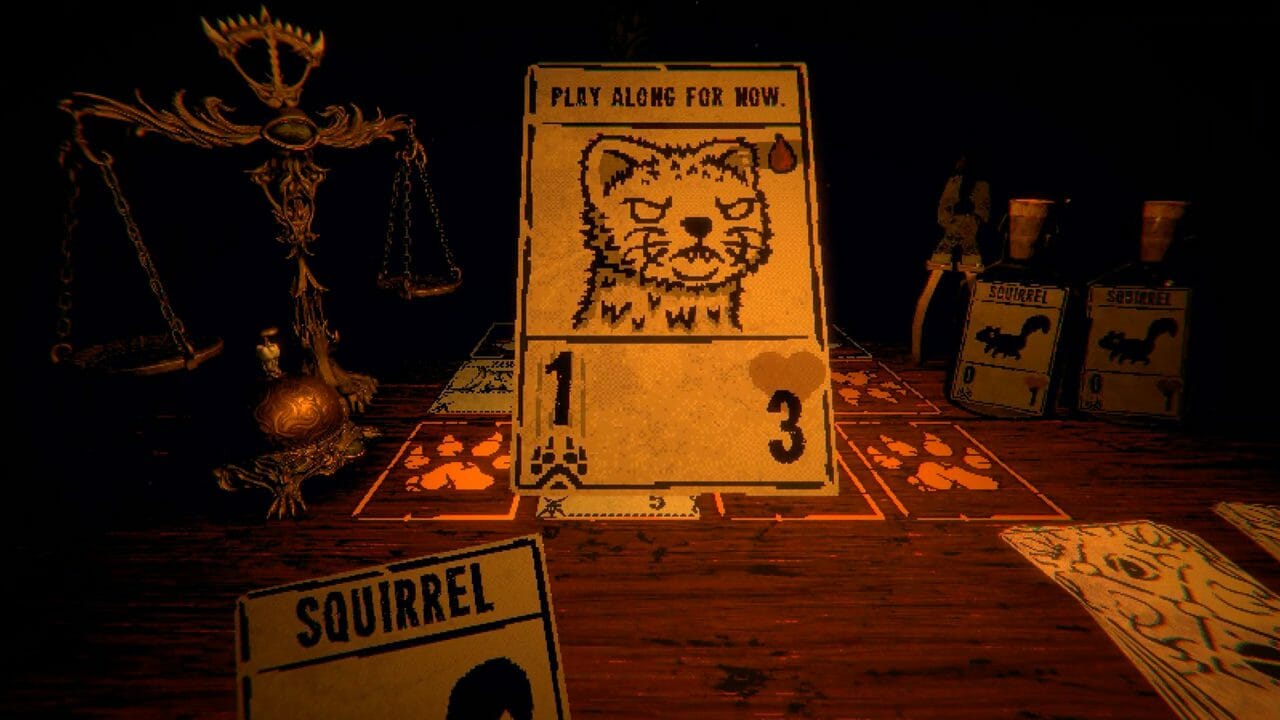 The first sign that something is wrong in "Inscryption" (besides like the whole creepy vibe), is when the cards start talking, just as much prisoners in the cabin as the player. Photo Courtesy of CG Magazine

A game of cards played in a small cabin in the woods, lit only by the light of a few candles. An opponent across the table, only their eyes visible in the shadows. The stakes are life and death. A card is drawn, the stoat, who warns, “play along for now.” This is only the beginning of “Inscryption,” an innovative deck-building horror game that surprised me with wild twists and turns throughout its over ten-hour run time. This is absolutely one of the most interesting games of the year. Unfortunately, it is also one that not nearly enough people will play.

Trapped in the cabin, the game centers around building a deck of cards to overcome the challenging encounters cooked up by the mysterious figure on the other side of the table. They act almost like a dungeon master in a tabletop role-playing game, presenting the player with choices, challenging encounters and putting on masks to embody boss encounters.

The card game being played is the titular Inscryption, which centers on playing cards themed on animals, with attack and health values, on four lanes. The animals can either attack the opposing creatures in their lane or, if it is undefended, they can strike the opponent directly. Hits taken by the two players are represented by weights on a scale. If too much weight is applied to one side or the other, that player is defeated.

The first time I lost a match, a candle was extinguished at the table.

“That was one of two mistakes you get to make in here,” the shadowy figure warned.

I won’t spoil what happens when the second mistake inevitably comes, but it does send the player back to the start of the antagonist’s game, though crucially, not the real meta-game within the cabin.

I don’t really like card games, that sort of heady strategy, planning the perfect deck and capitalizing on synergies just isn’t for me. Fortunately, the card gameplay isn’t terribly demanding, I never felt stuck. The player can seize chances to turn the odds in their own favor through opportunities to upgrade cards, and through items that can be used in battle to radically turn the tides. I found cards I liked, like the almighty Mantis God who carried me through many challenges and constantly managed to keep moving forward.

Playing cards was fun, and the game does a good job of constantly adding more complex and interesting mechanics, but it wasn’t the reason I continued playing. For me, the appeal of “Inscryption” is in its mystery, in its overarching storylines that exist outside the table.

Between matches, the captor allows the player to stand up and walk around the cabin. Guided by the stoat, as well as a couple of other characters who also exist within the cards, the player can interact with things around the cabin and solve puzzles, beginning to form a plan to escape.

Solving puzzles can earn the player new cards for their deck, and can also move the real story of the game forward. At a certain point, the player will be ready to make it all the way through the game at the table.

The boss encounters, of which there are four, are the real roadblocks in the card game. Each of these was interesting, with new and unique mechanics that made them memorable. The rogue-like nature of the game, constantly having to restart the card game upon defeat, didn’t quite manage to become frustrating, but I definitely got a little tired of fighting the first boss again and again.

At around the four-hour mark, I cleared the fourth and final boss of the card game, put my plan into action, and completed the game as I understood it.  Somehow, that was only the beginning of the game.

As I previously mentioned, finishing “Inscryption” took around ten hours. The things that happen inside the cabin with the shadowy figure are only the beginning of a larger and more haunting story. I was satisfied with the short horror story about being trapped in a cabin and forced to play games in a desperate attempt to stay alive. I would have felt the experience complete after defeating the malevolent presence at that table. I, true to the designs and intentions of creator Daniel Mullins, did not truly understand what “Inscryption” is.

I won’t discuss what happens after winning the game at the table, but I will say that the true overarching story of “Inscryption” totally floored me. I really enjoyed unraveling the true mysteries of the game, though I did ultimately feel that a couple of threads were a little undercooked.

It’s a real shame that this small indie game, released exclusively on PC, won’t ever find a huge audience. This game did things I’ve never seen a video game do before, played with the mechanics of being a game and my own perceptions of them in really fun ways.

I would encourage anyone intrigued by the premise of the game to give it a shot. The card game is fundamentally what “Inscryption” is throughout its runtime, but I don’t think that should necessarily dissuade anyone. Players who do give the game a shot should definitely stick around until at least the first big twist after winning the game.

The real barrier of entry for “Inscryption” is that the game is only available on PC. I don’t think the game is terribly demanding from a hardware perspective, and a free demo is available on Steam, which players can use both to get a taste of the gameplay and the vibe, but also to make sure their computer can handle the game.