Hitbox Review: Citizen Sleeper - An engrossing examination of humanity and capitalism in a dystopian cyberpunk future 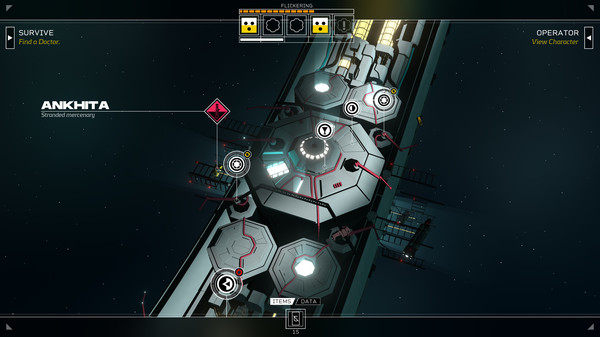 Citizen Sleeper takes place on Erlin's Eye, a space station far beyond its prime. Photo Courtesy Jump Over The Age

Developer: Jump Over The Age

Citizen Sleeper wasn’t on my radar at all until well after it was released. Even when I first heard it described and praised I was skeptical; wake up in the morning with limited energy, plan your day, then roll dice to perform actions. Being limited in that way, and rolling dice to see how well I would complete tasks didn’t strike me as appealing at all.

Ultimately, I tried it because it was part of Xbox Game Pass, and I was completely blown away. This game engrossed me; I couldn’t stop playing it until I had seen a variation of each of the game’s multiple endings and exhausted everything there was to do.

Citizen Sleeper takes place in a dystopian cyberpunk future. To get around anti-slavery laws, giant corporations have devised a system where desperate individuals can become indentured workers, themselves going into a cryo-stasis while a simulation of their mind is put into a machine, turning them into property able to work without any pesky labor laws.

The machines are only able to survive if given regular chemical supplements by the corporation that owns them. Once their contract as an indentured worker is complete, the human will be awoken and paid. The artificially intelligent machine lifeforms who are but fuel for the engines of industry in this world are largely referred to as sleepers.

One of these sleepers stows away in a shipping container, eventually arriving in a state of disrepair on Erlin’s Eye, a large space station abandoned by the corporation that once ran it. Now it's a haven for outcasts, run by smaller companies, gangs, and even a commune on the mostly abandoned outskirts of the station.

Playing as the sleeper, players need to build relationships with people on the station and take on work to fulfill various needs: chemical supplements to continue functioning, food to fuel their body, shelter, and a way to avoid the bounty hunters sent by the corporation. Ultimately, they also need to and need to find a new life and purpose for themselves.

This means working jobs to get money to buy food, maintaining a small stock of supplements to keep running, and making decisions on where to spend time and build relationships with characters.

Everything in the game is based on “clocks.” Going to a specific location displays its clocks. If I take on an engineering job, every time I complete a task at that location I fill in part of the clock, once it's full, the job is done. There are also negative clocks. With bounty hunters on your tail, a clock fills in slowly each day until someone arrives to bring you back to the corporation.

Each morning when the sleeper wakes up, a dice is rolled for each available action. For example, I could wake up with a six, two fives, a three, and a one. Higher rolls allow for a better chance of success. Lower rolls allow for a greater chance of failure. Low rolls aren’t useless though, some tasks provide less penalty for failure, and the sleeper can also hack things, using specific dice numbers to clear security systems. I would generally use all my good dice to get work done and then see if there were any hacking tasks that required a one or a two.

For every challenge, there are multiple solutions. Supplements can be bought from a local gang, or they can be synthesized from local materials. There are a surprising number of friends to make for a fugitive corporate construct; from street food vendors to bar owners, mercenaries to engineers, massive artificial intelligence platforms and even a sweet little girl. There are multiple ways to answer the bigger questions in the sleeper’s life, multiple lives the sleeper can choose to live and multiple ways to stop bounty hunters from coming after them.

Where I think Citizen Sleeper succeeds the most is in presenting this bleak future, driving home the struggles of these people and your own sleeper avatar, but maintaining a general feel of kindness. Though I was constantly on the verge of disaster, always almost out of money and constantly cognizant of the fact that I needed to get some more supplements in the next couple of days, everything always seemed to work out. A perfect balance is struck between struggle and success.

This perceived kindness is best felt in the characters. The game has its villains, but almost everyone the player meets is an ally. Everything sucks in this world, but everyone is in it together. If I need money, the bar owner will let me pick up a few shifts to earn some. There are kindred spirits to be found in a tired man struggling to find a better life for himself and his daughter. There are people willing to help other people, and in that way, Citizen Sleeper comes across as almost radically optimistic.

The game has several endings, based on relationships and decisions made. I appreciated that each of these is largely attainable on a single run. Though I could have gotten on a spaceship and left with two of my favorite characters, I chose to stay behind, watching them leave. Though I could have abandoned the constructed body, I chose to remain in it.

There are several ending scenarios where a choice to go could end the game, but each of these storylines can be completed while deciding to remain and take care of more unfinished business. I would later get on a second spaceship with two of my other favorite characters and see a true ending to the game.

Citizen Sleeper is a mostly quiet, profound experience. The sleeper plugs away and perseveres each day, building a life, struggling to stay alive. The space station is vast and thrumming with activity, but I often found myself feeling somewhat lonely, completing tasks to the subdued synth-heavy soundtrack. Perhaps that’s why I chose an ending where the sleeper left with friends.

Citizen Sleeper is a reading-heavy game, but I would recommend it to anyone who enjoys storytelling in games. It’s relatively short, and its complex systems are surprisingly unrestrictive. The characters are memorable, each brought to life with stunningly detailed artwork. Also, there’s nothing better than a brutal metaphorical takedown of capitalism.