Hitbox Review: Chicory: A Colorful Tale - A lot more than a coloring book 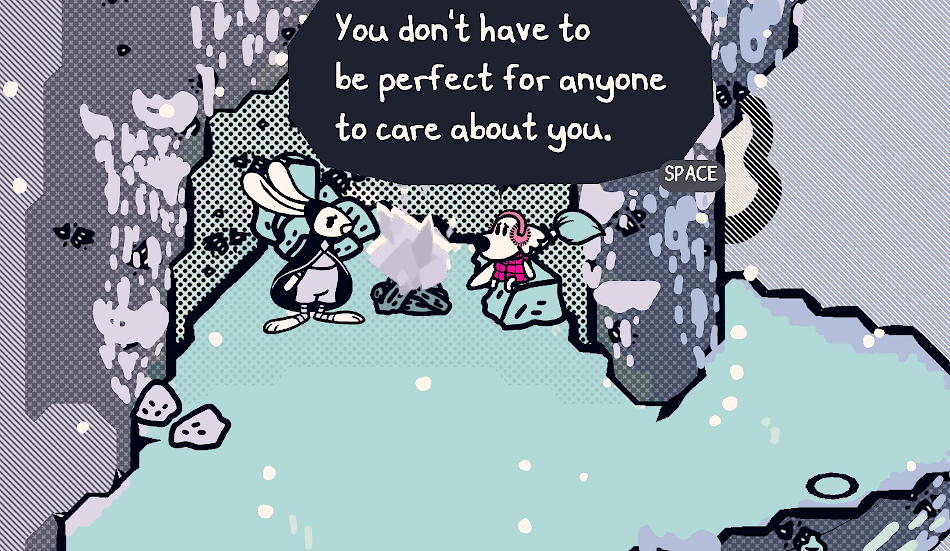 The story of "Chicory" is a conversation about creativity, mental health, and living up to expectations. These conversations are handled with a lot of subtlety and care. Photo Courtesy Fanbyte

When I first saw “Chicory: A Colorful Tale” at Geoff Keighley’s Summer Game Fest, its coloring book aesthetic failed to catch my attention. In the weeks following the game’s release in June however, there seemed to be a huge buzz surrounding the game, and so I decided to give it a shot, going in basically blind. All I knew about “Chicory” was that players used paint to color in its black and white world.

I certainly didn’t expect “Chicory” to be a nearly perfect 2D puzzle platformer, drawing favorable comparisons to older “Legend of Zelda” games. More impressive than the high-quality gameplay is the incredible writing and story. This game, developed by a team of only six people, blew me away. The soundtrack, created by industry veteran Lena Raine, is also a standout.

Players become a janitor working for Chicory, the wielder of a magic paintbrush that is the only source of color in the world. When all the color suddenly disappears, and Chicory goes missing, it falls to the player to take up the brush and do their best to color back in the world, while unraveling the mystery.

The game explores themes surrounding creativity, mental health and ambition. The game looks cute and colorful, and usually, it is. Some sequences get surprisingly dark and even scary. Outside of a handful of boss encounters, there is no combat in the game, and each area of the game is instead filled with platforming puzzles. As the player progresses, they unlock new movement abilities that allow them to access new areas. These abilities also allow puzzles to be skipped on returns to older areas, resulting in a very satisfying sense of progression.

The core mechanic of the game is painting the world. This is done by using the mouse on PC, or by using the right analog stick or touchpad on the PlayStation consoles. It’s left to the player to decide how much or how little to paint, as very little is actually required for progression, but their work will persist permanently in each area they visit. At the end of the game, a timelapse of the entire map is displayed, showing the unique path of each player as they completed the entire game and filled the world with color.

Early in the game, I made an effort to throw around some paint on each screen to liven up the black and white world, but it wasn’t until I found a paint can tool that could fill entire spaces with color that I went out of my way to ensure every part of every screen was filled. Returning to the game after rolling credits, it’s neat to see my own touch on each region.

There are other moments where the player is asked to draw artwork, based on a variety of prompts. The player’s work will permanently appear in the world, at various galleries and exhibits. My artwork was almost without exception barely above stick figure quality, but the game’s characters always react as though they are seeing a masterpiece. Touches like this make the game as a whole a very feel-good experience.

The characters that inhabit the world are diverse and interesting. Every individual on the street can interact multiple times for a full conversation, and the writing for these interactions was so strong that I always went out of my way to see what everyone had to say. There are a few really strong side stories that are too easily missed. A hotel owner requested that I collect evidence to solve the crime of his stolen furniture. The evidence was hidden around a certain area, and initially, I didn’t intend to take the time to find it all.  When I did complete the sidequest simply by accident, the conclusion had me laughing out loud. Delivering all the letters for the postman also results in a very strong moment for some side characters.

“Chicory” also features a strong focus on accessibility and inclusion. The player character is never referred to using any gendered terms. The options include many choices for modifying visual effects to reduce eye strain, wet sounds from the paint can be enabled or disabled because they “might be gross,” and content warnings can be enabled to display before scenes with potentially sensitive content. The way the game handles this content impressed me, as if the content warnings are enabled the player can skip things they don’t want to see, and there are other options to tailor the intense boss encounters, such as increasing the player’s health, slowing enemy attacks or even disabling the bosses entirely.

“Chicory” is an overwhelmingly wholesome and charming game that also tackles harder conversations head-on. The perfect balance is struck, oscillating constantly between depicting and exploring mental health and telling silly jokes. The game can be cleared in around 9-10 hours, and it can certainly appeal to players who, like me, aren’t necessarily interested in a virtual coloring book. The gameplay and puzzles are perfectly tuned, and the story is excellent.