Hitbox Impressions: Cult of the Lamb

Do you have a moment to talk about our Lamb and savior? 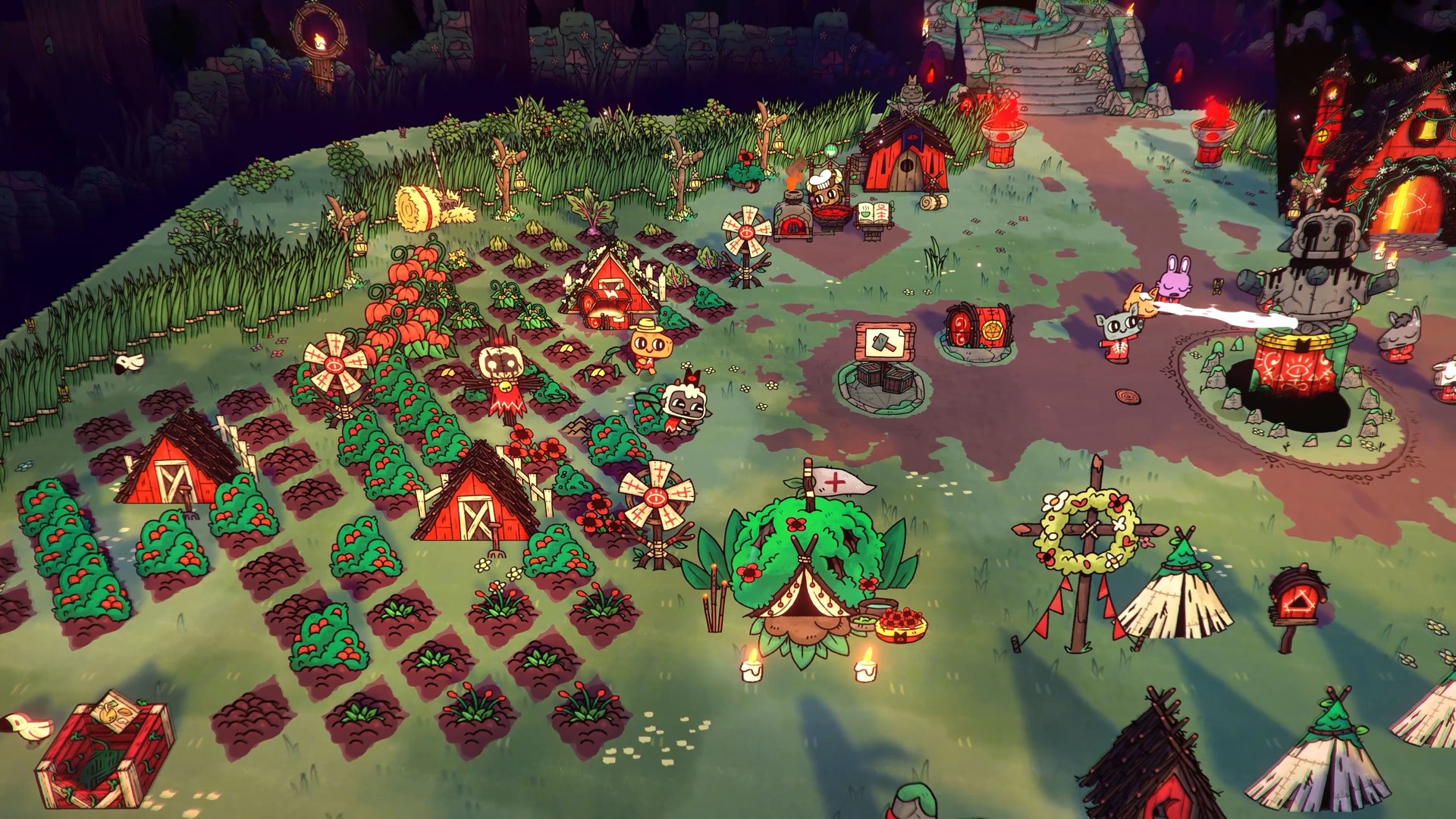 A significant part of the Cult of the Lamb experience is building the eponymous cult. Building structures, feeding residents and growing crops are daily tasks. So is preaching a sermon, declaring new doctrine and holding occult rituals. Photo courtesy Devolver Digital

After spending around five hours as the leader of my flock in Cult of the Lamb, I’m more than comfortable saying this is one of the most interesting titles releasing this year. Five hours puts me only around halfway through the game, but I’ve been charmed at every turn even as I’ve exploited cultists and led crusades against the old faith.

The game is sort of a fusion of wholesome city builder and thrilling rogue-like. Everything is painted with a curious lens of being a cute sheep who runs a vile cult in service of a monstrous demon imprisoned by the old faith.

Roguelike games, hugely popular and prolific in the indie scene, feature runs at randomly generated dungeons where different weapons and perks can be found to craft a character build.

Those who played Animal Crossing during the pandemic will likely find much familiar here. A lot of time is spent at the camp of your very own cult. You have to build resources by chopping down trees or mining rocks, then build structures and develop the community.

Unlike Animal Crossing, the residents of the camp are not your neighbors. They are your cattle.

New members are indoctrinated into the cult and set to the work of gathering resources, worshiping you at a shrine or tending farms. The health and mood of the cultists must be maintained to keep them working, but the game encourages their exploitation, up to the point of sacrificing them to further your own ambition.

Building and maintaining a cult is only half of the action, as the player is also called by their underworldly patron – The One Who Waits – to lead crusades against the four bishops of the old faith who chained them.

Each of the bishops lies in wait at the bottom of one of four dungeons, where the player performs a roguelike style run. A variety of weapons – each with different speeds and effects – are available, as well as a selection of spells to cast and tarot cards that give perks.

Even if the boss isn’t vanquished, other resources and rewards can be obtained. This is the primary method for acquiring additional cultists.

Cult of the Lamb does a remarkable job of balancing tons of interlocking systems without becoming overwhelming. Managing cultists, harvesting their faith and devotion as separate currencies, declaring new doctrines, building structures and managing materials; not to mention the entire combat system. Somehow it all works.

Perhaps the even more precarious balancing act is keeping the game cute, wholesome and, more importantly, tasteful when the subject matter pertains to developing a cult, leading crusades against heretics, sacrificing followers before feeding them to their peers and any number of other macabre exploits.

It’s still cute. The followers are charming, based on any number of animated woodland creatures. The sheep is a lovable protagonist even when brandishing a massive ax and summoning tentacles from below.

For me, at the time of writing, two of the bishops have been vanquished and I’m well on my way to challenging the third. I’ve found it pretty easy. My cultists stay happy and healthy, and I’ve cleared both of the big baddies on my first try.

Even if the game were harder for me, the game is built to constantly increase the players power. Building up the cult regularly increases the base power of the sheep, meaning that no roadblock should remain insurmountable for any player if they’re willing to put in the time to keep growing their power and influence. I haven’t even unlocked the ability to summon allies in combat or sacrifice followers for an extra life.

There are difficulty options, which could make the game even easier or harder, but I really like the game as it is. This is a unique take on the wholesome game, crossing town building with tightly designed action. The cult theme is entirely unique and adds hilarious flavor to almost everything the player does.

I’d easily recommend this game to anyone who likes either simulation builders like Animal Crossing or action roguelikes like Hades. This is a great bridge from one genre to another, and due to its relatively low difficulty, I think it works well as a more introductory game for either genre.

Really, Cult of the Lamb is one of my favorite games this year because it's a delightful surprise. I’ve never played anything like it, and it’s been a fun game to play as I wind down at the end of the night. I’m still actively progressing through it, and I definitely expect to play the game to completion.