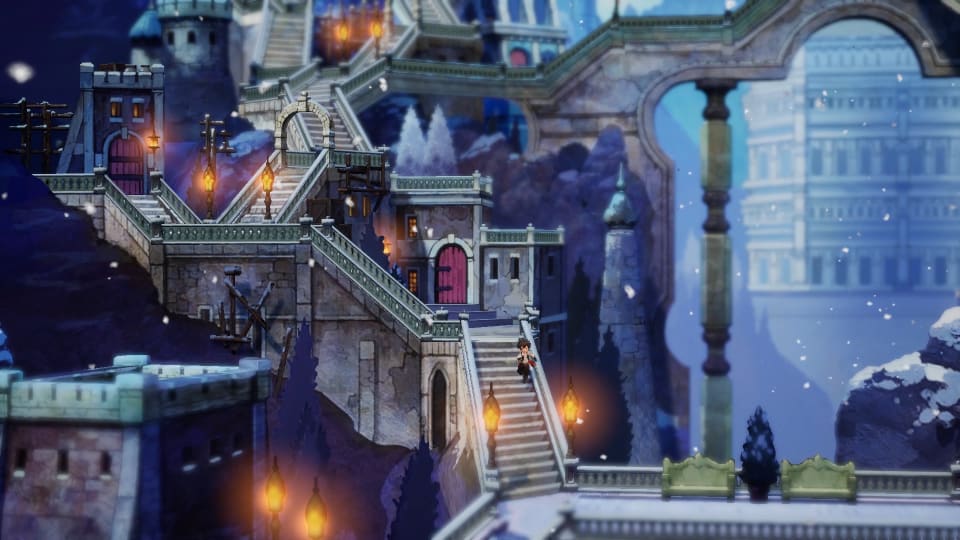 Each chapter has a hub city, and each of these is beautifully realized and unique. Photo Courtesy Nintendo.

The “Bravely” series, of which “Bravely Default II” is actually the third entry, was designed to hearken back to classic Japanese role-playing games, specifically the early “Final Fantasy'' games. “Final Fantasy”, and the games industry as a whole, has modernized and moved away from the classic turn-based JRPGs of the 80s and 90s. “Bravely Default II” looks to recapture some of that magic, featuring a modern take on classic turn-based battling, a job system lifted from “Final Fantasy V”, and a plot about four heroes on a quest for four elemental crystals, the premise for four of the first five “Final Fantasy” games. “Bravely Default II” captures a lot of what made those early games special. Unfortunately, the game doesn’t do much to appeal to a broader audience, and some aspects of the classic design are better left in the past.

I’ve played around twenty hours of “Bravely Default II”. So far, the game’s plot has been serviceable, but nothing special. Following four heroes looking for four crystals to stop an approaching cataclysm, the threat and the villains’ motives are, so far, completely undefined. The plot simply gives the characters reason to move from one area to another and moves along briskly enough that no area outstayed its welcome. I have reason to believe that the story gets much more interesting by the end, but it’s a big problem for the interesting story content to be locked behind such a significant time investment.

Though the main plot has been unremarkable, the game’s four playable characters: Seth, Gloria, Elvis and Adelle are surprisingly fleshed out. Much of this work is done through optional conversations within the party, that build up the motivations and personality of each character. These can be about the smallest details, like an early scene where Adelle has a pair of shoes repaired instead of replaced because Elvis gave them to her. I’ve enjoyed seeing the relationship between the characters develop slowly in these small conversations as the heroes travel together.

Core to “Bravely Default II” is the job system, which allows each character to take on 24 different classes. Each character can take on two jobs at once, as well as select five passive abilities obtained from leveling jobs. This allows for countless combinations and customizations for the party. Strategizing which jobs to level to mix and match abilities to build the perfect team is engrossing. Unfortunately, the rate at which jobs are unlocked is slow, as each unlock is tied to a boss, and only two jobs are available at the start of the game.

Though the plot falls short, “Bravely Default II” thrives on its combat. Turn-based combat is given a modern spin in the form of the Brave/Default system. This allows players to Default, skipping their turn and allowing them to expend it later, taking two actions at once with the Brave command. This small new feature adds a lot of complexity to combat. The Brave command can even be used with no turns saved up, allowing characters to perform up to four actions at once, but then they cannot act until they’ve made up the three turns they overdrew. Combat really shines in the games’ challenging bosses.

Perhaps the biggest issue with “Bravely Default II” is its reliance on level grinding. The game often expects the player to halt their progression and spend a while vanquishing enemies to raise the level of both their characters and each individual job. Level grinding was an irritating requirement even in the classic JRPGs. I would estimate that at least five hours of my playtime was spent roaming the fields and deserts in search of experience, rather than actually adventuring towards the next boss or story beat.

“Bravely Default II” wears its inspirations proudly, to both its benefit and detriment. The game would be easier to recommend to a wide audience if it had a stronger story, but those looking to dig into its deep combat and job system will find a lot to love.