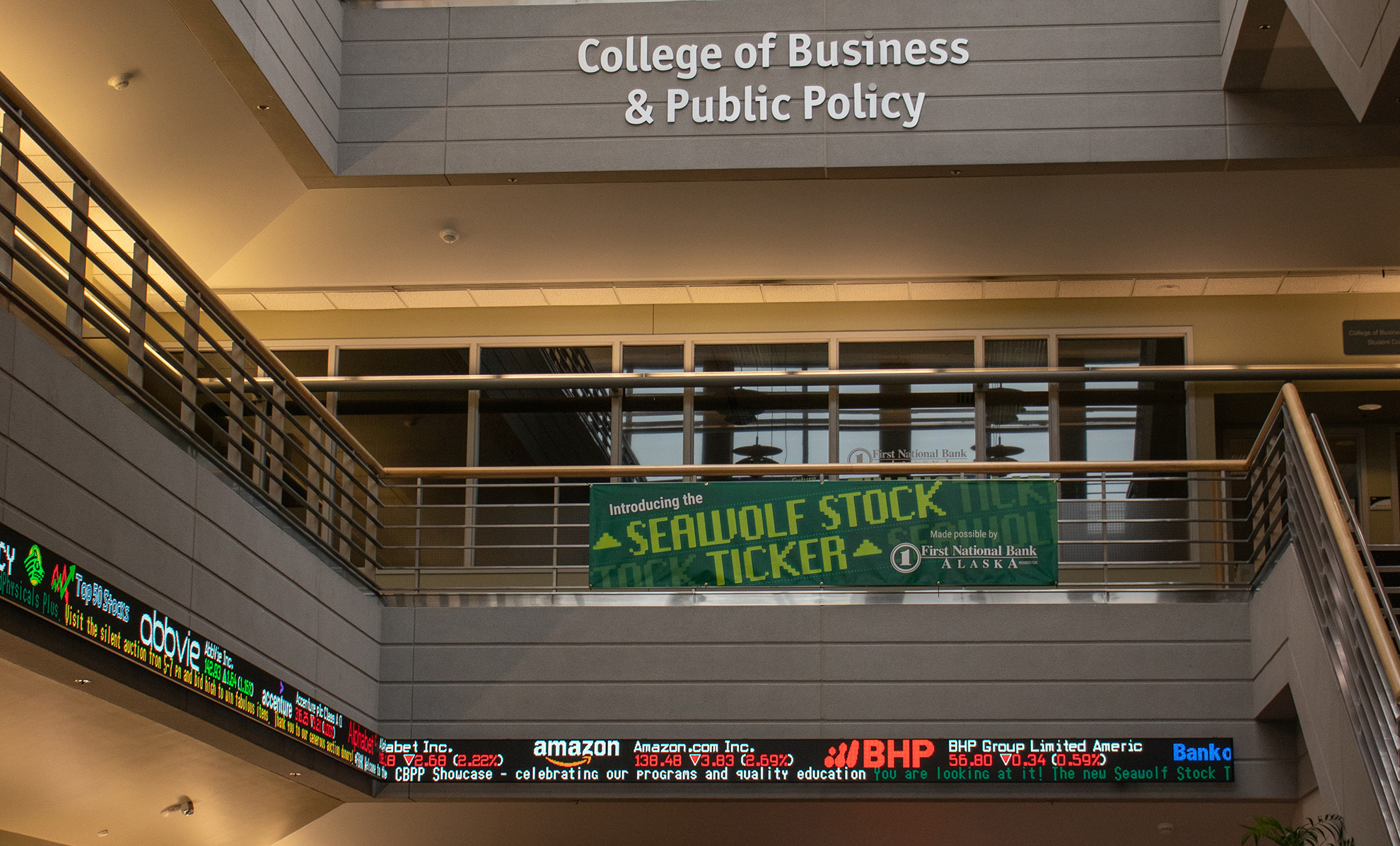 On Aug. 18, UAA’s College of Business and Public Policy hosted their Showcase event in Rasmuson Hall.

Tickets were open to the public, and from 5 to 7:30 p.m. guests had the opportunity to meet with researchers from the Institute of Social and Economic Research, learn about education programs in the CBPP, and network with the college’s professors and leadership.

According to an email from CBPP Associate Dean Terry Nelson, the CBPP met with various clubs and business organizations to promote the event, and reached out via social media and personal connections as well.

Nelson wrote that, including volunteers and presenters, there were over 400 people confirmed to attend.

The CBPP is accredited by the AACSB, and Nelson wrote that the Showcase helped to fulfill the organization’s societal-impact accreditation requirement. The AACSB accreditation is held by only 5% of the world’s colleges, she added.

The new Seawolf Stock Ticker in Rasmuson Hall also got its official launch at the CBPP Showcase.

CBPP Dean John Nofsinger, who came up with the idea, led the countdown to inaugurate the ticker marquee – which wraps around the opening in the 2nd floor of the hall – and Chancellor Sean Parnell marked the moment by ringing a commemorative bell – in the same way the opening bell is rung in the New York Stock Exchange.

The ticker shows up-to-date prices of the 30 stocks that make up the Dow Jones Industrial Average. Nofsinger said ticker can also show sports scores and important information for UAA students. Donations from First National Bank Alaska helped to pay for it.

There were hors d’oeuvres catered by Wild Fork,which included Little Smokies in puff pastry, bruschetta crostini and Swedish meatballs. In addition to that were several wines for wine tasting. Attendees could have seven ounces, and the amount was tracked by marking their entrance wristbands.

UAA’s mascot Spirit was present to take photographs with participants, and Mischa Shimek, a classical guitarist and graduate of the CAS, provided music for the evening. Attendees also had the opportunity to bid on several different items in a silent auction, such as Alaska Airlines tickets, a dinner with Chancellor Sean Parnell or a tour of the Port of Alaska.

According to the CBPP’s website, proceeds from the auction would go to support scholarships and programs in the CBPP.

The evening was split into three different sessions where guests broke off into small groups and presenters gave talks in the various rooms of Rasmuson on the programs and work of the CBPP.

Some topics included information on the CBPP’s occupational educational certificate in cyber security, demonstrations in the Alaska Data Science and Artificial Intelligence Lab, and an opportunity to play a market trading game used to teach UAA students about supply and demand.

One of the options available at all three sessions was a chance to meet and speak with researchers at the ISER, which is under the CBPP. Associate Professor Jen Schmidt talked about the online map they developed that shows wildfire risk for the Anchorage and Mat-Su areas.

Also, ISER’s Bob Loeffler had a scale with blocks used to educate students on the state’s budget and how it's balanced. The blocks were marked with different colors that represented a different form of income or spending.

During the second session, Associate Professor Soren Orley, Pat Berry and Brandon Clark gave a presentation on fraud and UAA’s Justice for Fraud Victims Project, where students can work on a real fraud case for smaller organizations that normally wouldn’t be able to afford an investigation.

According to the presentation the project has identified around $3.5 million in suspected fraud since it began ten years ago. They also talked about the profile of a typical fraudster which included such traits as a type-A personality, being a woman and no prior criminal background.

The event also offered a good opportunity for participants to network. In the third session, Professor Amy Green – the only professor teaching courses on hospitality – gave a talk about the university’s hospitality program. In attendance were members of Alaska CHARR, a group that educates and advocates on behalf of the hospitality industry in Alaska. Sarah Oates, CEO and president of Alaska CHARR, introduced herself to Green and expressed an interest in collaborating with her in the future.

Nelson wrote that the idea for the Showcase came to her after attending the Palmer Museum’s Sip & Shop, their most successful fundraiser.

The AACSB accreditation required the CBPP to identify their societal-impact focus – which was found to be a quality education – and she wrote, “I thought [the Sip & Shop] would be a concept that we can use to invite the community in to gain knowledge about the great programs that we have and the quality education that the College of Business and Public Policy offers.”

Their goal for the event was 250 people, which they nearly doubled. Regarding if the Showcase will occur annually, Nelson wrote that is yet to be determined though it is a possibility.

Other UAA colleges who helped with the event were the College of Engineering, which partners with CBPP on the AI Lab, and the Community and Technical College Culinary, whose students helped with the wine tasting.