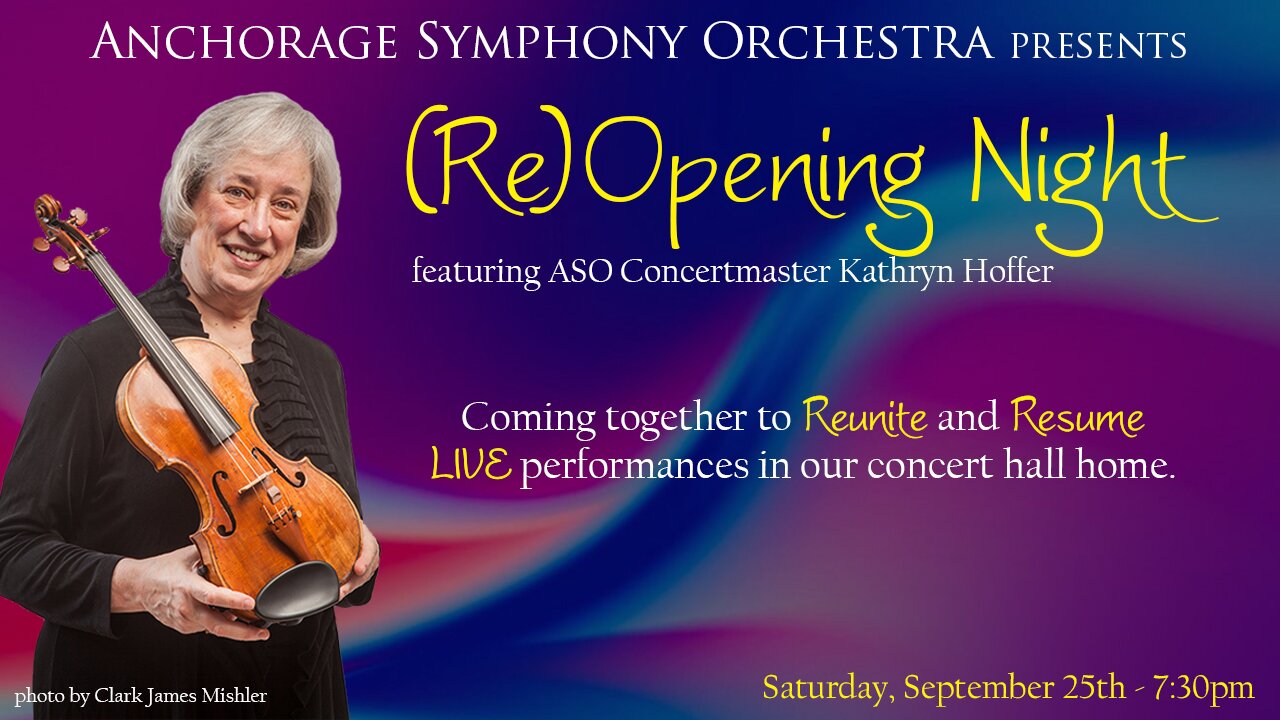 Kathryn Hoffer's violin performance during the Beethoven piece was heavily promoted ahead of the show. It was indeed pretty neat. Photo Courtesy of CenterTix

The Anchorage Symphony Orchestra kicked off their 76th performance season on Sep. 25 with “(Re)Opening Night,” held at the Alaska Center for the Performing Arts. Attendees were able to join the orchestra either in the auditorium or via an online streaming option. The event felt almost like a celebration, ASO’s first performance in 576 days. This was also the first performance by the orchestra to ever be broadcast live.

The event’s tone overall was exuberant.

“I’ve never been happier to see an audience,” a speaker from the orchestra exclaimed.

However, the orchestra did hit some somber notes, paying respect to the late Randall Craig Fleischer, who had been ASO’s director from 1999 until his passing in August last year. Fleischer’s work was celebrated with a performance of “Yup’ik Dance,” a movement from his longer piece, “Echoes.” Authentic Native Alaskan dancers and drummers joined the orchestra onstage for the performance.

Other highlights from the show include the performance of Beethoven’s “Romance No. 1., Op. 40,” featuring ASO concertmaster Kathryn Hoffer on violin, as well as Antonín Dvořák’s “Symphony No. 8 n G Major, Op. 88,” the four movements of which took up the entire second half of the performance following the intermission.

To mitigate the risk of COVID-19 while hosting a significant number of people within the auditorium, the Alaska Center for the Performing Arts required face coverings, as well as proof of either vaccination or a negative COVID test. Rapid tests were available on site prior to showtime. Even the performers on stage were wearing masks when possible. Performers using string instruments like violins or cellos wore masks throughout, while woodwind players who needed to put reeds in their mouths did not.

While viewing the performance via the live stream, I noticed that some of the brass players, the trumpets and french horns, seemed to be putting their instrument mouthpieces right up and into their masks. Brass players were wearing special masks designed to work with the mouthpiece of a brass instrument, according to an email sent by Marketing & PR Director Jennifer Cargile. Similar accommodations could not be made for the woodwind players because the masks would interfere with and possibly even damage their reeds.

Cargile also pointed out that the brass players  had special coverings over the bells of their instruments, another COVID-19 precaution.

“(Re)Opening Night” is the first of several performances by the Anchorage Symphony Orchestra in their 76th season. “Renegades” is the next show, scheduled for Nov. 6, followed by American Voices on Jan. 22 and Virtuosity Feb. 26. The season will conclude with a “Season Finale” on April 9.