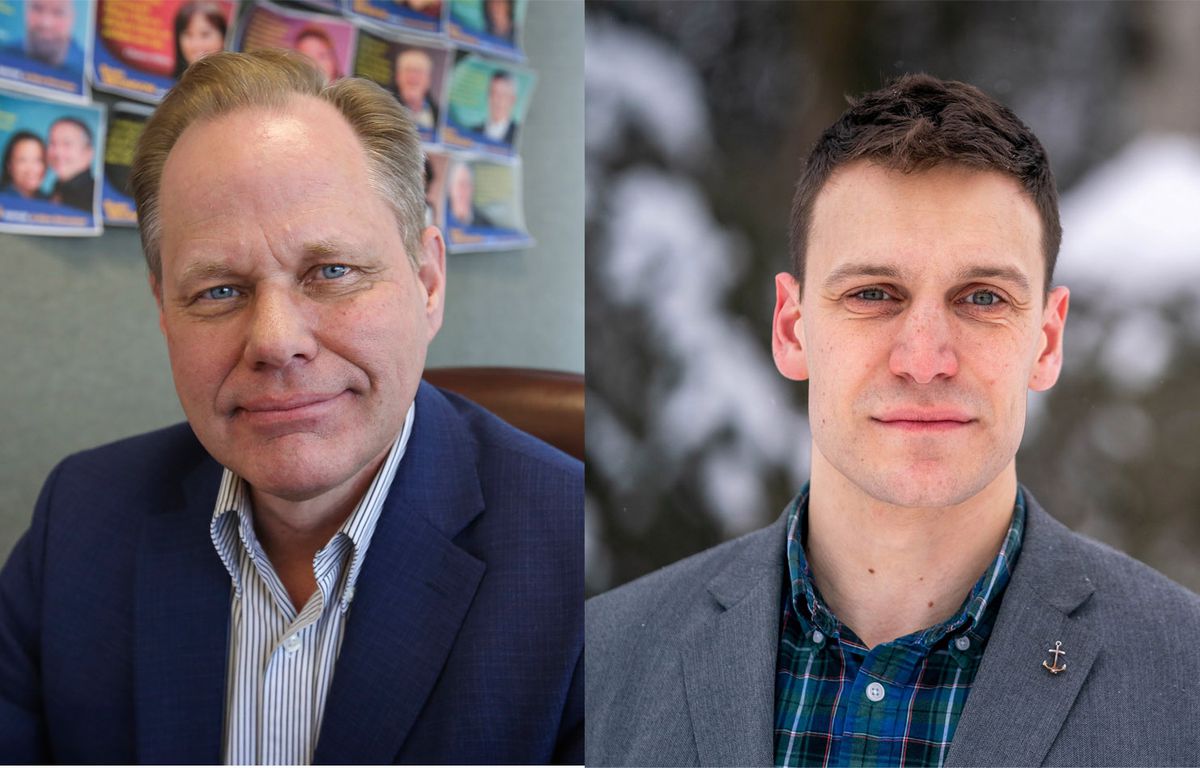 David Bronson and Forrest Dunbar both won nearly a third of the vote during the election on Apr. 6, and will now compete in a runoff election on May 11. Photo Courtesy Anchorage Daily News

The 2021 Anchorage mayoral election was held on Apr. 6, with 15 candidates on the ballot. Because no candidate won a vote share of at least 45%, a runoff election will be held between the two leading candidates on May 11. These candidates are David Bronson, who won 33.0% of the vote, with 21,807 votes, and Forrest Dunbar, who claimed 31.1% of the vote, with 20,566 votes. No other candidate managed to win more than 15% of the vote. The current acting mayor, Austin Quinn-Davidson, was eligible to run for election but did not.

Voters in Anchorage should receive mail-in ballots by Apr. 28. Voters who do not receive their ballots should call the election center at 907-243-VOTE. Ballots can be filled out and taken to the post office, where they will be counted as long as they are postmarked no later than election day, or at secure drop boxes around Anchorage until 8 pm on election day. One box is located on the UAA campus, at the Alaska Airlines Center.

Ballots should be carefully filled out to prevent errors, and the signature used will be checked against a reference signature taken most commonly from drivers’ licenses.

Bronson was born in Wisconsin but has lived in Alaska for nearly 30 years, and Dunbar is a life-long Alaskan. Bronson has a long history with the United States Air Force and worked as a commercial pilot. Dunbar is an attorney, a member of the Army National Guard, and currently represents Anchorage’s fifth district in seat H, a position he was elected to in 2016.

COVID-19 policy has played a large role in this race, with Bronson criticizing the shutdowns and mask mandates in several interviews. Bronson promises to end all mandates the day he enters office and has also stated his intention to stimulate local businesses with “all available state and federal funds,” in an interview with KTUU.

Dunbar has served on the Anchorage Assembly throughout the COVID-19 pandemic and voted in favor of extending municipal emergency orders.

In an interview with Anchorage Daily News, Dunbar said “we need fact-based leadership to beat COVID and get our economy back on track.”

Dunbar has stated that consistent masking will allow for economic recovery “before the virus is fully eradicated.” Dunbar has promised the continuation of current programs that waive or reduce municipal fees, as well as provide grants and rental relief to small businesses.

Bronson has claimed that homelessness is “one of the most pressing issues,” promising to combat it “aggressively and passionately” in an interview with Anchorage Daily News.

On the topic of homelessness, Dunbar has stated that his long-term solution is affordable housing. Dunbar explains that this must be coupled with supportive services. He points to revenue from the 2020 alcohol tax, revenue from which is dedicated to substance misuse treatment and prevention, and also includes funds for transitional housing. Dunbar hopes to take advantage of federal grants and private investments to improve the situation.

Both men have stated their desire to support and expand the Anchorage police department. Bronson promises to intensify police presence, as well as support community outreach programs, while Dunbar looks to maintain current levels of sworn officers, choosing instead to focus on hiring support staff, such as dispatchers, evidence clerks and technicians. Dunbar also supports investing in other supplemental programs like the Mental Health First Responders, a team of mental health professionals that can respond to applicable calls, which police officers are not adequately trained for.

Other topics include the economy and taxes, Dunbar has a ten-point plan available on his website that expresses a desire to spend federal aid to stimulate construction and revitalize downtown. Bronson promises to cut spending at the municipal government and to not implement sales tax.

Bronson’s stated desire is to “make it easier for businesses, both large and small, to operate successfully in Anchorage.”

The discussed topics of COVID-19 response, crime, homelessness and economy are the only positions available on Bronson’s campaign website. Dunbar’s campaign website includes positions on several other issues, such as a response to climate change and sustainability: improving public transportation and supporting the expansion of renewable sources of energy to reduce emissions.

Dunbar’s website expresses a desire to support education particularly at the Pre-K and higher education levels, noting that he wants to “build bridges between the Municipality and both UAA and APU.”

Neither candidate is running as a member of a political party. However, Bronson is endorsed by Republican Kenai Peninsula Borough Mayor Charlie Pearce, and Forrest Dunbar is endorsed by the Anchorage Democrats.