A botanical garden on my campus? UAA’s tree tour boasts over 80 unique specimens 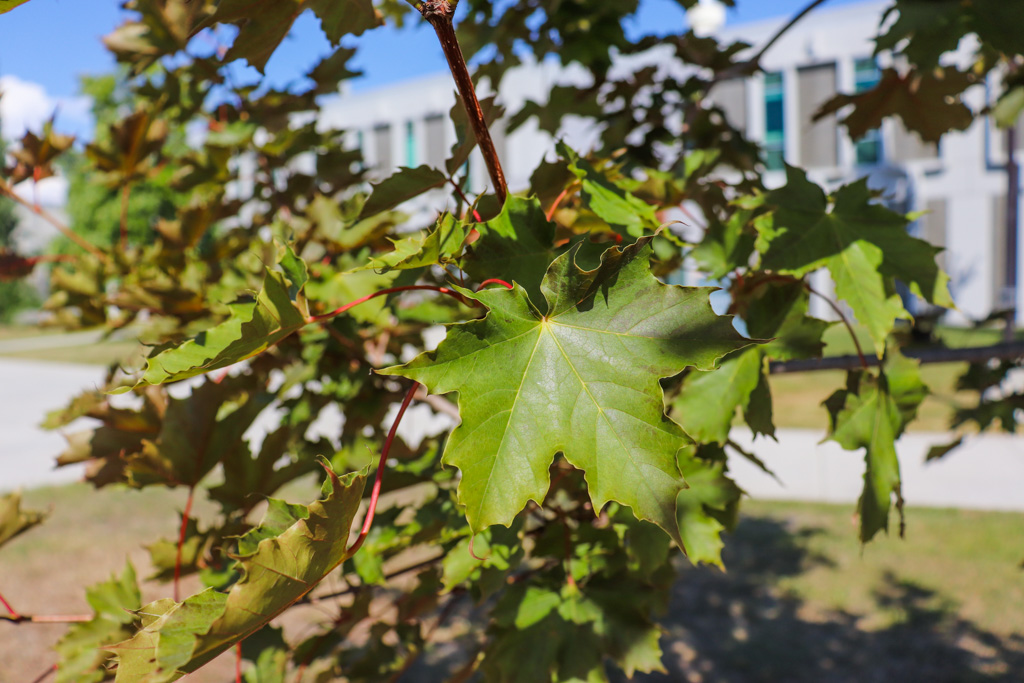 Close up of leaves of Norway maple west of Beatrice McDonald Hall. Photo by Matthew Schmitz.

If you’ve spent time outside on campus, you might have noticed white tags attached to some trees with a number on one side and a QR Code on the other. If you happen to scan one, it will bring up a guide to UAA’s tree tour.

The Chris Turletes Memorial Tree Tour, named after the late associate vice chancellor for facilities and campus services, has over 100 trees to see. Eighty-four of these are unique specimens.

According to the tree tour’s webpage, nowhere in Alaska has more tree varieties on public lands than UAA.

With a few species not normally seen in Alaska, like maples and oaks, the tour is a great excuse to walk UAA during the summer, one of the most beautiful times on campus.

Many of the trees were planted decades ago so the tour is also an opportunity to see the size, shape and features of a mature specimen for anyone looking to plant decorative trees. And side-by-side comparisons can help make clear the differences between trees that commonly get grouped together like fir, spruce and pine.

The trees and tour are maintained by the UAA grounds and landscaping department. In an interview, the department’s supervisor, Kara Monroe, said that walking the entire tour takes one to two hours, depending on how long you stay at each stop.

She recommends walking the tour in the spring, around May, when the trees are flowering, and in the fall, around September and October, when the leaves are changing and the fruit-bearing trees are putting out fruit.

In a follow-up email, she wrote that visitors can pick the fruit as long as it’s ripe. She asks for people to be careful not to break branches and leave some fruit behind for others and animals. The use of ladders is not allowed.

In the fall you can also pick leaves up from the ground to collect samples.

Monroe said the tour is set up to be self-guided though they offer guided tours to larger groups like the Anchorage school district and landscaping professionals.

The tree-list guide can be found on UAA’s website, and a campus map may be helpful for those not familiar with UAA.

The tour is broken into two parts: east and west.

The west part starts by the greenhouse to the east of the Gordon Hartlieb Hall and works its way clockwise around the Cuddy Quad following the buildings – Rasmuson Hall, the Allied Health Sciences Building, the Wendy Williams Auditorium, the Beatrice McDonald Hall, the Lucy Cuddy Hall, and the Auto Diesel Technology Building – and ends in the parking lot to the north of Gordon Hartlieb.

Anyone wanting a small sample of the tour should look to the west and south walls of Rasmuson Hall, which alone has 15 trees from the tour. Particularly striking is the bright-yellow variegated Norway maple on the south side of the building with unmistakable maple star-shaped leaves – think Canadian flag.

The tall Siberian larch to the north of the Allied Health Sciences Building is also an impressive specimen. The species shows up in two other locations on the tour as well: the northeast corner of the Natural Science Building, and near the entrance to the Fine Arts Building. Its needles are remarkably soft.

Monroe said it is a deciduous conifer, which means it loses its needles in the fall, and every year they get contacted by people concerned that the larches are dying though they are perfectly okay.

On the west side of the Beatrice McDonald Hall are well-defined Swedish columnar aspens, shaped similar to the tall, narrow Italian Cypress trees often seen lining the roads in movies and tv shows set in ancient Rome.

Included on the tour, on the other side of Beatrice McDonald, is a piece of 60-million-year-old petrified wood on display in a circular concrete flower bed.

The tour also offers an opportunity to get a look at species native to Alaska like the quaking aspen on the east side of the Integrated Science Building or the massive female cottonwood – also called a balsam poplar – to the north of the Sally Monserud Hall.

It’s the female trees, Monroe said, that put out the prolific, wispy-white cotton each summer.

The origins of the tour date back to the 90s though some of the trees were planted in the 70s when UAA was then the Anchorage Community College. Monroe said that two women, Lori Able and Pat Leary, were responsible for putting the tour together.

It was both a way to monitor the trees, and share them with the community, she said.

The trees on the tour do not get any special treatment to help keep them alive.

“We put them in the ground and see how they do,” said Monroe.

Sometimes trees die and are removed from the tour while others get added. Monroe said that they try to keep the tree numbers consistent.

The tour’s namesake, Chris Turletes, was interested in conservation and played an important role in developing the tree tour. During his time at UAA, he advocated for UAA to enact a no-net tree loss policy to ensure that any trees removed during construction would be replaced.

He also was responsible for getting UAA its designation as a Higher Education Tree Campus through the Arbor Day Foundation. The designation shows that UAA has made a commitment to tree stewardship on its campus, and works to educate the community on tree conservation.

“We take pride in the fact we can qualify and participate,” Monroe said of the designation. She said it also allows the university to prioritize maintaining the tour.

Monroe had worked with Turletes and said that he continued to help with the tour even after retiring in 2017. Every year the university must apply for the Tree Campus designation, which requires setting up an advisory committee. Turletes would serve on the committee, filling a required position of a community member.

She said that he would zoom in to meetings even while receiving cancer treatment in Seattle. Turletes passed away in 2021.

Anyone interested in setting up a tour for a group can contact Monroe via email at kmonroe7@alaska.edu.