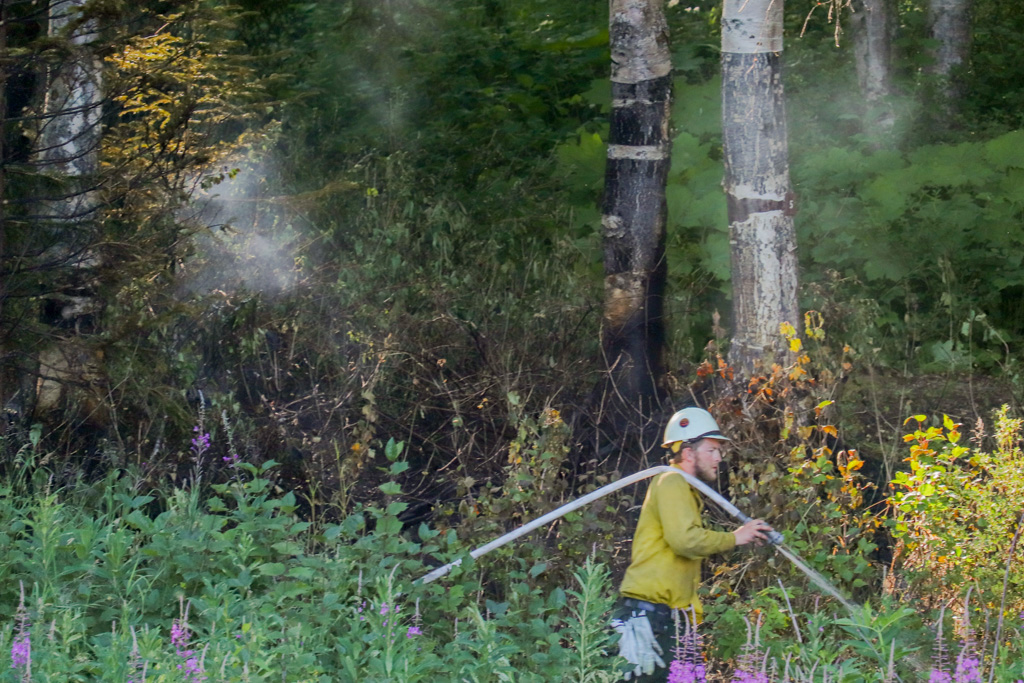 The fire was mostly put out by the water dumps from the helicopter but there were still plenty of smoldering hot spots left. Photo by Matthew Schmitz.

On July 1, a forest fire started at the north-end of Red Shirt Lake. It was located in a campground on the lake near the trailhead of a hiking trail that starts at the Rolly Twin Lakes parking lot.

Red Shirt Lake, which does not have road access, is in the Nancy Lake Recreation Area. Going north along the Parks Highway, the recreation area is about 25 miles outside of Wasilla.

A fire-response helicopter team based out of Palmer with the Alaska Division of Forestry – called a helitack –  received a call to respond to the fire from their dispatch at 3:24 p.m., said Jered Kemp, the incident commander at the scene of the Red Shirt fire.

He said they were airborne by 3:30 p.m. and arrived on scene around 3:50 p.m. Initially, they surveyed the fire, reporting details back to their dispatch, before landing to attach a bucket to the helicopter to scoop water out of the lake.

The fire, which was one-quarter of an acre in size, was knocked down with water drops from the helicopter, said Kemp.

The fire was reduced to smoldering hot spots, and the helitack crew worked on the ground to contain it by extinguishing any embers along the perimeter. Using water hoses, they were spraying down the area and using axes and breaking up logs and stumps to find any hidden hot areas.

Kemp said Darrell Koontz, a cabin owner on the lake, had shown up with water pumps and hoses, and helped to assist with containing the fire.

A 10-person hotshot crew with Pioneer Hotshots was called in to help mop up the fire 100%. Hotshot crews are firefighters who respond specifically to wildfires.

They arrived at the campground via the hiking trail around 6:45 p.m. and worked through the evening to cut in around the edges and put out all remaining hot spots.

A boy, who was staying in a public use cabin on an island across from the campground, said his mom had called in the fire.

The fire appeared to have come from one of the metal fire rings in the campground, said Kemp. He also said that there was no one on scene when they arrived, and they did not know who had started it.