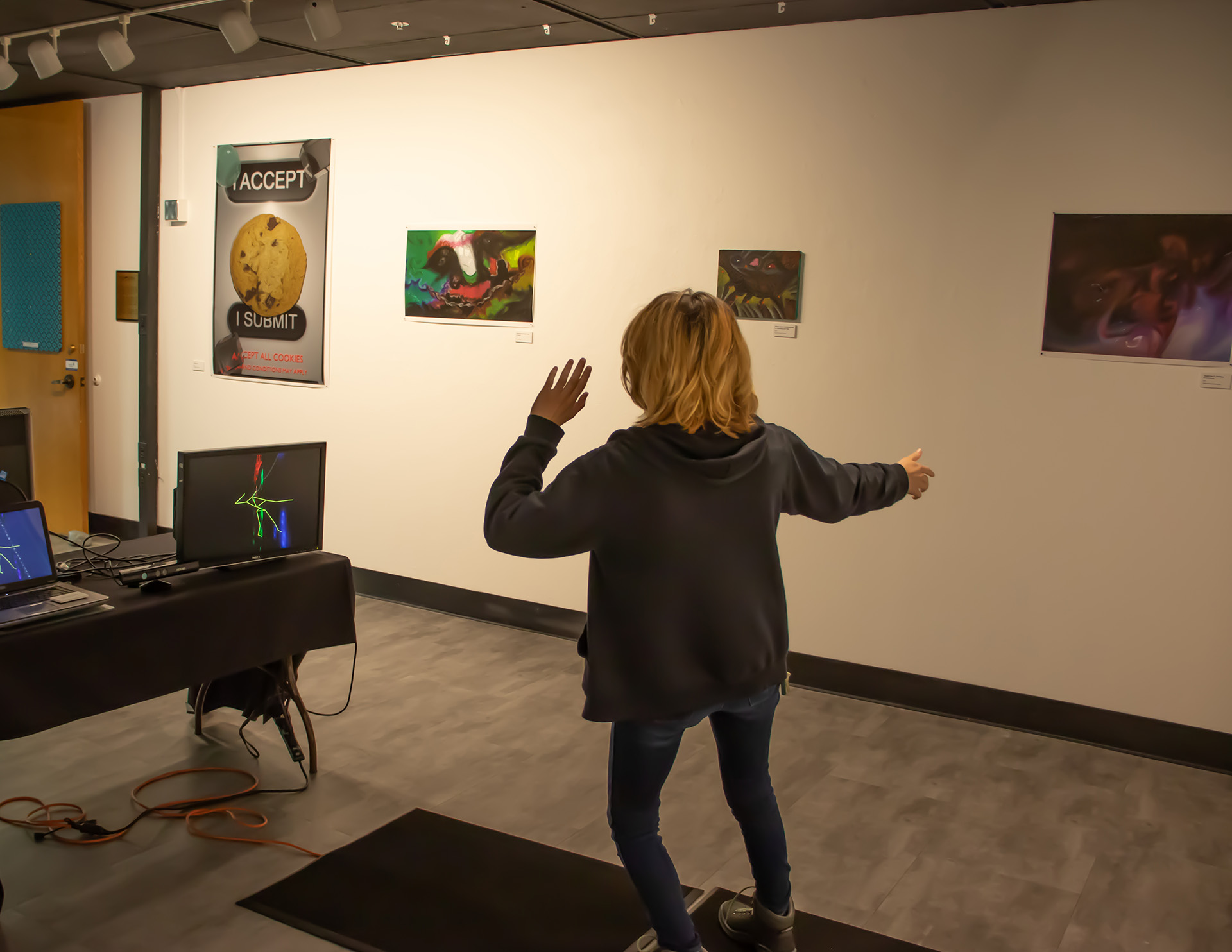 Xbox's Kinect is used by artist Pat Borjon to create interactive pieces of the C exhibit. Photo by Matthew Schmitz

In the modern world, surrendering privacy is the price of admission to surf the web and take advantage of free apps and programs.

Every search, every click, everything you look at online gets tracked.

That data is used to serve you content and get you coming back for more. Then it’s sold off to the highest bidder – who hopefully uses it for nothing more nefarious than selling you a pair of new shoes. It’s easy to imagine how this situation could spiral into something worse than the world described by George Orwell in his book “1984”.

Bringing this dystopian vision to life is UAA’s Pat Borjon, with his exhibit called “C” in the Hugh McPeck Gallery, running from June 16 to July 14. Borjon used his unique combination of artistic and programming skills to show us a reality that he says is largely already here.

The exhibit – which Nicole Pendleton, gallery manager of Hugh McPeck, said seemed to have a technological horror theme – tries to raise our awareness of this uncharted world using motion sensors, tv monitors, and paintings, many of which depict nebulous beings, whose lack – or excess – of focus hint at something mechanical and soulless.

From Borjon’s artist statement regarding the name of the exhibit: “C refers to the way we are seen by A.I., the way we think about being seen, and the way corporations see us through tracking technology like cookies, cameras and geo-coordinates.”

Borjon works in UAA’s Office of Admissions as the CRM Systems Administrator. He recently moved into the position, previously helping with IT support in the department for the past 17 years.

In an interview, Borjon said growing up he had an interest in art, taking classes at what was then called the King Career Center. He ended up studying electronic engineering and went to work for HP right out of college.

Working in IT, he’s had opportunities to exercise both his interests by designing the front-end graphical user interface of programs he was helping to code.

He said the exhibit in Hugh McPeck is his first. He had wanted to set something up in the gallery before, but he thought it was only for students. He discovered that you don’t necessarily need to be a student to put on a show, and after submitting a proposal, he was approved.

One anxiety-inducing work consists of actual microphones hanging by their frayed wires – with printed words that say, “WHAT’S LEFT OF YOUR PRIVACY IS HANGING BY A,” attached with paperclips.

The most striking pieces are the flat screen monitors hooked up to Xbox Kinects.

Borjon said he found early models of Kinects at thrift stores for low prices. The motion sensors contain all the software and hardware to track human figures. The data produced by them can be used as an input into any program designed to take advantage of the information, not just an Xbox.

Teaching himself how to access and use the Kinect data, Borjon created computer programs to demonstrate what can be done with the motion sensors. He said two of the tools he uses to create his applications are Processing and Touchdesigner.

One of the TV monitors displays a physics simulator that lets you position a stream of falling particles by moving one hand and position a ramp to redirect the flow with your other.In another, a stick figure is generated on the screen that follows the position of your own body.

There was one piece that showed a live video produced by the Kinect. Users could adjust the size and depth of the pixels to create what looked like a 3D topographical map – turning a flat image into a three-dimensional one.

Pendleton said this piece was the one she found most captivating. She also said that this was the first time that the Hugh McPeck gallery had ever hosted an exhibit with interactive works using motion sensors and monitors.

The other pieces in his exhibit were more along the lines of typical two-dimensional works of art.

There were a few digital paintings that had what appeared to be faces formed out of swilling vapors.

One of them, called “You Are Not Alone, Wink Wink,” shows multiple eyes peering out from a black abyss. There are the names of past U.S. presidents scrawled out, with Google coming at the end of the list.

Speaking on the piece, Borjon said that when it comes to who is surveilling us, it’s not just the government we need to be worried about, and all this information is just as likely to be in the hands of a giant corporation.

He said he uses a program called Verve to make these paintings. He said the program lets you adjust the fluidity of the paints you are using, and this lets you flick and swirl the paint around.

He said that he works in an iterative process, where he makes strokes until he starts to see something, such as a face.

He then makes another stroke. If it contributes to the forming image, he keeps it. Otherwise, he will press undo and try again – over and over – until he gets something he likes.

Another of his digital paintings, “See No Evil, Raise a Child,” uses a popular painting program called Blender.

The image is a spin on the classic three-monkey piece of “Hear no evil, see no evil, speak no evil.”

In this case, there are chrome monkey heads with the traditional words – hear, speak and see – written above their heads. Under them reads, “KNOW EVIL,” followed by “Raise a Child.”

This piece gets at one of the important influences on his work: raising his daughters.

He talked about the contradictory struggle of wanting to shield and protect them from the dangers of the world, and the reality that they would need to experience some of its evils if they were ever going to grow up and take care of themselves.

The oil painting of a blurred face called “La La La, I Can Not Hear You” is also related to this dynamic. It’s based on his own daughter’s face when she shook her head, not wanting to listen to his warning about some danger.

There are a pair of posters in the exhibit that facetiously offer the “opportunity” to win 540 cookies – online trackers that companies use to watch your browsing and identify you.

Borjon said the inspiration for the posters came from an experiment he ran to see how many cookies he could get by visiting 6 popular websites in just 20 seconds. During that time he found that the websites had installed 540 cookies on his browser.

Borjon said he has enjoyed the experience of setting up the gallery.

One piece that he was hesitant to put up was an oil painting called “The Getter Becomes the Giver.” He was told by someone that good artwork should make some people angry, not everything should make people feel good.

The work depicts a face screaming at another and is meant to convey the cycle of someone who is abused, themselves becoming an abuser.

It moved someone to share their own story of abuse with him.

He said that he would have never had that opportunity to hear their story without his work and that this has been one of the most impactful aspects of the exhibit to him, the conversations he’s been able to have, prompted by his art.