While you were gone 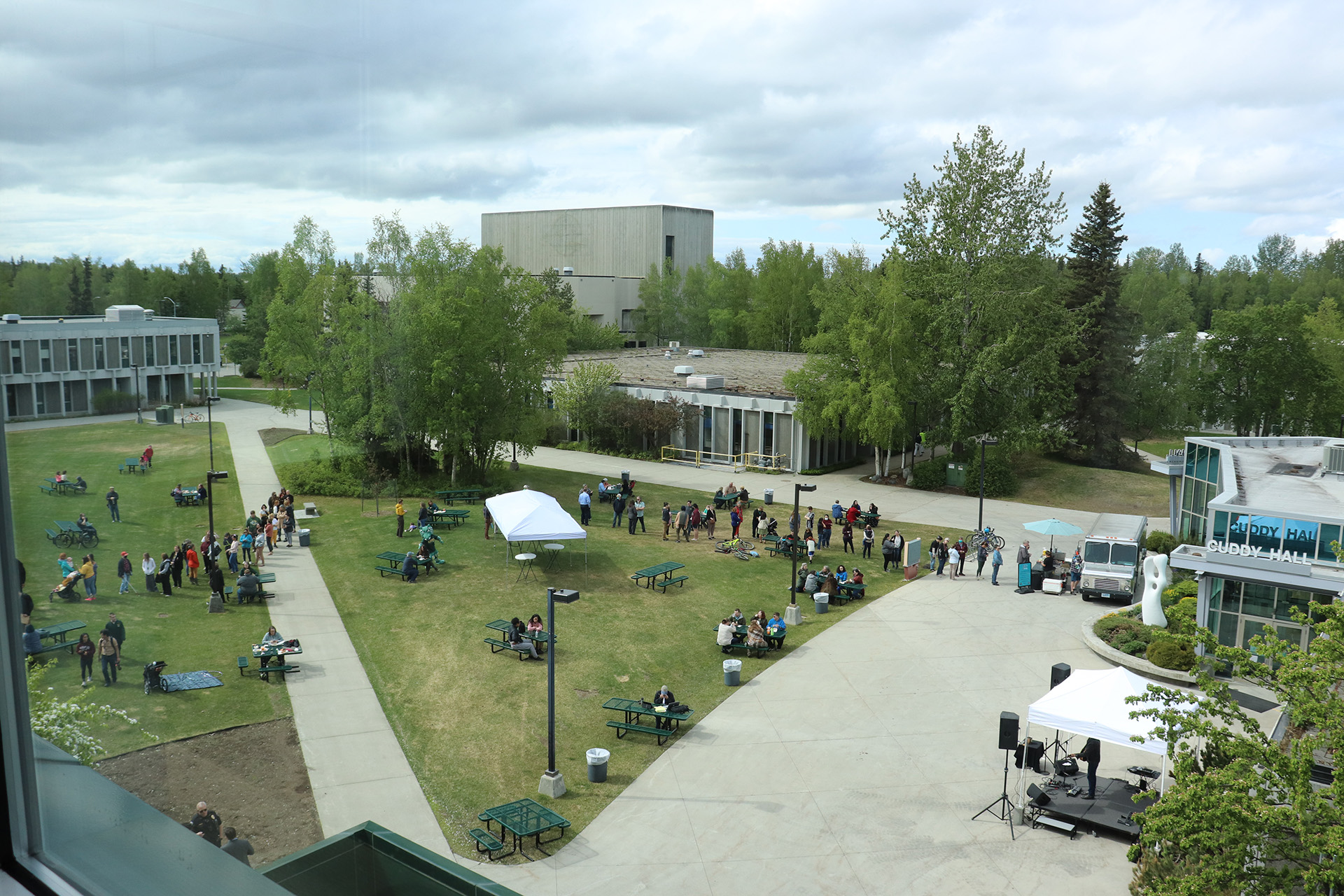 It’s been a busy summer here at UAA. Here’s a breakdown of some of the big developments that happened over the break. The Northern Light covered many of these stories, and more in-depth coverage can be found on our website, www.thenorthernlight.org.

There were two major construction projects this summer that will catch people’s eye. The 50th anniversary flower bed on Seawolf Drive in front of Rasmuson Hall received a redesign. The wooden bed was replaced with concrete forms. Also, inside Rasmuson Hall, a stock-ticker-tape marquee was installed that wraps around the opening in the ceiling of the first floor.

The Women’s Gymnastics team was able to achieve reinstatement after two years of fundraising. To hit their nearly $1 million goal the team hosted pledge drives, reached out on social media and engaged with university leadership by calling into town halls and showing up at public meetings. In addition to all that, they were also able to achieve the second-best GPA in the nation for a women’s gymnastics team!

Perhaps one of the biggest events of the summer was former President Donald Trump’s political rally at the Alaska Airlines Center to support Sarah Palin and Kelly Tshibaka. Thousands gathered from around the state to see the president and the event drew criticism from members of the UAA community.

Since the pandemic began, the University of Alaska Board of Regents held their first in person meeting on June 2-3 at the Gorsuch Commons. The big news coming out of the meeting was the board’s acceptance of the budget passed by the state legislature, which included specific funding for research related to the state’s economic development, such as mariculture, drones and heavy oil recovery.

Members of the full-time faculty union, United Academics, also showed up at the meeting to demonstrate and show support for the union.

The Alaska state legislature passed, and the governor signed into law, protection of the higher education investment fund. The long-term stability of the Alaska Performance Scholarship, Alaska Education Grant and WWAMI – all provided for by the HEIF – were thrown into question after a rule change caused the fund to be drained of its money. The legislation also recapitalized the fund with over $300 million.

Pat Borjon, CRM system administrator with UAA’s admissions, put on a novel art exhibit called “C” in the Hugh McPeck Gallery from June 16 to July 14. His artwork consisted of 2-dimensional paintings and interactive digital displays that used motion sensors to track body movement. He was able to combine art and technology to tackle tough themes such as digital surveillance, living with AI, commercialism and raising children in such a world.

After putting their operations on hold because of the pandemic, The Planetarium and Visualization Theater started shows in the theater again this summer. Located in the ConocoPhillips Integrated Science Building, UAA’s planetarium is the largest in the state of Alaska.

Students and other members of the UAA community had the opportunity to enjoy live music and lunch from food trucks at this year’s UAA Concert in the Quad series.

After 30 years of service at UAA, Vice Chancellor of Student Affairs Bruce Shultz retired. Originally from Wisconsin, Schultz earned a Master of Education from Ball State and came up to Alaska in the early 90s to work as an intern at UAA. Sensing an opportunity to help build something from the ground up, he stayed on at UAA and worked his way up through the university. He briefly served as interim Chancellor of the UAA before UA President Pat Pitney named Sean Parnell to the position.

Stepping in to fill the role of Vice Chancellor of Student Affairs is Deanne Woodard. According to her biography on UA’s website, she has over 15 years of experience in higher education. Previously she has served at Kansas State University and Mesa Community College. She has been working at UAA since May of 2021 as associate vice provost, overseeing programs such as the Learning Commons, Summer Bridge and TRIO.

UAA alumnus Ryan Buchholdt was appointed to the vice chancellor of administrative services, according to an announcement in the Green and Gold. Buchholdt has worked in various administrative positions with the university over the past ten years. In an interview with Chancellor Parnell, Butchholdt said, “my vision for the division is for us to be synonymous with student success.”

Ryan Smartwood was named athletic director, and Ryan Orton was made the associate head coach of Men’s Basketball.