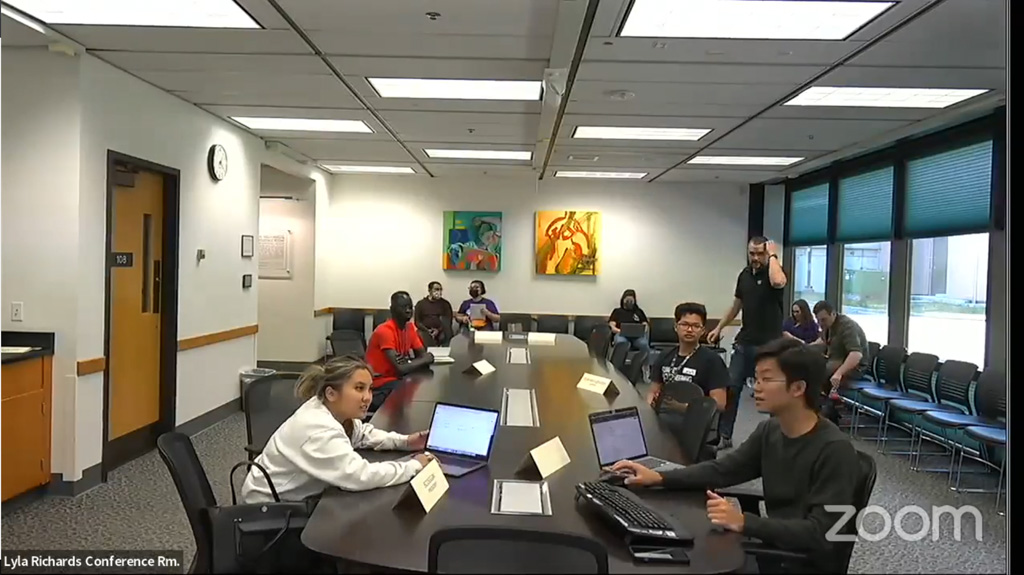 USUAA meetings are held in the Lyla Richards conference room, livestreamed to Facebook via Zoom.

UAA’s student government body, USUAA, held a meeting on June 22 in the Lyla Richards conference room in the Student Union.

The meeting was livestreamed on Facebook and is available for viewing.

Giving a report on the LGBTQIA2S+ Advisory Committee were Kim Morton, executive director of student engagement and inclusion, and Sara Caldwell-Kahn with multicultural students services.

Morton said the committee was behind the “Is it okay to say queer?” signs around campus. Morton said the goal of the signage was to educate people and help them get comfortable using the broader term “queer” to identify the entire LGBTQ community.

Caldwell-Kahn talked about pronoun buttons that will be made available to members of the UAA community at campus kickoff. The buttons spell out several common pronouns that people use, and there is a blank button that people can write their own pronouns on too.

Morton also said that the committee was working on a proposal for making all-gender restrooms more accessible on campus. There are currently a number of all-gender restrooms on campus, but they are often out of the way and getting permission, or a key to use them can be stressful. A map of the current restrooms can be found on UAA’s website.

USUAA advisor Zac Clark, who was present at the meeting, said that USUAA took action to support all-gender bathrooms in 2019.

Clark also gave an update on some activities and changes on campus. He said that the 50th Anniversary Garden got new concrete flower beds poured and looked beautiful.

The Sunshine and Sandwich Walk – an event hosted on June 15 by UAA to support Pride – had about 40-50 people and was informative, he said.

Also, he said that UAA had a table Downtown at Citywide’s Juneteenth celebration, and they received many questions from people about coming back to UAA.

Regarding USUAA business, Tejada said that they had attended the Sunshine and Sandwich Walk. Also, Tejada said they were looking at improving student belonging, engagement and participation.

Scoggin said they were trying to more effectively use their diversity engagement and inclusion fund, and the next dates for USUAA to clean up their Adopt-a-Road section of 36th Avenue would be on June 29 and July 27.