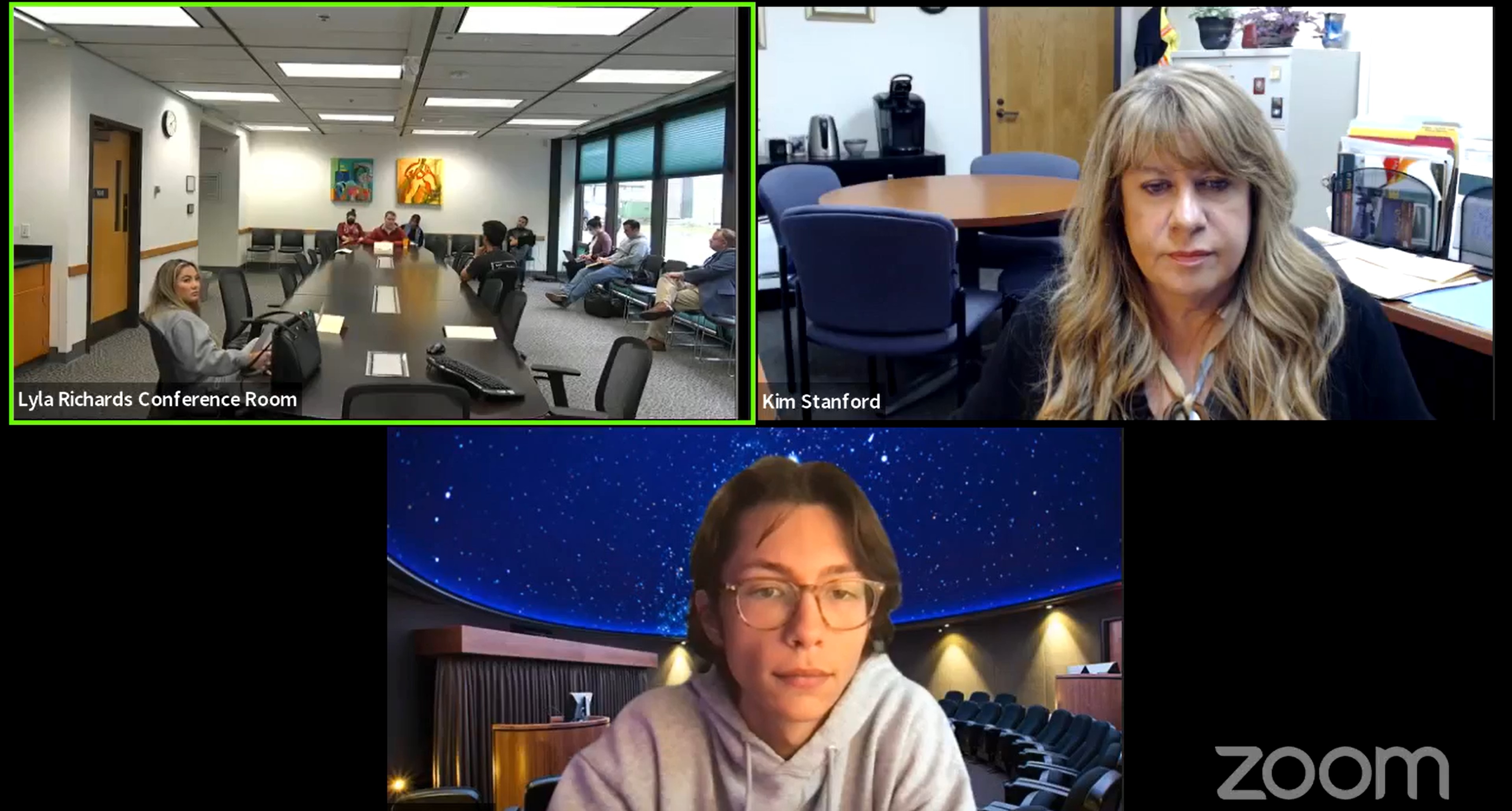 USUAA held a meeting on July 20 in the Lyla Richards conference room in the Student Union. President Katie Scoggin and Liaison Brian Cuevas Fuentes were the only members present in person.

Delegate Matt Green, who was zooming in, ran the meeting.

Giving an update on the return of shuttle services in the fall were Executive Director of Campus Services David Weaver and Director of General Support Services Kim Stanford.

Weaver said that they were making good progress in getting the service ready for Fall of 2022.

Standford said that they had two small passenger vehicles on order – fitting 11 people, or 9 and a wheelchair – and that they should be here sometime in August.

She said the tentative route would make a loop from the Gorsuch Commons to the Engineering and Industrial building – or Student Union – onto the Consortium Library, Fine Arts Building, Administrative Building, and back to the commons.

Part of their purpose at the meeting, they said, was to get some feedback on the route stops – such as if it would be better to stop at the EIB or Student Union – and discuss the schedule of the route. They wanted to know if it would be better to have the shuttles driving continuously or attempt to be at certain stops at certain times, meaning they would have to wait at a location if they were getting ahead of schedule.

Weaver said that in a survey conducted in January 2020, a large number of students reported that the shuttle was important to their academic success. He also thanked USUAA for passing a resolution in the spring recommending the reinstatement of the shuttle program, saying that it was helpful in securing funds for the new program.

Also discussed at the meeting were some upcoming events for the end of July: UAA at the Movies offering discounted tickets to “Nope” on July 22, USUAA Adopt-a-Road clean up on July 27, and Multicultural Services and Student Activities hosting Mochi and Musubi Mingle on July 28.

Also, Scoggin said that USUAA had a meeting with the new Seawolf head coach, Matt Shasby, and the Seawolf Hockey Alliance.

Scoggin said that Shasby wants to see the team more active on campus and engaging with student organizations and that he was looking for feedback from USUAA on how to get students more engaged with Seawolves’ hockey.

Also discussed at the meeting was what, if any, response should come from USUAA to the recent political rally held at the Alaska Airlines Center on July 9 by former President Donald Trump’s Save America political action committee.

Scoggin said that they had heard from students upset that the event was taking place. Recognizing that it would be unfair to take action against one party, the assembly discussed a blanket wide ban on all political activity on campus.

The pros and cons of such a move were considered, with the opportunity to educate students about the political process and possibility that such an event could encourage other political groups to use campus services being listed among the pros.

The difficulty of how exactly to thread the needle on this polarizing topic was not lost on the assembly.

Also brought up was the importance of making clear that UAA is not hosting such events and that concern for the impacts to students and residents should be central to any legislation produced.

Scoggin, who is a resident on campus, shared her own experience of the rally, saying there was loud music that started early in the morning and a lot of traffic.

Fuentes, also a resident, said that it was very crowded that day and the rally consisted mostly of people they didn’t know.