UAA students advocate for scholarship fund and university in Juneau 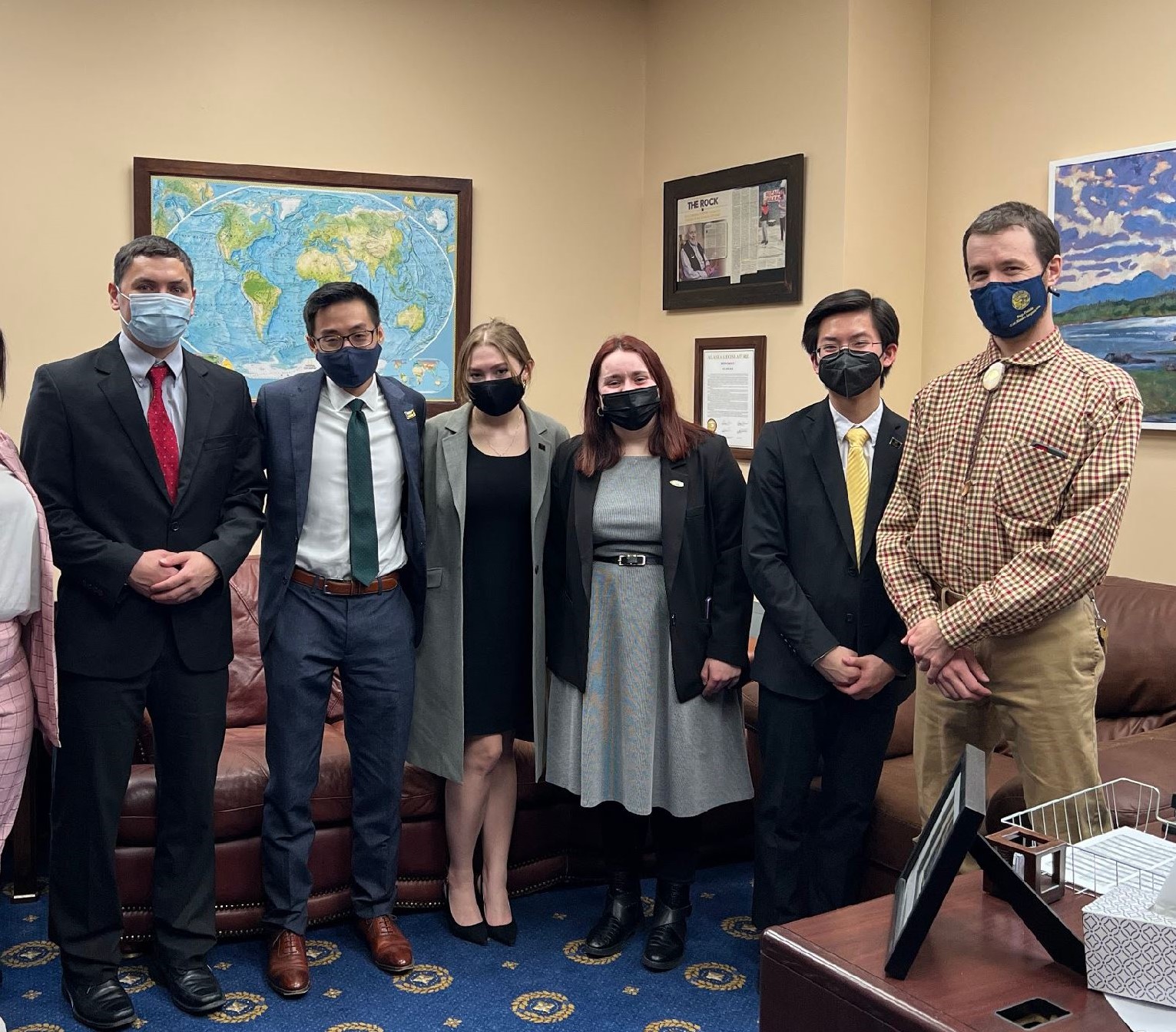 Over the course of four days, assembly members from the Union of Students of UAA spoke with Alaska state senators and representatives in Juneau to advocate for the University of Alaska. They were part of a larger delegation of students from all over the UA system.

The Alaska state legislature started their first regular session on Jan 19 and students were in Juneau Feb 12-15. UA Statewide organized the trip and around 15 students participated.

USUAA President Tuan Graziano was one of three UAA students that went to Juneau. He was accompanied by USUAA senator Shanone Tejada and senator Ella Bryner.

Graziano, an Economics major, sat for an interview regarding his experience of the trip.

Normally an annual event, this visit marked the first time students were back in Juneau in several years. The global pandemic had limited access to the legislature and Graziano was happy to have the chance to speak with Alaska legislative members face to face.

The visit was his first time to Juneau. Two main items on their agenda were voicing support for $20 million of additional funds to upgrade the UA IT system and House Bill 229, written to secure the Higher Education Investment Fund of Alaska from being swept into the state coffers.

Alaska Governor Mike Dunleavy added the IT funding to the UA budget proposal this year. According to Graziano, the system has not been upgraded for decades. He described our current IT system as “a 1995 cell to a modern smartphone.”

Investing in the system would be, in his words, “showing commitment to students and community, long term.”

The HEIF provides for several scholarships. One is the Alaska Performance Scholarship. It awards high school graduates scholarships based on their graduating GPA. Students can receive funds for up to four years if they attend a qualifying post-secondary education institute in Alaska. 2,789 students received money in FY 2021.

Another scholarship is the Alaska Education Grant, a needs-based scholarship that paid out funds to 2,189 students in 2020.

Graziano expressed passion for the programs and frustration at their potential disruption. For high schoolers and graduates, the APS was like a promise: You work hard in high school, and you get to depend on this money for college.

He said to “make sure we have credibility” with the community, “part of that is making sure it’s stable for students.”

He also pointed out the broad range of students that receive money from these programs. They are not just “traditional” four-year degree-seeking undergrads, but also include students across other UA system programs, such as students getting occupational endorsement certificates in fields like welding and nondestructive testing.

It’s hard, he indicated, to get professionals to move to Alaska and stay.  The UA system is helping provide paths for Alaskans to careers, which the state needs. Cutting the program puts the existence of that future workforce at risk.

Graziano and his fellow delegates spent the first two days in Juneau preparing for the meetings, so they could answer questions and give arguments for the proposals to the legislative members. It involved researching the bills and practicing their advocacy strategies.

In addition to advocating for the IT budget increase and HB 229, part of their mission was to share their personal stories as students of UAA.

The two days of speaking with legislative members involved a flurry of back-to-back meetings. UA Statewide set up the meetings beforehand. They try to match students up with the representatives and senators from the student’s district. For example, students who live in Eagle River met with senator Lora Rienbold and representative Ken McCarty.

Among the legislators Graziano had meetings with were representative DeLena Johnson and senator Elvi Gray-Jackson.

Regarding how the trip went, he described it as, “very productive, successful.”

The bill to protect the HEIF, HB 229, he believed, would likely get the support it needs to pass.

One thing Graziano learned from the trip was that, as he put it, “people want to listen to student leaders.” In addition to this was the insight he got speaking with staffers and legislators of the importance of sending emails, letters and making phone calls.

“Staffers are putting stuff on legislator’s radar,” he said. The way they determine what to bring up largely depends on the feedback they are getting.

Graziano would like to see more opportunities for advocacy because, he said, “to create deeper connections requires meeting throughout the year.”

This could involve calling in on public testimony, sending emails and visits to legislators’ offices here in Anchorage. To be effective, it would take more people too, including students and faculty.

In a follow-up email, Graziano wrote, “I think the most interesting part which also happened to be the most fun part of going to Juneau was connecting with other students leaders.”