Candidates invited, Bill Walker and Les Gara mingled with students, staff and constituents over hors d'oeuvres and a discussion over their visions of Alaska 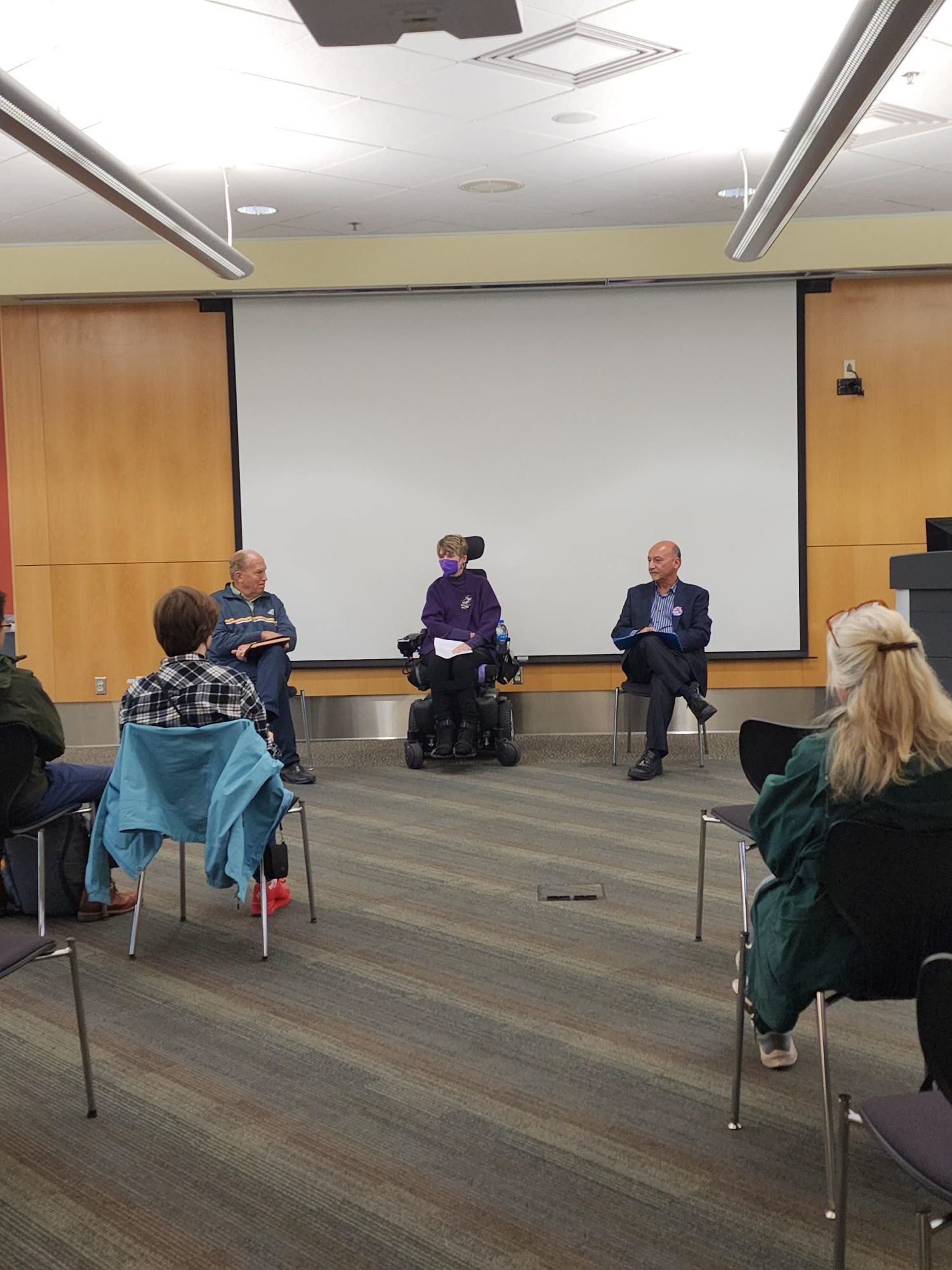 About 40 guests attended UAA’s Gubernatorial Forum on Sept. 20 in the Consortium Library. Former Gov. Bill Walker and former State Representative Les Gara participated in the discussion as guests, which was moderated by Kimberly Pace, professor of political science and women studies. Gov. Mike Dunleavy had been invited and had chosen to not attend, having already limited his involvement with public engagements.

One attendee brought up the fact that Gov. Dunleavy was not there and said she was there to support the candidates who were willing to be accountable to the public. Pace explained that Dunleavy ignored several invitations and finally, when his campaign was called directly, had someone inform forum organizers that he was only attending certain events and that the university was not on his list. In 2018 he also did not participate in UAA’s forum.

Questions were initially presented from students and alumni, and afterwards Pace invited the audience to ask questions of the candidates. The forum was civil, and the conversation was intelligent. Everyone seemed to be paying attention.

Many of the questions naturally gravitated toward student issues, including which policies would they enact to retain students and about the low student jobs pay – students are paid only minimum wage or a dollar or two above minimum wage on campus. Gara’s mantra was focused on “a lack of money should not be a barrier to success.” Walker spoke of student loan forgiveness, how, in the earlier years, state student loans were forgiven based on a person staying in state. Both emphasized that the gutted university budget left very little money for students.

Both Walker and Gara are eloquent. With just about every question, one or both of them had a quotable moment.  When asked about vaccines, Gara stated, “I am not a scientist.” He said that unlike Gov. Dunleavy, he would have never quit talking about it. He made it clear that he would have taken covid seriously, but never forced vaccines.

On abortion, Gara said that he is the only 100% pro choice candidate, and that he went to pro-choice rallies all summer. Walker said that while he is a Christian and is against abortion, he “won’t get between a woman and her doctor” and his running mate on the unity ticket, Heidi Drygas, is pro-choice.

When asked how they would specifically support education in the state, Gara said that he has supported legislation in the past for pre-K and will again, and stated that school funding should increase along with inflation every year, not be cut. Walker said that this year, Alaska was 1,000 teachers short, that for the first time ever, there was not an education fair, and that he understands why teachers are leaving. He said, “This is hurting children the most.”

Addressing the help for families with children, Walker said, “Lower income folks, they don’t have two homes, they have two jobs.” He supported Denali Kid Care and expanded it, he promoted child care assistance. Regardless of their attitudes toward abortion, both candidates expressed a history of supporting legislation that helps families.

Denali Kid Care was also expanded under Walker and supported by Gara.

On climate change, Walker created a climate change action committee which was taken off Gov. Dunleavy’s website within an hour of taking office. His committee was addressing issues such as thawing permafrost and rising sea levels. On his agenda if he gets reelected is to get that going again and to get state and federal monies to help relocate villages, or improve structures.

Gara said that “the cleanest energy is the energy you don’t use.” He supports a renewable energy fund and cutting subsidies to oil companies. He said since not every community has the same renewable resources, he wants to put electrical transmission stations between communities.

In questions from the audience, a woman asked about crime occurring in villages, particularly to vulnerable women, and how this affected people trusting the government. Gara said that equal justice does not exist in the villages and that “all facets of government should look like the people they represent.” He said that “a backlog in rape kits is a backlog in unprocessed criminals”.

The Northern Light was recognized by Pace and asked if the candidates felt that wisdom was a needed element in leadership and if they were wise. Both candidates reminded the audience why they are statesmen. Gara said that to him wisdom was about curiosity: Did someone want to learn more? Did they want to see who benefited, and who was hurt by actions, and the long term effects of an action? Walker said that he felt he was wise because he hired people who didn’t always agree with him and who were not afraid to tell him if they thought he was wrong and that he followed up on their advice.

Afterwards, both candidates hung around to speak to attendees and chat. There was genuine warmth between them and the students, staff, and other attendees from the community.