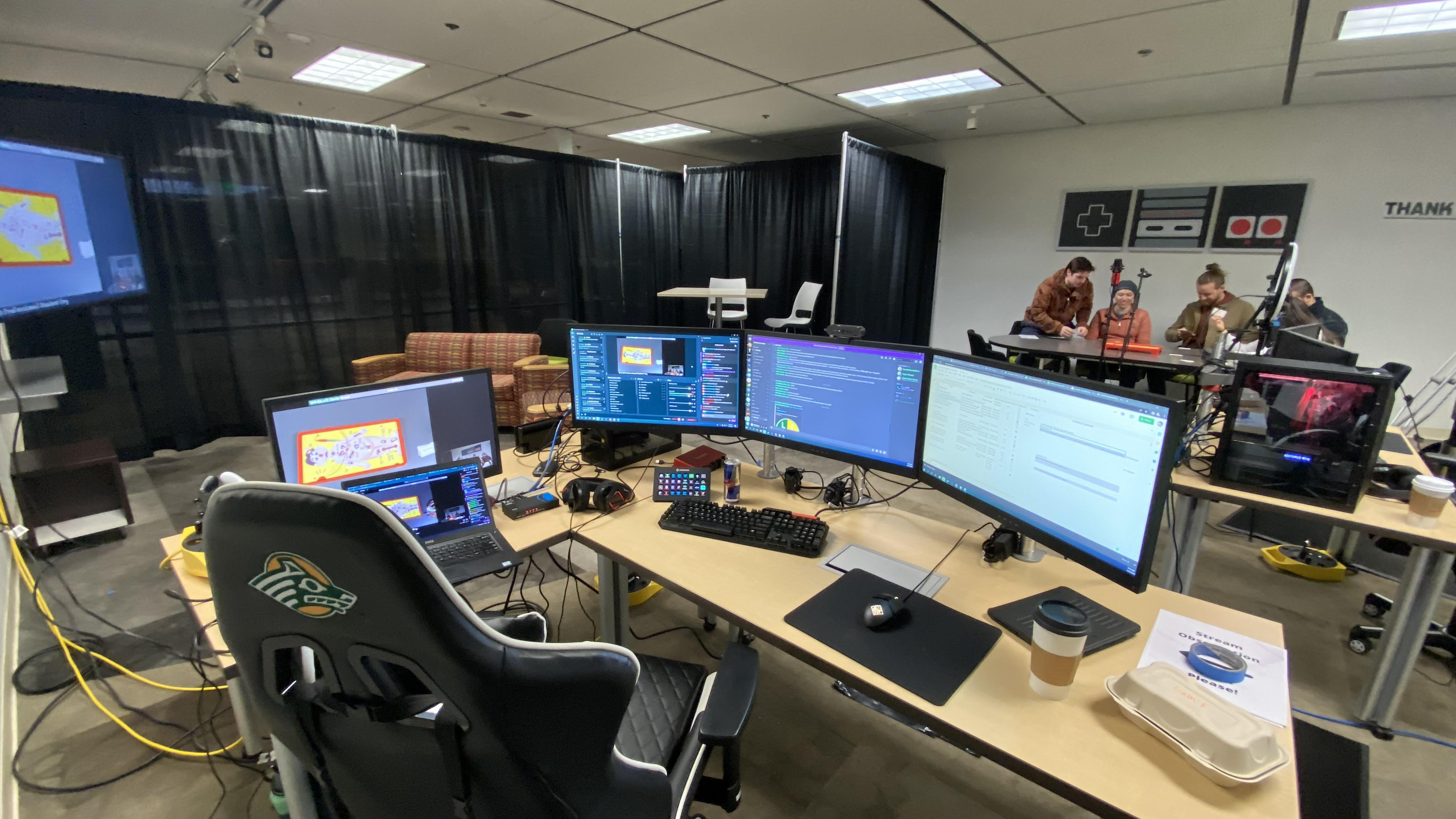 The Esports Lounge in the Student Union was transformed to broadcast the 24-hour charity livestream, photo courtesy Liam Floyd

[Disclosure: The Northern Light was involved in hosting an hour slot of this event.]

On March 25, the UAA Esports Lounge hosted a 24-hour livestream for charity to raise money for the Children’s Lunchbox, a non-profit organization associated with Bean’s Café in Anchorage, Alaska. The UAA Esports Lounge, which manages the gaming lounge in the Student Union, invited over a dozen different UAA clubs and organizations to play games live on the stream and help raise money for the event.

The fundraising goal was $2,500, though by the end of the 24-hour period the Esports Lounge had reached $4,000, with some additional donations coming in after the event had ended.

Streaming live via Twitch from the gaming lounge in the Student Union, Student Life event coordinator Liam Floyd, along with Maddy Cherrier and assistant director of Student Union Cody Buechner, managed and directed the drive.

In an interview, Floyd talked about organizing the fundraiser. Last year, the Esports Lounge ran a similar event, eyeing the goal of raising $500, with total amount raised coming to around $1,100, according to Floyd. This year’s event saw greater participation from clubs and donors. Floyd attributed the engagement to a more robust marketing campaign.

Floyd said the magnitude of this year’s drive was one of the biggest challenges. They had to coordinate and direct 13 different organizations, set up computers, audio and video equipment, and come up with contingency plans in case things went sideways.

The gaming lounge was transformed into a mini-broadcast station, with a control center to coordinate audio and video feeds, two different places where clubs could set up to play games and a table for interviews.

Each organization was given a time slot to cover during the 24-hour period and most set up in the lounge to play their games in person. Some conducted the event remotely.

Some of the participating organization included The Health Professions Student Organization playing Operation, the Feminist Intersectional Rights Movement playing games on the Xbox, and the Cyber Security Club playing Hack King of the Hill.

Even The Northern Light was able to get in on the action, playing Jackbox Trivia Murder Party 2 at 2:30am.

Other programs were included to help fill time.

President of the Philosophy Club, Tunca Isik Askin, described his experience of the charity drive in an email writing: “For me, the experience was incredibly fun and relaxing. We did a podcast-like event with a small logic game, and we got into some pretty great topics.

“The majority of the discussion was on the philosophy of mind, with all of us having some important insights and distinctions between our positions. We also got into some ethical discussions, with a quick section on the Ukrainian Crisis. I would definitely do it again provided the opportunity!”

A writer and a marketing coordinator from Jackbox, invited by Cherrnier, made an appearance on the stream, joining to play Jackbox with the Psychology Club.

In addition to playing games, participants from the various clubs had the responsibility of encouraging and thanking donors. The FIRM was live on the stream when the initial goal of $2,500 was met.

President of the FIRM, Deidre Goins, said in a text message: “This was our first big event, so we were very excited. Most importantly, we got to help make a difference for local families. And we were able to help fund this great charity while having a blast discussing the continued need for intersectional feminism.”

The beneficiary of the raised funds, The Children’s Lunchbox, sends meals to needy families with children. According to their website, every $10 donated will provide an entire meal for a family of four.

By the end of the stream, at 6am, the club was near $4,000. Bruce Schultz came in in the last few minutes to make an additional donation that pushed the total to $4,000.

The amount raised is roughly equal to providing 400 families of four, or 1,600 individuals, a meal.

Though not an annual event, Floyd would like to see the 24-hour livestream for charity become a regular yearly fundraiser at UAA.