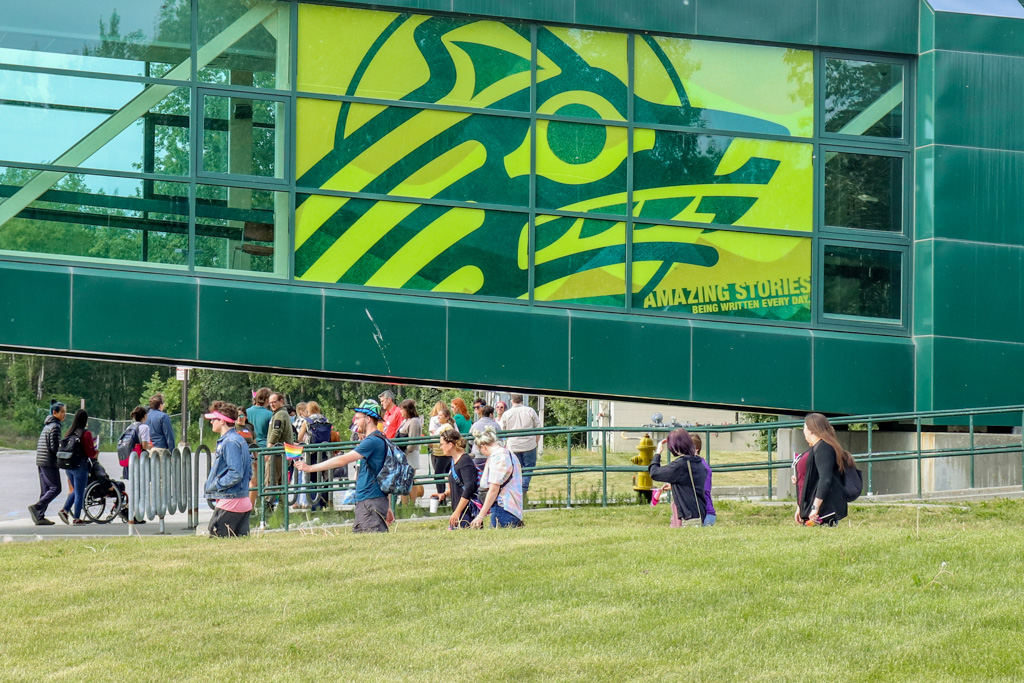 Walking and rolling around campus to celebrate Pride month, participants make their way toward the bike trail behind the Wells Fargo Sports Complex. Photo by Matthew Schmitz.

The Sunshine and Sandwiches walk was held on June 15 by UAA Student Activities. More than 30 people showed up to walk around campus and celebrate Pride month. UAA provided sandwiches and ice-cream sandwiches from Wild Scoops.

In addition to the walk, a goal was to also educate participants “about the history, people and celebrations of queerness,” according to an event description.

Carrying rainbow flags, the group was led by Student Activities Civic Engagement & Diversity Coordinator Cuckoo Gupta in a loop around the middle of campus. Starting by the entrance to Enrollment Services and the Student Union, they headed toward Rasmuson Hall.

The walkers – and at least one roller – took a right turn under the bridge that connects Rasmuson to the Wells Fargo Sports Complex. Taking another right, the group made their way on the bike trail that cuts through the woods behind the Student Union and crossed over Chester Creek. Following along UAA Drive and then Providence Drive, they made their way back to the Student Union Plaza.

There they got to enjoy the music of DJ K4-e-yuh and guitarist Pepper Kit. In addition to sandwiches, attendees were also able to get free purple shirts with a rainbow UAA Seawolf logo in the center.

In an email response to questions about the event, Gupta said that this is UAA’s second annual Sunshine and Sandwiches Walk. She wrote that she was the lead coordinator, and the event was partly funded by UAA Student Activities.

Other organizations that helped with the walk included The Family, who provided signage with facts on Pride and information about queer policy. Also, The Concert Board was responsible for funds related to the musicians at the event.

Fiscal Technician Sarah Holland, attending for the first time this year, said the event was “a complete success.”