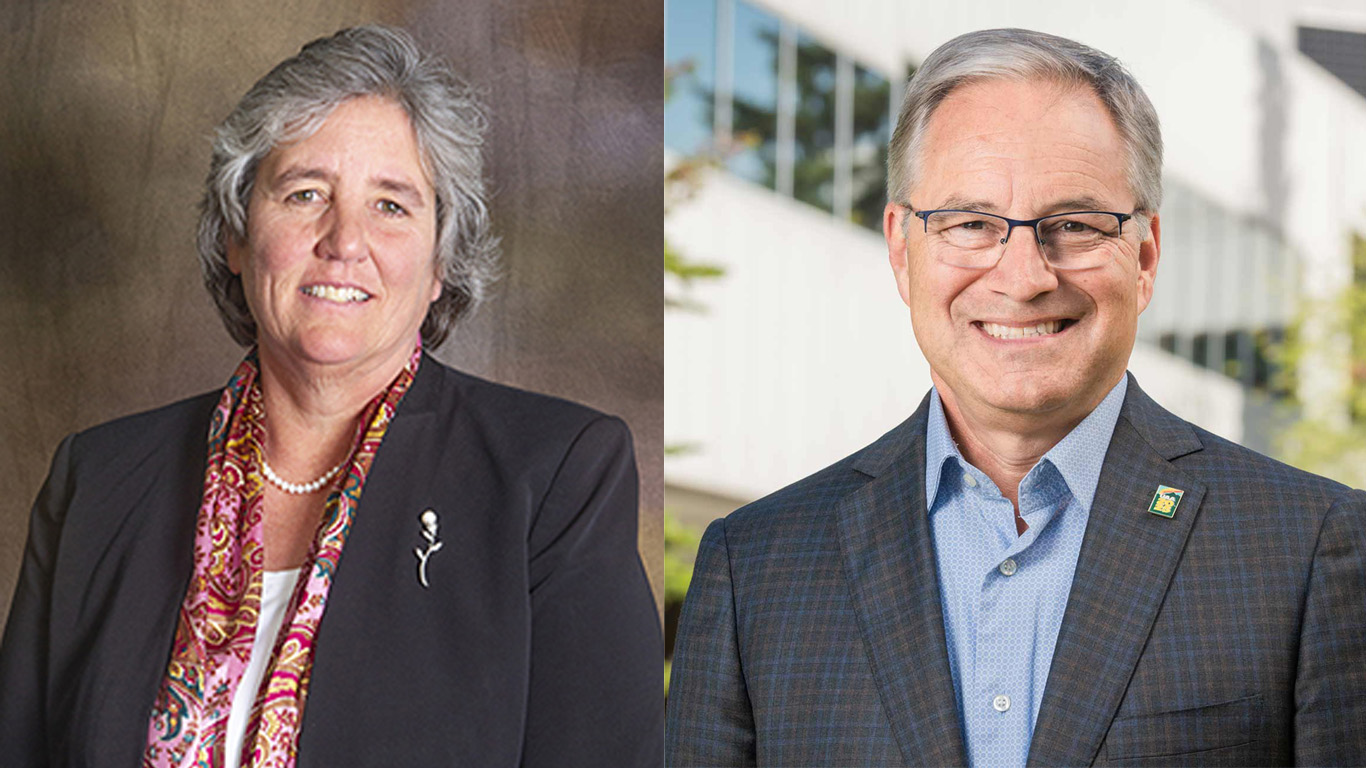 Some topics discussed were enrollment, student advising, athletics and tuition.

USUAA President Katie Scoggin, ran the meeting, asking most of the questions, along with Vice President Shanone Tejada.

Of the fifteen students who attended in-person, nine were members of the UAA women’s gymnastics team.

The first question raised by Scoggin was regarding wages for student employees, and if there will be any attempts to match higher wages offered by the private sector.

Parnell spoke about the difficulties in raising wages as student workers are paid, in part, by funds from the federal government. He mentioned hiring students as temporary employees as a possible workaround.

Schultz picked up the question and noted that pay for student employees is set to increase slightly.

Morton added to that, expanding on the benefits of student positions, such as flexibility with school schedules, unique work experience and leadership opportunities.

Scoggin went on to recognize and congratulate Pitney for being the first woman to become president of the UA system. Scoggin asked Pitney about her priorities and goals.

Student engagement was the first thing Pitney mentioned. She also talked about employers’ need for qualified employees and helping connect students with businesses.

Another goal she brought up was increasing enrollment and bringing more people into the university.

Scoggin asked Parnell about this last point, and he talked about the increase to the federal Pell Grant that will cover 12 credits of in-state tuition for students who file a FAFSA and qualify. He also spoke about bringing awareness to the opportunities on campus.

A gymnast asked for advice on increasing student engagement.

Parnell suggested setting up a presence at major school events like Campus Kickoff, or sports games, as a way students can increase the visibility of their organizations.

Scoggin brought up questions regarding efforts to protect UAA athletics, in part on behalf of the gymnasts present at the meeting.

Parnell talked about the importance of good leadership and praised the efforts of Interim Director of Athletics, Ryan Swartwood. Parnell expressed confidence the gymnastics team would meet its fundraising goals and be reinstated.

He also mentioned, coming out of the pandemic, an increase in public participation in sports and people enjoying the opportunity to gather.

He went on to say, “I see athletics as a gateway to this university, I see it as our open door to the public to come join us and come find opportunity here.”

Parnell spoke of his pride in UAA’s student-athletes and brought up the impact they make when people see their fundraising, good grades and other activities.

The gymnastics team has been especially active in representing UAA athletics, with Tejada praising them at one point saying: “I also just want to recognize how on top of things the gymnastic team is. At every public opportunity, there is always a Seawolf gymnast providing testimony to the board, and I think that’s phenomenal.”

Another topic brought up was the extremely icy conditions of walkways around campus. One of the gymnasts pointed to stitches she got after slipping on ice.

In addition to that, Pitney talked about trying to retain faculty and the importance of giving them a sense of stability and compensation that is also increasing.

Regarding what next year will look like, Parnell said that the online/in-person split will be around 40%/60%, respectively. That still represents a rise in online classes from the pre-pandemic levels which were around 20% online and 80% in-person.

Some efforts to get more students on campus include giving in-state tuition to out-of-state students who live in the dorms. A similar waiver was mentioned for students taking online classes out of state.

On tuition increases, Pitney had this to say: “As time goes on, tuition will grow,” adding, “we know it’s not going to happen in fiscal year 23, we don’t anticipate, at UAA, it will happen in fiscal year 24. But the tuition cannot be stayed at long term because the students and the state share the cost of education over time.”

A student living in the dorms asked about the return of shuttle services and Parnell said they would be coming back.

Tejada put forth a question on improvements to student advising and Runge spoke about an upcoming change to the advising process. The goal, as she explained it, will be to make advising more consistent across the various programs, taking what is successful in the current model and trying to make those practices ubiquitous.