The U.S. Supreme Court just became more conservative and women’s rights may be at stake

Judge Amy Coney Barrett has replaced the late Justice Ruth Bader Ginsburg in the Supreme Court, tilting the court in a conservative direction 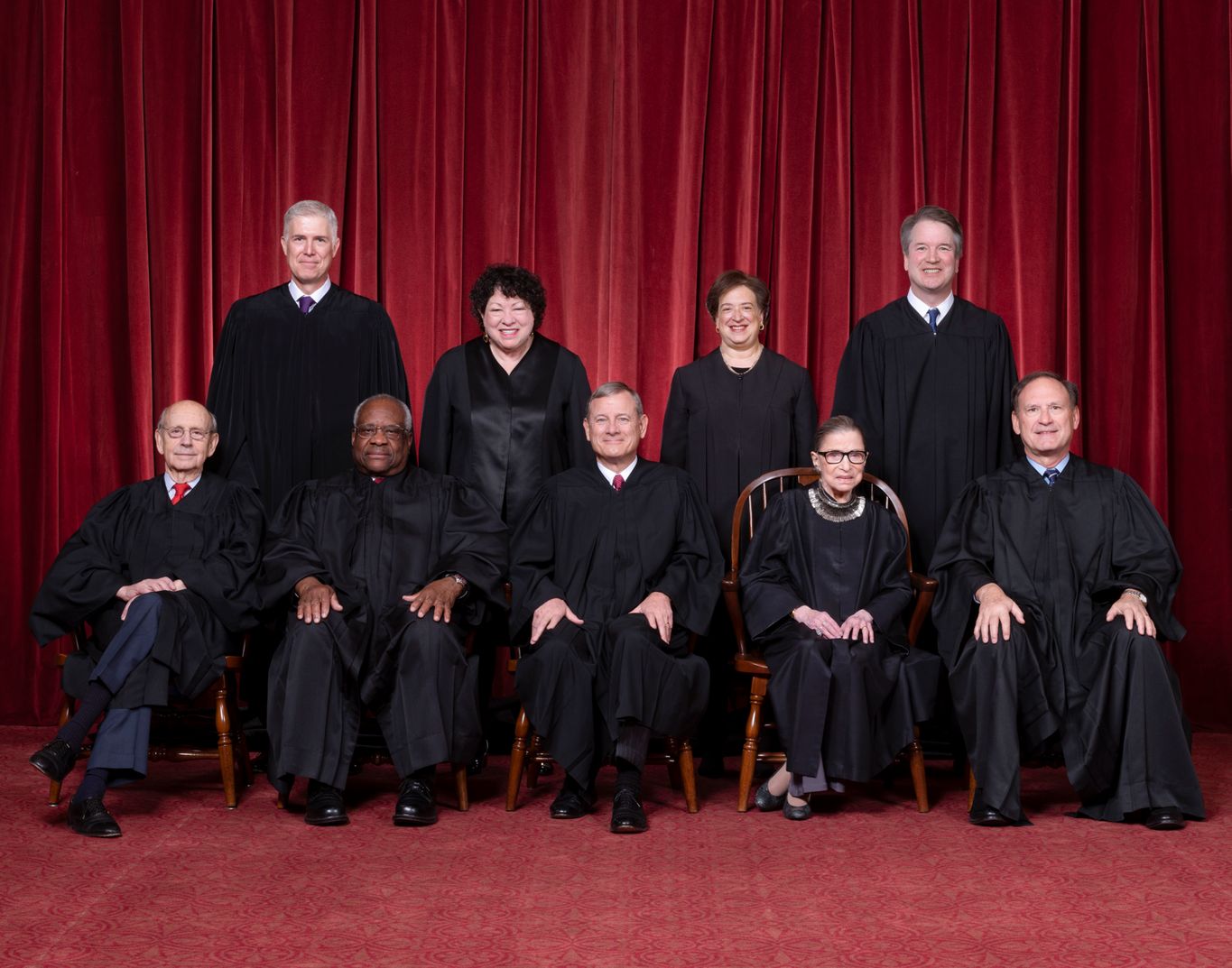 A group photo of all of the Justices of the Supreme Court was taken in Sept. of 2020, right before the death of Ruth Bater Ginsburg, pictured in the front row, second to last on the right. Photo credit: Fred Schilling, Collection of the Supreme Court of the United States.

Judge Amy Coney Barrett has replaced the late Justice Ruth Bader Ginsburg in the Supreme Court, tilting the court in a conservative direction.

Ruth Bader Ginsburg died at 87 years old after serving on the Supreme Court for 27 years. She was known for defending causes such as protecting DREAMers, from deportation and women’s rights. DREAMers are undocumented youth brought to the U.S. as children, who wish to remain, working and attending school in the U.S. Ginsburg was a vocal Democratic voice in the court. One of her final statements, given to her granddaughter Clara Spera on her deathbed, concerned the Supreme Court.

“My most fervent wish is that I will not be replaced until a new president is installed,” Ginsburg said.

President Donald Trump chose Barrett as Ginsburg’s immediate replacement on Sept 19., just one day after her death. She was then officially confirmed as a justice on the Supreme Court on Oct. 26. Trump is also responsible for nominating Justice Brett Kavanaugh, who was on trial right before his confirmation hearing for the sexual assault of Christine Blasey Ford. With Bader’s death and these two new justices, the Supreme Court is now predominantly Conservative, with Barrett being one of the most staunch Conservatives serving.

Barrett became a law clerk for former Justice Antonin Scalia from 1998-1999, who mostly pushed policies towards hard Conservatism. She was also a federal judge for three years. Barrett later went on to become a law professor for Notre Dame College for 15 years. Barrett is certainly an accomplished academic, but she also has professional and personal beliefs that may compromise her decisions in the U.S.’s highest court.

Barrett is an Originalist, which is someone who believes that the Constitution should be interpreted and enacted with its original intentions when it was created in 1787. Originalists argue that creating new legislation and not interpreting the constitution based on current issues is the answer to social success. Barrett was asked by the Associated Press to explain her Originalist view in easily understandable terms on Oct. 10.

“So in English, that means that I interpret the Constitution as a law, that I interpret its text as text and I understand it to have the meaning that it had at the time people ratified it. So that meaning doesn’t change over time. And it’s not up to me to update it or infuse my policy views into it,” Barrett said.

An opposing view of Originalism is Modernism. It interprets the Constitution as a ‘living document’ that is adaptable to current situations, stating that the original intentions of its writers and social era can be outdated. An example of this is abortion. It is not mentioned in the constitution specifically, but during Roe vs. Wade, the 14th Amendment was interpreted that because individuals had a right to privacy, this protects pregnant women with the right to have an abortion. Barrett’s personal beliefs dictate a strong anti-abortion stance.

The Constitution was written during a time in U.S. history that does not accurately mirror 2020 and beyond. Without a clear-cut reference to modern issues, it then can be interpreted to viewpoints, including Originalism.

Barrett is a devout Catholic, a faith that strictly does not believe in contraception or abortion. Barrett is also a member of People of Praise, a Conservative religious community that is also charismatic Catholicism, a faith that has Pentecostal influences. The People of Praise have a personal relationship with Jesus and events like being possessed by the Holy Spirit and speaking in tongues are not uncommon. The group also believes that wives must submit to their husbands and that romantic relationships should only be between men and women. Barrett’s personal beliefs and affiliations were questioned during her confirmation hearing for the appeals court in 2017 by Diane Feinstein, a California Senator.

“The dogma lives loudly within you,” Feinstein said.

Barrett responded that her private beliefs would not affect her decision-making in any professional arena.

”If you're asking whether I take my Catholic faith seriously, I do, though I would stress that my personal church affiliation or my religious belief would not bear on the discharge of my duties as a judge,” Barrett said.

Being an Originalist, staunch Conservative and serving under Scalia, who was strictly anti-abortion will affect Barrett’s choices in the Supreme Court. Though her personal religious beliefs may not affect decisions such as abortion, immigration and LGBTQ+ rights, her professional and judicial stances certainly will.