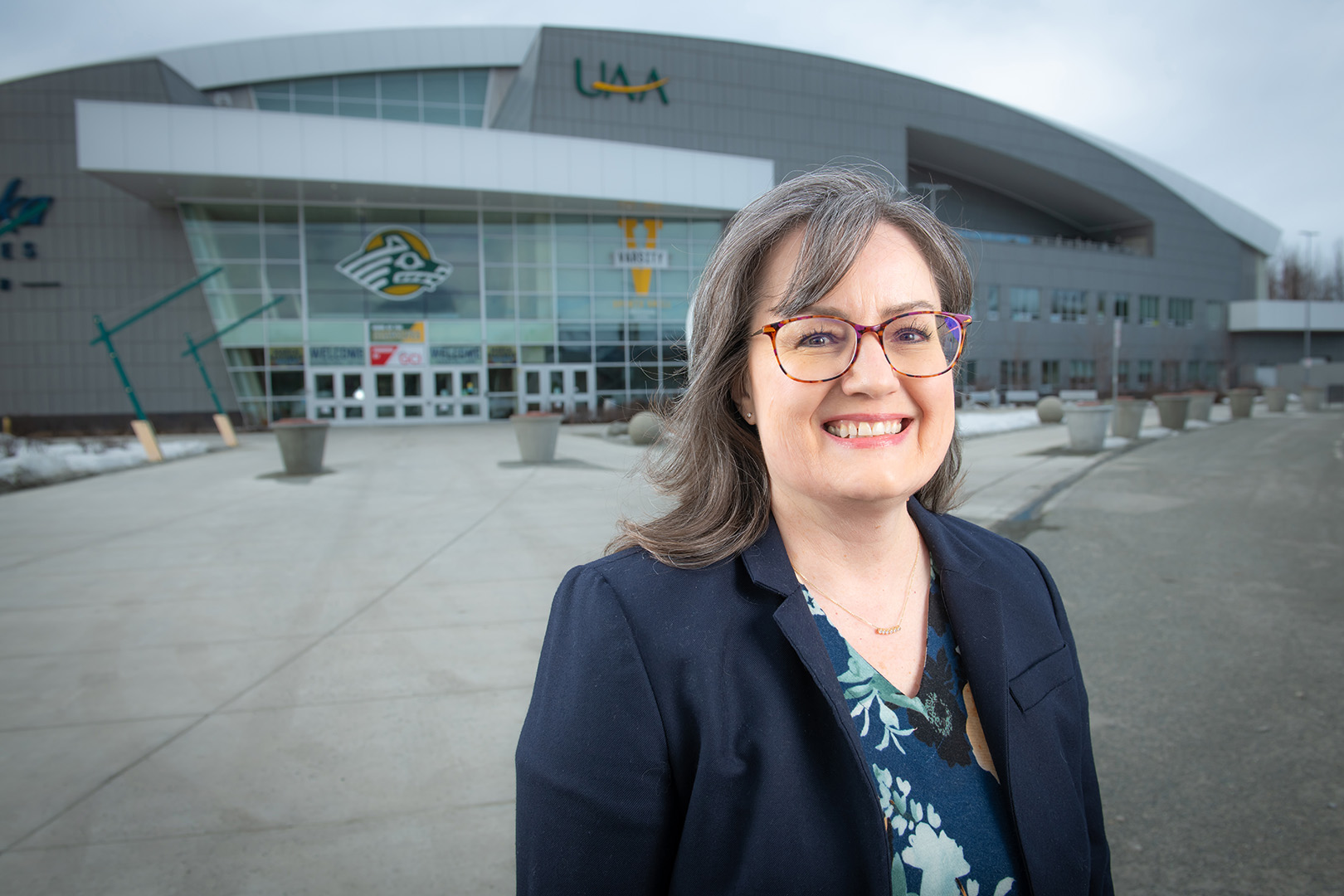 For this year’s spring commencement speaker, Teresa Novakovich, graduation has been a long time coming. Her first run at college was back in 1987. Between now and then she has  gone on mission for her church, raised five children and worked two different careers.

She sat for an interview reflecting on her time at UAA and plans for the future.

Returning to college at the age of 53, and working a professional career, Novakovich personifies the non-traditional student.

She came to Alaska at 12 years old  with her family. Upon graduating high school, she went to UAA, then called Alaska Community College. Eager for some adventure, she dropped out after only one quarter and applied to go on a mission for her church.

They sent her to Pennsylvania.

While this was a far cry from the exotic locations she was hoping for, it was nevertheless rewarding.

Speaking about the time there, she said, “I spent a year and a half in Pennsylvania as a full time missionary, really had great experiences.”

After the missionary work, she came back to Alaska and got married. She had five children and spent 18 years raising them.

Moving on to her first career, she was the bookkeeper and HR in her family business. She eventually went into a new job as an administrative assistant at the South Central Alaska Area Health Education Center.

AHEC is a federally funded non-profit that focuses on training and support for those working towards a career in healthcare.

As an administrative assistant she ran errands, entered data and picked up supplies. Due to her HR background, she was asked to sit in on a job interview for one of their teaching positions. Realizing she could handle the work, she became interested in applying for it.

There was one hang up: a bachelor's degree was a prerequisite.

She expressed an interest in returning to school to further her professional development, to which her supervisor gave full support.

Working across from campus at Providence Hospital, she selected UAA for the convenience.  Also, she was personal friends with a UAA advisor named Mike Smith, who helped her outline what she needed to do.

Returning to school after such a hiatus was intimidating and she credits Smith for helping her overcome it, saying, “having that in-person support made all the difference.”

The credits she earned back in 1987 were still good too.

She confessed the selection of her degree, sociology, came down to expediency.

Though the choice was pragmatic, it turned out to be fortuitous. Unexpectedly, and to her delight, she became fascinated with the subject. Also, it was applicable to her career in the field of health care worker development.

She loves that the field is data driven and was shocked to discover how much she liked her statistics class.

A professor who had a particular impact on her was Nelta Edwards. The first class she took with her was environmental sociology. Edward’s passion for the subject inspired Novakovich. Them being the same age helped forge a bond as well.

Novakovich said this of Edwards, “her sharing her story with me, and me with her, I just felt a connection. And she was so supportive, and so encouraging, and such a good instructor, that for the rest of my college plans I sought out her classes.”

Though her employer was flexible, Novakovich was still working a fulltime job. She took online and evening classes when possible. The online course helped cut down on travel time.

Experimenting with her workload, at one point she nearly overwhelmed herself.

Reflecting on the moment she bit off more than she could chew, she said and laughed, “I took three classes the first semester and I managed it really well, the next semester I took five and almost killed myself.”

Readjusting her expectations, she said, “slow and surviving was better than taking a full load.” From then on, she took only three classes a semester and one in the summer. Also, she avoided taking too many heavy classes at the same time.

It took five years, but she never again had such a problem.

An area where she initially had doubts was with her own abilities and feelings of being an outsider. The thought of returning to classes with younger students was intimidating.

Novakovich credits her time in school as making her a better critical thinker. Rather than be swayed simply by the strength of others’ opinions, she now approaches questions more analytically.

As she said, she started asking questions: “where’s the data to support the claim? Or are you just saying that? Tell me why you think that way.”

Perhaps the most surprising change she witnessed was in herself.

Going back to school, she took it as just another box to check. The possibility it could result in personal growth was beyond expectation.

She said even her own children have noticed a change in her.

Having to interact with so many different people and ideas, she describes herself as becoming more tolerant and open minded. As she said, “My world view has expanded like crazy.” She cites getting out of her social bubble as a factor in the change.

One impact of this is in how she relates to others, saying, “I’ve also learned how to get along with people that I disagree with, and it’s absolutely fine. I feel like before, one of us is right and one of us is wrong, and I had to defend what I felt was right.”

Taking the time to understand other people's perspectives, she can see why someone may hold a particular opinion, even if she disagrees with it.

While school pushed her to grow personally, her own life experiences played a part in her success. One skill she had to develop while raising five children was time management. This allowed her to balance taking classes, working and a family.

In addition to that was her own maturity. Not getting wrapped up in the world of partying and dating, she was able to focus more on her goals.

Because most of her classes were online, when the pandemic hit, it didn’t disrupt school too much. On the other hand, she got much of her socializing from work, where she was teaching in person classes on health subjects.

Like for so many, the pandemic disrupted that. Moving to a home office and doing most work over Zoom, she began to crave in-person interactions.

One area where the working conditions during COVID were especially difficult was in being able to draw clear boundaries between work, school and personal time. Work related anxiety was bleeding over into her normal life.

Her solution was to create clear boundaries. Part of that included changing clothes from when she “went to work” and when she was off. Also, she stayed out of her home office after she was done for the day.

To manage schoolwork, she would clearly block out time to study. When the time was up, she would put away the books and do something else.

These changes, she found, had a positive impact on her mood.

Regarding advice for new and existing students, Novakovich spoke about networks of support that are available, but often get overlooked.

She said, “there are so many resources out there to support you financially, socially, that most people don’t know about. So, if there is a desire to get an education, there are ways to overcome any barriers.”

She went on to add, “I was shocked at how many resources were available,” and “If you don’t look for them, you might not find them.”

In an ironic turn of events, which has not been lost on Novakovich, she’s been able to achieve her career goals at South Central Alaska AHEC while pursuing her degree.

Over the past five years she’s worked her way up through the organization and was promoted to director this past December. She gives credit to taking classes as part of that success.

Looking to the future, she plans on staying in the position. She said that she loves the work, though she may shoot for graduate school if she wants to set some more goals.

In the near term she is looking forward to taking a break from classes. She did sign up for one this upcoming fall, culinary arts.

In one last word of encouragement, she said, “it’s so cliched, but if I can do it anybody can.”