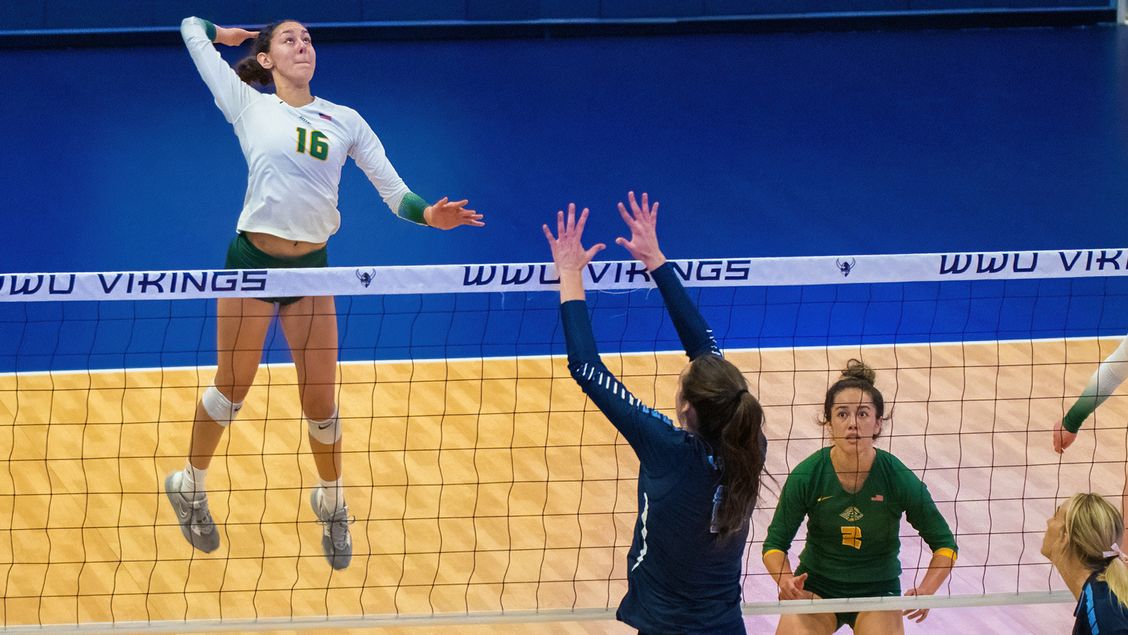 Eve Stephens delivers one of her 33 kills against Western Washington. Eric Becker photo.

The Seawolves' 13-game winning streak came to an end in Canada on Oct. 20 when the Simon Fraser Red Leafs won three of four games: 25-23, 23-25, 25-22, 25-23. Coming off the devastating loss, UAA found the energy and intensity to defeat the Western Washington Vikings 25-12, 25-16, 21-25, 25-23 in four frames. Eve Stephens' 33 kills and 35.5 points against the Vikings also broke the Great Northwest Athletic Conference record for a four-set match, and her kills were the most by a Seawolf player in any match since the NCAA moved to rally scoring in 2001.

UAA started off the game against the Red Leafs strong. They managed to come back from a 13-21 point deficit when Eve Stephens and Isabel Evans worked together to go on a 7-0 run. However, the Red Leafs answered, getting kills from Abby Willett and Hanna Kolof to hand the Seawolves their second first-set loss of the season.

The Seawolves controlled the second frame with help of Nicole Blue and Leilani Elder. Blue had three kills on four swings, and Elder served two aces and delivered two kills. UAA won the second set 25-23 to tie the game 1-1.

UAA trailed 7-0 and 18-9 in the third frame before another big rally behind Floyd and Elder. The Seawolves drew within 22-20, but SFU's Willett won the set 25-22 with a kill.

The Seawolves led 16-12 in the fourth frame, but their lead disappeared after five straight points from the Red Leafs. UAA never regained the lead, and SFU pulled ahead 23-20 with three consecutive points. Desperate to keep their undefeated streak alive, the Seawolves rallied to tie the frame 23-23, but they couldn't stop SFU's Davida Hill from delivering a cross-court attack. The Red Leafs won the final frame 25-23 after Lisa Jaunet hit into a block by Willett and Brook Dexter.

"They were able to take advantage of our mistakes, and they won the serve/pass game. We just dug ourselves too big of holes in the sets we lost. This is a tough loss, but we will refocus and get prepared for another huge match Saturday at Western Washington."

The Seawolves returned to the court Oct. 22 to take on the Western Washington Vikings. Green said the team was determined to secure a win after their devastating loss against Simon Fraser.

UAA took control of the match early, holding the Vikings to zero percent, hitting and leading 18-4. The Seawolves dominated the first frame, winning 25-12.

It seemed the Vikings might hand the Seawolves their second loss of season as they pulled ahead 16-11 in the fourth frame. In a tight situation, Stephens took over the game, delivering kills on five of the next seven railles to tie the frame 17-17. Blue helped UAA take the lead with a block on the next point. The teams traded points from there, but the Seawolves secured the 3-1 victory after Floyd set up Stephens for her final kills of the night.

Floyd dished 44 assists throughout the night, and Talia Leauanae added 25 more assists to the UAA statbook.

"Coming off that loss, I couldn't be prouder of how we put that behind us, refocused and executed in a tough environment against a big-time opponent," said Green.

"It was an incredible match by Eve, and I think Ellen did her usual great job of getting her and all of her teammates involved with quality looks for those kills. Our serving and passing games were on point early, and we played some much-improved defense against a very good team."

The Seawolves return to the Alaska Airlines Center on Oct. 29 at 2 p.m. to take on the Alaska Fairbanks Nanooks. Visit GoSeawolves.com for tickets. UAA students can attend games for free, but non-students can purchase half-price tickets ($5) for the season finale against Central Washington on Nov. 5.