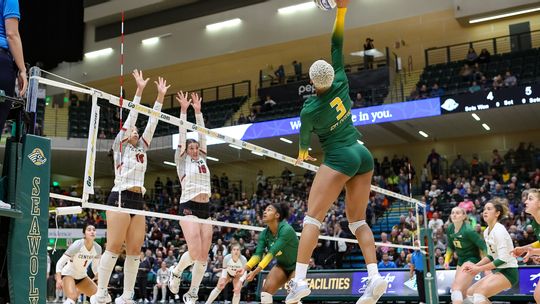 With two weeks remaining in the regular season, the Seawolves find themselves in the to No. 1 seed for the NCAA Division II tournament. Their 3-1 and 3-0 wins against the Northwest Nazarene Nighthawks and Central Washington Wildcats — in front of a NCAA record-breaking crowd —  helped them keep that position.

The Nighthawks took the court with authority with hopes to improve their seed in the playoffs. They led early in the opening frame, but the Seawolves rallied to earn a chance at set point at 24-23. However, two straight attack errors and an ace by NNU gave the frame to the visitors.

The Seawolves trailed 10-12 in the second frame, but they gained momentum after a kill by Lisa Jaunet followed by eight straight points from Ellen Floyd's serves. Eve Stephens gave the team three more points off of kills. UAA won the second frame 25-17 to tie the game 1-1.

The third set featured 10 ties and four lead changes. After the Seawolves secured an early 10-7 lead, the score remained within one or two points until the final rally. NNU's Oliva Wright delivered a kill to tie the game 22-22, but the Seawolves responded with consecutive kills from Isabel Evans and Leilani Elder to win the frame 25-22.

The Seawolves never trailed in the fourth frame, though the Nighthawks were able to shave a 16-7 deficit to 24-22. On set point, UAA coach Chris Green called a timeout to draw up a play. The Seawolves returned to court and Nicole Blue delivered a kill to win the frame 25-22 and win the game 3-1.

"I thought our serving game was good tonight, and that's what allowed us to finally get some momentum in the final sets," said Green. "Even when we weren't getting aces, we were making it difficult for them to get into their offense."

Stephens delivered 22 kills and had a career-high of 20 digs. Jaunet had eight kills, Blue and Evan tallied seven each, and Elder finished with six kills and a team-high of four total blocks. Madison Galloway had 10 digs and three assists.

The Seawolves returned to the court on Nov. 5 to take on the Central Washington Wildcats. Floyd and Stephens delivered huge efforts to help propel UAA to a 25-20, 28-26, 25-22 victory over the Wildcats in front of the largest regular-season crowd – 3,888 people –  in NCAA Division II volleyball history.

The second frame was a thriller, featuring 17 ties and five lead changes. Back-to-back kills by CWU's Tia Andaya gave the visitors a 18-16 edge, but Stephens and Evans answered with Seawolf kills. The teams then began trading points. UAA fought off a set point at 24-23, and the Wildcats did the same at 25-24 and 26-25. The Seawolves finally secured the set 28-26 after getting kills from Jaunet and Stephens.

The third frame was also close, featuring nine ties and three lead changes. Neither team fell behind by more than three points. Tied 22-22, Stephens delivered a kill to take the lead, and then stuffed CWU's Mariana Payne to make it 24-22.

On set point, all 3,888 people that piled into Alaska Airlines Center got on their feet to cheer on their team. The Seawolves won the set 25-22 after Stephens and Elder blocked another attack by the Wildcats, and the crowd erupted into cheers.

Floyd had 31 assists and a career-high of 24 digs, and Stephens added 21 kills, 13 digs and six blocks to the Seawolves' stats.

"That was another great effort against a very good team in a pressure-packed environment," said Green. "Our defense made the difference, especially Ellen and Lisa with some huge digs, and our block as well."

With their victories over Northwest Nazarene and Central Washington, the Seawolves now just need two wins to earn the Great Northwest Athletic Conference title. UAA will have their chance on Nov. 10 and 12, when they will take on Western Oregon and Saint Martin's on the road. The Thursday game is at 1 p.m. Alaska Daylight Time and the Saturday game is at 4 p.m. Alaska Daylight Time. Visit GoSeawolves.com for live links and stats.