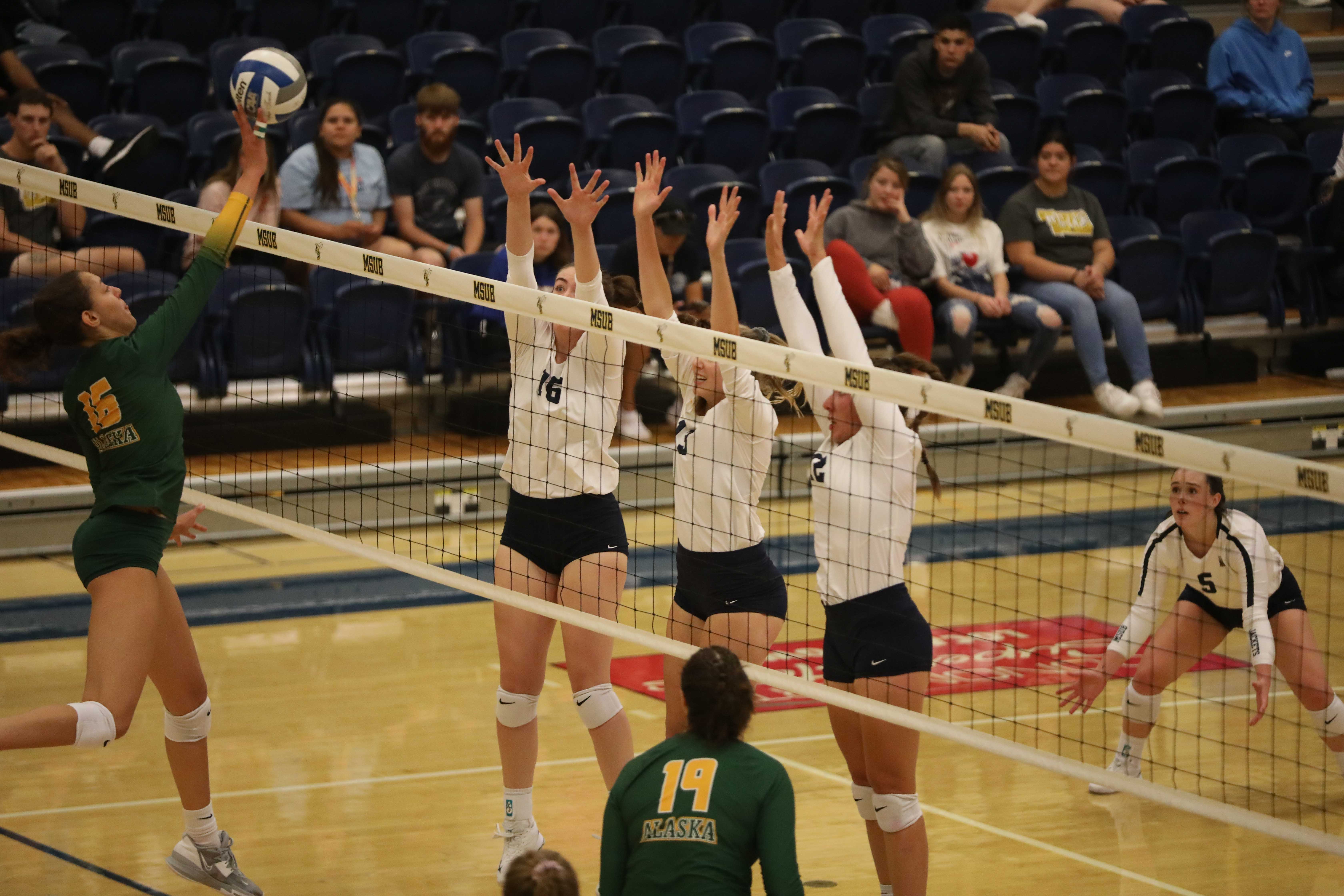 The Seawolves kept their winning streak alive after defeating the Montana State Billings Yellowjackets on Sept. 15 in three straight sets, and the Seattle Pacific Falcons on Sept. 17 in a close five set battle while on the road.

Eve Stephens began the week as the only player in NCAA Division II to rank in the top 25 nationally in kills, points and aces per set, and finished off the week as UAA's career points leader. In the second set against Seattle Pacific, Stephens surpassed Jen Szczerbinski’s 1,973 points, set from 1988-92, and finished the game with 1,982 career points.

Tied 14-14 in the opening set against the Yellowjackets, the Seawolves broke away with four straight points, capped by an ace from Makana Eleneki. Nicole Blue then had a pair of kills. The Seawolves went on a 11-3 run, and Lisa Jaunet helped her team win the set with a kill on set point.

The team maintained their momentum throughout the third set, hitting 0.476 percent with 21 attacks, ten kills and no errors. They won the third set 25-17 to continue their undefeated streak in the GNAC conference.

The Seawolves had led the nation in hitting percentage prior to their performances in home wins against Saint Martin's and Western Oregon, where they hit under -0.200 percent. UAA head coach Chris Green was happy to see his team was back on track to lead the nation again.

"It was encouraging to see our offense execute far better than we did last week," said Green. "Eve was terrific as usual, but it was Nicole Blue and Lisa Jaunet complimenting her on the other side with such strong hitting that kept Billings from ever getting a chance to make a run."

The team then headed to the Royal Brougham Pavilion in Seattle to face off against the Falcons. Tied 19-19 in the opening set, Talia Leauanae helped her team break away with an ace, and Jaunet and Isabel Evans delivered consecutive kills to win the set 25-21.

The Seawolves dominated the second set with the help of Stephens, who ripped six kills on seven attacks. These kills assisted Stephens in becoming UAA's new career points leader.

Down 2-0, the Falcons' came alive in the third and fourth sets, hitting 0.351 percent and 0.318 percent, respectively. UAA fought off three set points to tie the fourth at 24-24 on a kill by Blue, but the Falcons' responded with kills from Hannah Hair and Ashley Antoniak to tie the match at 2-2.

Both teams struggled offensively in the fifth set, but UAA's blocking helped them secure the victory. The Seawolves had five stuffs in the final frame, leading to eight attack errors and one ball-handling error by the Falcons. UAA built a 10-2 lead and hung on to claim the match point on a kill by Leilani Elder.

"That was a gritty win against a good team," said coach Green. "Our block came alive and helped us get the win, and our pin hitters did a good job offensively." With the victory against Seattle Pacific, Green captured his 300th victory in his 15th season at UAA.

The Seawolves will face off against Western Washington – the defending GNAC and NCAA Division II West Region Champions – at home on Sept. 22. They will also take on Simon Fraser on Sept. 24. Both games start at 7 p.m. at the Alaska Airlines Center. Tickets are available at GoSeawolves.com.