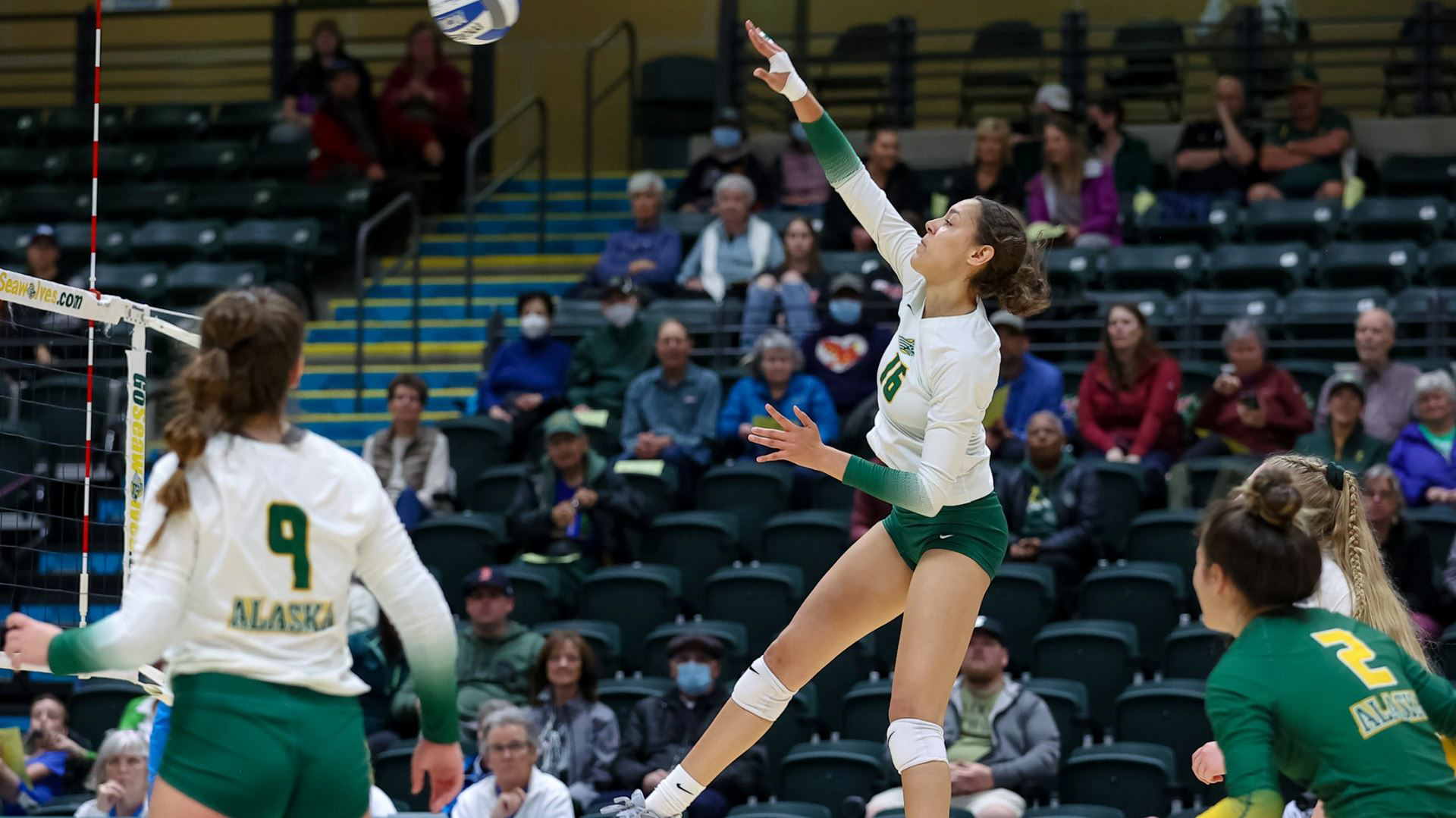 The Seawolves defeated Saint Martin's and Western Oregon in three straight sets to extend their overall record to 12-1 and maintain their perfect GNAC conference record of 2-0 this weekend at the Alaska Airlines Center. Senior Eve Stephens helped carry her team to victory both nights and also set a new GNAC record of 1,630 kills.

The Seawolves faced off against the Saints on Sept. 8. The Seawolf victory handed the Saints their first loss of the season. Senior Eve Stephens led the Seawolves to victory by securing a double-double with 10 kills and 11 digs. Stephens also recorded three of UAA's ten aces. Outside hitter Lisa Jaunet added eight kills to the Seawolves stats.

"We were very fortunate the service game went our way on a night when our offense was not running well otherwise," said head coach Chris Green, who recorded his 750th career coaching victory after the Seawolves' victory.

The Seawolves won the first set 25-15, but the Saints gave them a run for their money in the first half of the set. Tied 12-12, UAA used two straight Saints attack errors to start a 6-0 run. The Seawolves then closed the set with five straight points, including a pair of kills by setter Ellen Floyd.

The Seawolves extended their lead gradually throughout the second set with the help of sophomore Leilani Elder, who returned to the lineup this game after facing an injury that kept her out last week. Elder produced kills on all three of her attacks in the second set and finished the game with a team-high of four total blocks.

Trailing 2-0, the Saints continued to fight to keep their undefeated record. They managed to tie the third set at 19-19, but then the Seawolves benefited from the Saints final service error and took the lead for good. The Saints fought to stay alive and trailed 23-22 after consecutive blocks by Maddy Gooding and Loredana Fouonji, but UAA's Emma Patterson delivered a kill moments later to lead the Seawolves to victory.

Floyd finished the game with 25 assists and two aces, and Makana Eleneki had a pair of aces and no service errors. Senior libero Talia Leauanae led UAA with 13 digs. Stephens raised her career kills total to 1,621, drawing closer to the GNAC record of 1,628, set by Western Washington's Abby Phelps from 2015-18.

The win against the Saints - who have not beaten UAA since 2007 -  also extended the Seawolves' longest head-to-head win streak to 28.

"That wasn't our prettiest offensive effort again, but we will take the result," said coach Green.

"I'm really happy for Eve to achieve the GNAC kills record. Since her first day as a freshmen, she's worked hard to improve every facet of her game. You can't attain a record of this magnitude without great dedication, and she is a testament to that."

Tied 5-5 in the opening set, Stephens tipped a kill off a Western Oregon block and followed with three straight aces, sparking a 9-0 Seawolf run.

Western Oregon trailed by four points halfway through the second set but lost their momentum after a service error. This error opened the door on another huge Seawolf run as UAA scored ten consecutive points to finish the set. The Seawolves held Western Oregon to hitting -0.269 percentage in the set, meaning they forced Western Oregon to make more errors than kills.

The Seawolves fell behind in the third set, but Stephens helped her team come back from behind with her GNAC record-tying kill. Western Oregon fought to stay in the game, drawing with 17-16 after a kill by Haille Hartsook, but UAA's Stephens answered with her final kill and teamed up with Elder on a block to make it 20-16. Sophomore outside hitter Nicole Blue sandwiched kills around Stephens' final ace to close the match.

Blue finished with six kills and four digs, Elder had five kills and four total blocks, and Leauanae had eight digs and two aces for UAA. The Seawolves held Western Oregon to negative hitting for the first time since Oct. 2018.