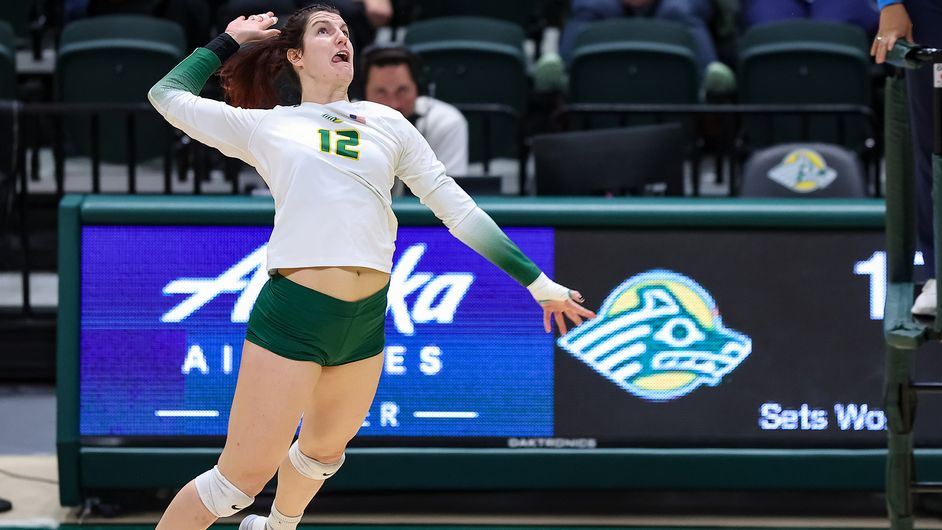 The UAA Seawolves defeated the UAF Nanooks on the opponent's home court on Oct. 1 to secure their ninth straight victory and remain the only undefeated team in GNAC.

The Nanooks took an early lead in the opening frame, putting the Seawolves into a 10-3 hole. Ellen Floyd then struck a kill and Makana Eleneki served an ace, putting UAF's momentum to a halt. The Seawolves chipped away at the opponent's lead until Eve Stephens tied the set 15-15 with a kill. The Seawolves won the first frame 25-20 after back-to-back mistakes by the Nanooks.

"A lot of teams might have been rattled by a slow start like that out of the gate, but they showed that mental toughness again which has been one of our calling cards this year," said head coach Chris Green. "This was a great team victory, especially considering it came against a quality opponent and a motivated rival on their home court."

The second frame featured seven ties and six lead changes before the Seawolves took control late into the frame. Trailing 17-16, UAA went on a 6-0 run, highlighted by two aces from Talia Leauanae and a block from Stephens and Leilani Elder. Elder and Floyd then stuffed UAF's Rilee White on set point to win the frame 20-19.

The Seawolves dominated the third set, racking up 15 kills with a 0.591 hitting percentage and scoring four aces. Lisa Jaunet had five kills on eight swings and Elder converted on all three of her attacks. The Seawolves won the third set 25-14 to sweep their tenth opponent this season.

The Seawolves racked up an impressive set of stats against the Nanooks, including 12 kills from Jaunet, 29 assists from Floyd, six kills and two blocks from Nicole Blue, and a team-high of four blocks from Isabel Evans.

The team will finish the first half of the GNAC schedule next week on the road. They'll face Central Washington in Ellensburg on Oct. 6 at 6 p.m. Alaska Daylight Time followed by a match against Northwest Nazarene in Nampa, Idaho on Oct. 8 at 10 a.m. Alaska Daylight Time. Visit GoSeawolves.com for links to live video and stats.