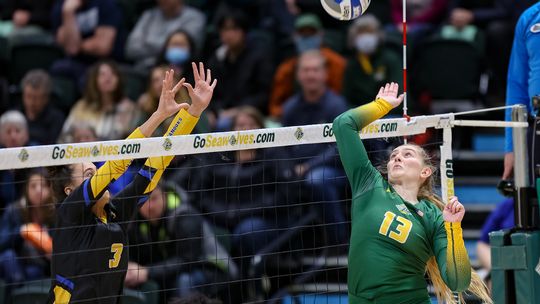 Setter Ellen Floyd helps lead her team to a four-set victory against UAF with 35 assists and a career-high of nine kills. Photo by Skip Hickey

The Seawolves defeated the University of Alaska Fairbanks Nanooks at home in four frames to improve their Great Northwest Athletic Conference record to 13-1. This victory helped the team maintain their one-match advantage over Western Washington in the GNAC standings.

The Seawolves struggled in the opening frame, falling behind midway through. They couldn't get their momentum back and lost the frame 18-25.

In the third frame, the Seawolves claimed an early 12-5 lead and maintained a lead throughout the frame. With UAF desperate to stay alive, the Seawolves were forced to fight off a Nanook comeback. UAF fought to tie the frame 17-17, but UAA quickly took the lead again.

UAF's Ella Bines smashed a kill to get her team within one point, but that's as close as the Seawolves allowed. Eve Stephens and Lisa Jaunet delivered back-to-back kills to extend their lead, and Stephens delivered on set point to help her team win the frame 25-20.

The Seawolves opened the fourth frame with a 8-1 surge and never let the Nanooks get closer than 15-12. Jaunet and Isabel Evans combined on three blocks to help their team go on a 10-3 run.

On set point of the fourth frame, the whole crowd got on their feet to cheer on the Seawolves. The Nanooks served the ball to the Seawolves, who set up a play for Stephens. As Stephens winded up for a kill, the crowd began to cheer in anticipation. The Alaska Airlines Center erupted into celebration as the ball hit the ground, and the Seawolves won the final frame 25-15.

"We looked flat in the first set, which was unusual for us, but I'm pleased with the execution we displayed over the last three sets," said UAA coach Chris Green.

"Ellen was at her best today in terms of deciding when to set and when to take her opportunities for kills, and our block really got going and helped us put things away in the final set."

Ellen Floyd delivered 35 assists throughout the game and secured a career-high of nine kills in just 13 attempts. Stephend added 19 more kills to the Seawolves' stats, along with nine kills from Jaunet and seven kills and five blocks from Leilani Elder.

The Seawolves return to the Alaska Airlines Center on Nov. 3 — to face off against fellow playoff contenders Northwest Nazarene — and Nov. 5 to take on Central Washington. Both games are at 7 p.m.

UAA is attempting to set the NCAA Division II Volleyball regular-season attendance record during the Nov. 5 game. Students can help the team break this record with free admission, and tickets are half-price ($5) for other attendees. Visit GoSeawolves.com to purchase tickets in advance.