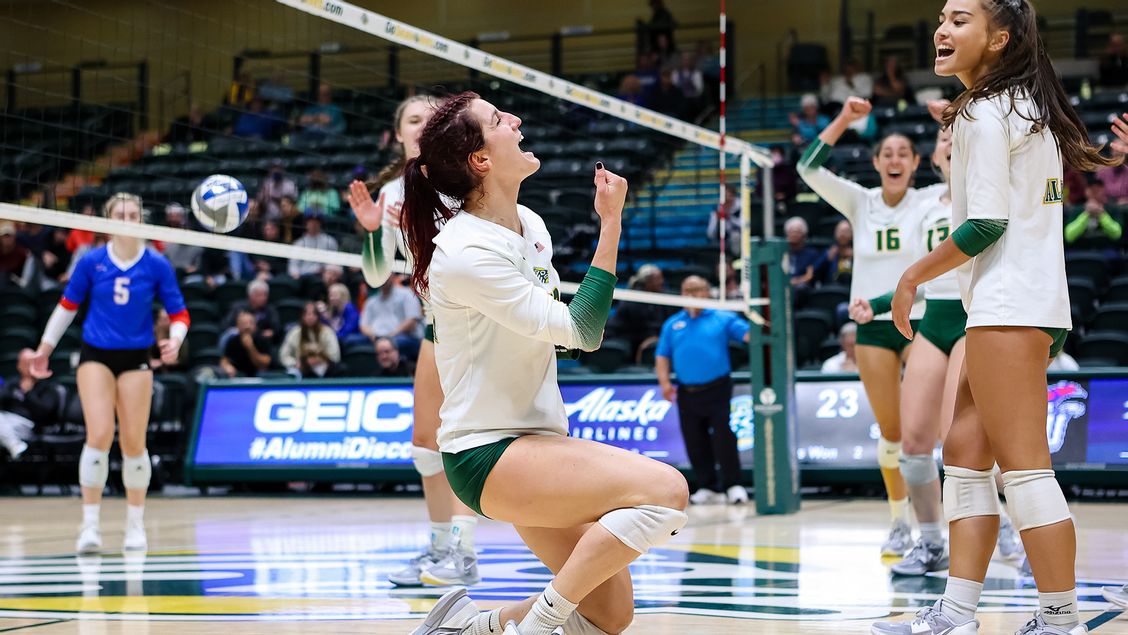 The Seawolves defeated Seattle Pacific and Montana State Billings at the Alaska Airlines Center on Oct. 13 and 15 to extend their Great Northwest Athletic Conference record to 11-0.

UAA took the court against the Seattle Pacific Falcons on Oct. 13 and defeated them for the second time this season in three straight sets. Their victory over the Falcons ties the third-longest streak over any team in program history.

Unlike earlier in the season – when the Falcons pushed the Seawolves to five sets – the team took control early in the game and remained dominant throughout each frame.

Tied 6-6 in the opening frame, Eve Stephens scored her first ace of the night. The Seawolves then continued to stretch their lead. The Falcons fought to stay alive, going on a 4-0 spurt to cut UAA's advantage to 21-18. Seawolves coach Chris Green then called a timeout to refocus the Seawolves' energy. Following the timeout, UAA scored four straight points – including kills from Leilani Elder and Stephens – to win the opening frame 25-18.

"Our serving game and our block were huge tonight, helping us really throw their hitters out of rhythm," said Green. "That was another great overall team effort for us again."

Stephens finished the game with her first errorless hitting performance of the season. She hit 0.565 percent – her second-best percentage this year – had two assists, six digs and three block assists.

Lisa Jaunet and Nicole Blue both tallied six kills. Elder added four kills and three block assists to the Seawolves' stats. Isabel Evans tied her career-high with seven blocks and Talia Leauanae had 10 digs, three aces and was 17-of-17 on serve receptions.

Volleyball hit the court again on Oct. 15 to face off against the Montana State Billings Yellowjackets. Floyd collected 30 assists, six kills and five aces to lead a dominant 25-16, 25-7, 25-19 sweep.

UAA never trailed in the first two sets and only committed one attack error in each set.

The Seawolves trailed 10-9 briefly in the third set, but then Jaunet ripped three kills during a 6-0 Seawolf run to help her team retake command.

UAA's victory over the Yellowjacks improves their all-time series lead to 55-11.