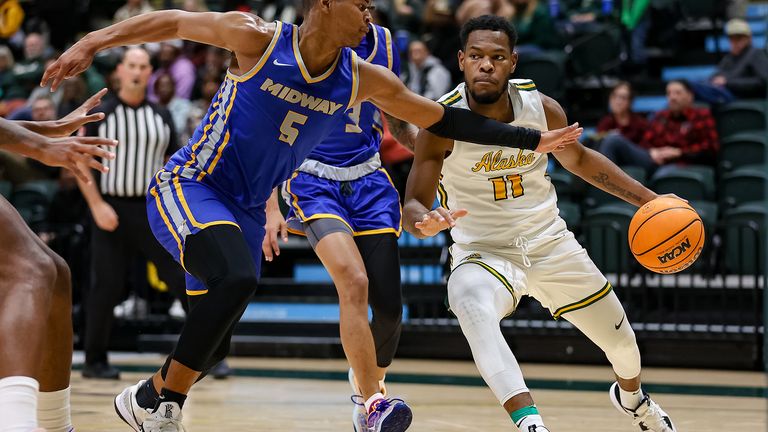 The Seawolves defeated National Association of Intercollegiate Athletics school Midway University in back-to-back games to start their season with a 2-0 record.

In the first game of the series, the Seawolves trailed 4-3 in the opening minutes. They then took control of the game with back-to-back three-pointers from Tyson Gilbert and Da'Zhon Wyche to start a 14-5 surge.

UAA continued to expand their lead, and Caleb Larsen nailed a three-pointer to push the lead to 25-14 with eight minutes left in the first half. The Seawolves entered the locker room for halftime with an advantage of 41-30.

Midway kicked off the second half with a short jumper, but they remained scoreless for the next few minutes as the Seawolves went on a 9-0 run. UAA continued to push their lead to 71-45 after a putback layup from Jaron Williams. The Seawolves won the game 87-63.

"I thought we performed well for such a new squad," said UAA head coach Rusty Osborne. "We moved the ball well and showed good balance. This was a positive start to a long process, and we're excited about our outlook."

Gilbert, a transfer from Colorado State University Pueblo, made his Seawolf debut against Midway. Gilbert had missed the last two seasons after the 2020-21 season was canceled because of COVID-19, and he had to sit out of the 2021-22 season because of an achilles tendon injury.

"It was great to finally see Tyson back on the court," said Osborne. "He's worked so hard to get back to this point, and we're thrilled to finally have him contributing out there."

The Seawolves returned to the court the next day hungry for another victory. Midway didn't make it as easy for them this time, though. The opposing team led for the opening minutes and didn't let UAA run away with the game.

The Seawolves found themselves tied 37-37 with a few seconds left in the first half after Midway made 11 of their last 16 shots. Before the buzzer though, Wyche connected with a wide-open Garrity at the three-point line. Garrity released the ball a second before the halftime buzzer and nailed the shot. The crowd jumped to their feet and cheered the Seawolves into the locker room with a 40-37 lead.

UAA held onto their lead throughout the second half but couldn't shake Midway off their backs. With eight minutes left in the game, Midway's Will VanHook cut his team's deficit to six points with a putback shot. The Seawolves didn't let this faze them, though. Instead, Wyche passed up the court to Sawyer Storms on a fastbreak. Storms then dunked the ball, which got the whole crowd on their feet.

After Storms' dunk, the Seawolves went on a 11-0 surge to lead 77-60 with four minutes left in the game. UAA continued to outscore Midway for the final minutes and won the game 87-65.

"We experimented a lot with our lineups tonight, trying to see how different groups played together," said Osborne. "Once we went back to a more traditional substitution pattern, I think we responded well to close things out."

The Seawolves got double-figure scoring from six different players. They were led by 19 points from Storms, followed by 14 points from Wyche, 13 points from Viney and Gilbert and 12 points from Bradley and Williams.

The Seawolves return to the court on Nov. 3 at 6 p.m. Alaska Daylight Time in an exhibition game at NCAA Division I school UC Irvine in California. Visit GoSeawolves.com for live links and stats.