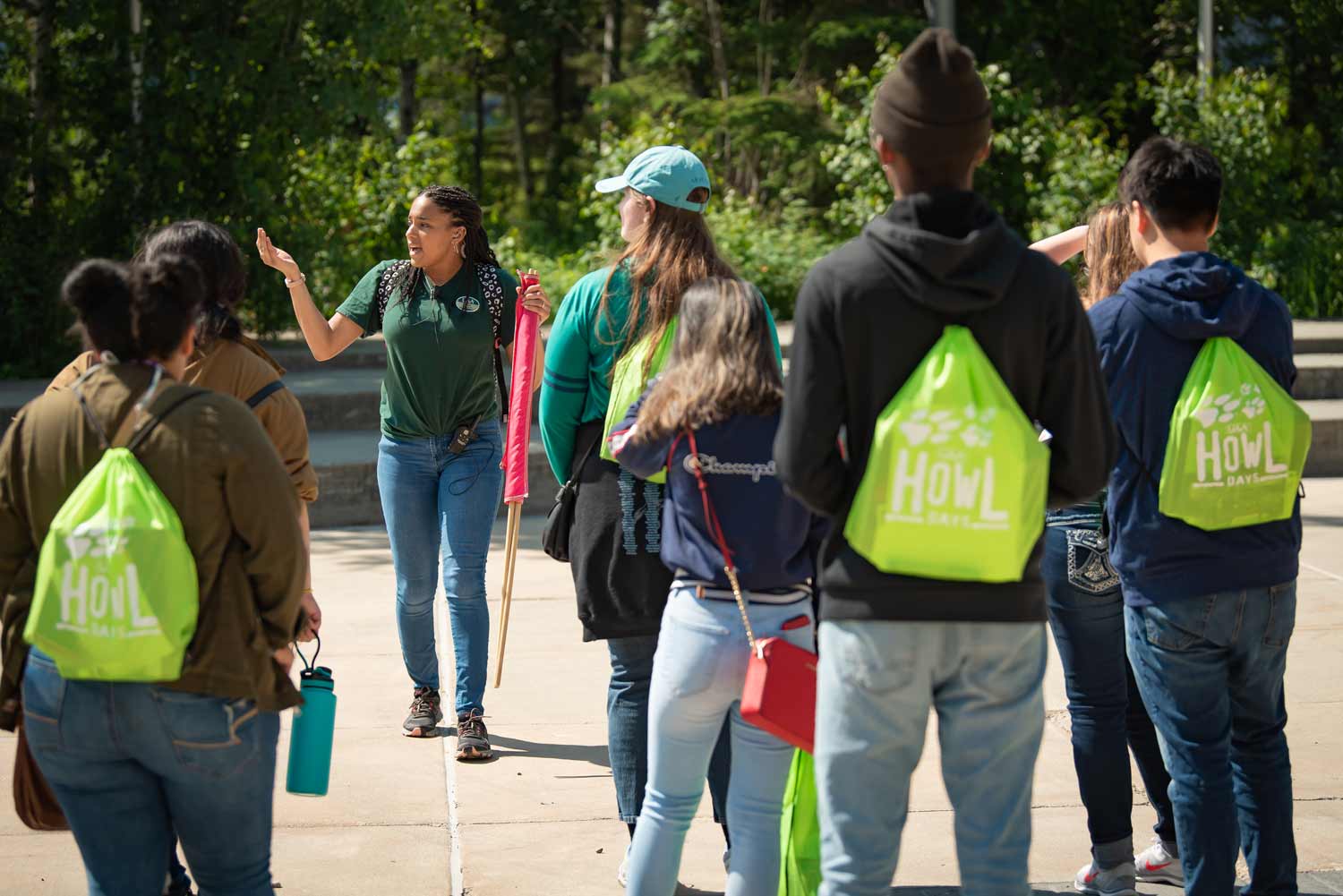 New students get a tour of campus at Howl Days. Photo Courtesy University of Alaska Anchorage.

The campus might be quiet over the summer, but student orientation is busy hitting the pavement and preparing students for success with their campus tours.

In an interview, Orientation and Campus Visit Coordinator Daphne Ang said there are a lot of things first-year students don’t know and the tours are a way to learn about the resources UAA has to offer.

The Howl Days tour consists of a presentation, a campus walk, a presentation by a student advisor, and an optional tour of UAA’s residential housing. In addition, there are snacks and free Seawolf swag.

Ang said that anyone can take the tour, not just first year students.

Never having gone through orientation, despite a few years under my belt, I decided to sign up and give the tour a shot.

There were about 40 students in the group, and we started the tour by playing a type of bingo where we had to get the names of others with unique characteristics like someone who is left-handed or somebody born in Alaska.

After breaking the ice, the orientation leaders put on a PowerPoint presentation that covered basic information like UAA email, Wolfcards, parking permits, and ordering books via the online bookstore.

Finally, there was mention of some ways students could participate in campus life via programs like USUAA, athletics, and Green Fee Board.

One interesting thing that stood out was the number of free things that students have access to. UAA students can get into athletic games, ride the people mover, and use campus gym services all for free.

Going onto the walking portion of the tour, we split into two groups and made our way around campus. Ang led our group, and she talked about the different buildings and the departments each contained.

After regrouping with the other students, First-year Advisor Justin Dickens gave a presentation on the different types of classes UAA has to offer and how to register.

On the residential portion of the tour, Director of Resident Life Ryan Hill answered some questions about student housing and took the group through the residence halls.

The total time for the tour including the residential option was about 4 hours.

The online tour is conducted via Zoom. It has the same presentations as the Howl Days tour and the campus tour is a slide show. It is roughly two hours long, Ang said.

The virtual self-guided tour is only about one hour in length.

For anyone who wants to participate in the Howl Days tour there are five more slots open this summer. Ang said that the only thing students need to bring with them is a comfortable pair of walking shoes.

Also, the next opportunity for a tour after summer ends are in December and January, she said.