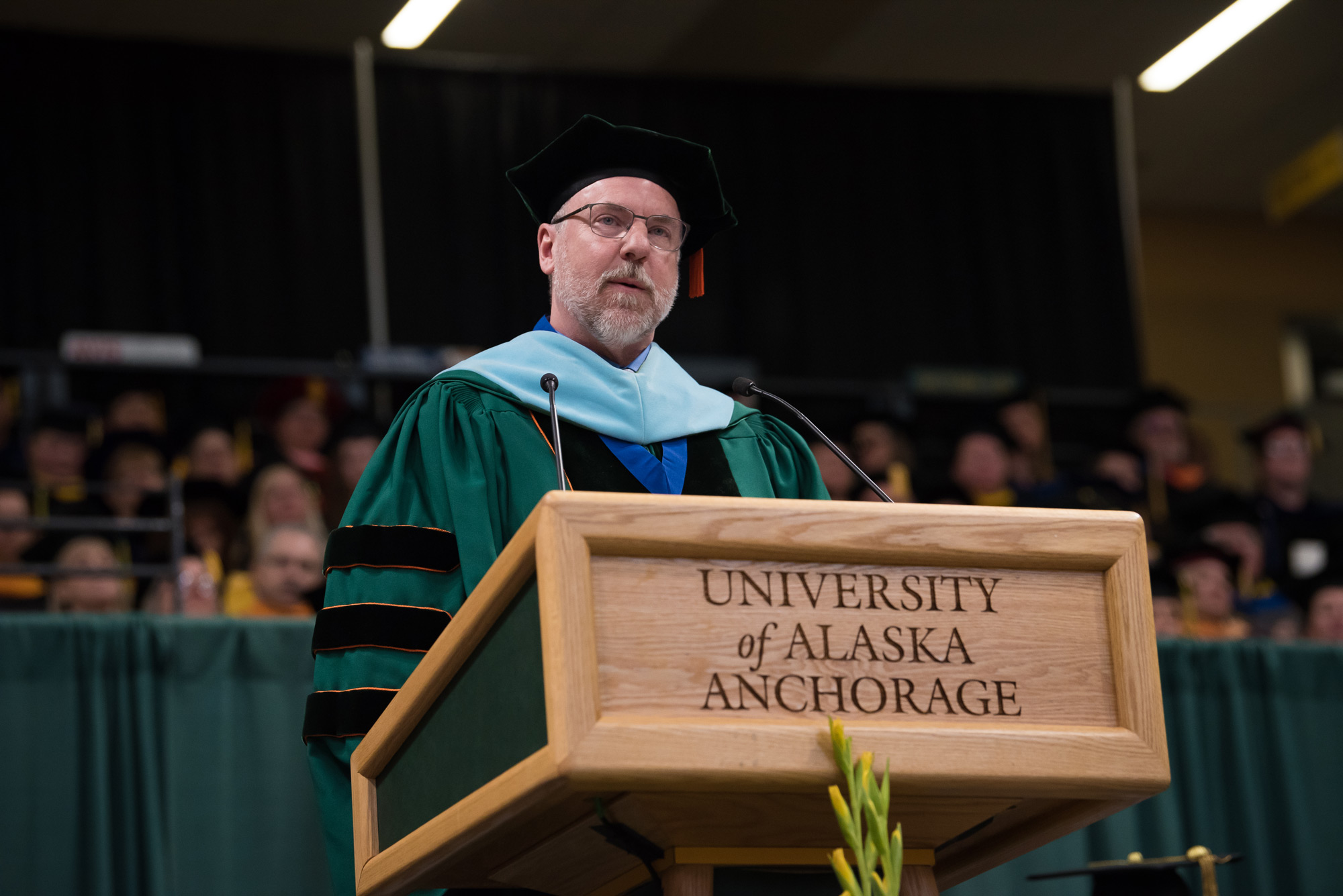 This year, UAA’s vice chancellor of student affairs, Bruce Schultz, will be retiring. Although he moved into his position in 2010, his time with UAA stretches back to 1991.

To recognize his 30 years of service to UAA, the University of Alaska board of regents voted to approve a resolution of appreciation for Schultz at their meeting on June 3.

At the meeting, Regent Mary Hughes said that his career has been “exemplary.”

In an interview with The Northern Light, Schultz talked about his background, coming to Alaska and his time at UAA.

He also shared some of his own challenges at UAA and advice for success.

Schultz was born and grew up in a small farming town of roughly 2,700 people in Wisconsin. At the age of 11, he moved with his family to Arizona.

In Arizona, he developed an interest in Native American culture and showed an independent side by taking flying lessons at the age of 15 without his parents knowing and paying for his own trip to Germany by selling candy to friends.

Schultz said growing up, he wanted to join the Air Force. His father, on the other hand, saw education as the path to success and wanted him to go to college. A point of tension between them, Schultz ultimately ended up going to Arizona State for his first semester of school.

His parents, who had moved back to Wisconsin, convinced Schultz to come back by offering him a paid vacation to Europe, which he jokingly described as a bribe to move home.

Transferring to the University of Wisconsin Oshkosh, he majored in international business and German.

His first years of college got off to a rocky start. Schultz said that this was in large part because he was not, for the first few years at least, a very serious student.

While an undergraduate, he took on various student-leadership roles, which included being a residential advisor.

He came to realize that helping his peers become successful was more enjoyable and meaningful to him than what he experienced in the business world – working as a manager at Target – so during his senior year, he made plans to pursue a career in student affairs.

He went on to Ball State to earn a Master of Education in student affairs administration in higher education.

While finishing his master’s degree, Schultz took an opportunity to come to Alaska in the summer of 1991 to intern at UAA.

Living on campus, he was initially struck by the beauty of the state.

Also, he was able to experience a variety of outdoor activities such as ATV riding and salmon fishing.

He returned to the same internship in 1992 and while performing a national job search, a position opened at UAA.

Becoming the administrative coordinator for UAA’s residence life, he expected to stay on for a year or two though he would come to realize that there were opportunities to build something from the ground up here.

In the 90s, UAA’s student affairs was a far cry from the well-developed, best-in-the-world programs that Schultz had seen in the Midwest. He also found an eagerness and energy around him to improve the university.

He said it was easy to be innovative and creative, and people were always looking for ways to make things happen rather than saying “no.”

This energy, which has persisted through the years, and Alaskan’s independent streak is something that separates Alaska from the Lower 48, Schultz said.

Though coming to Alaska on his own was a challenge, the state fit his adventurous, problem-solving personality, wrote Schultz  in a follow up email, adding that he’s found the most important life lessons happen in the face of such challenges.

He said he also developed an appreciation for the state’s history and Alaska Native culture.

While working at UAA, he went on to get his Ph.D. in educational and organizational leadership from the University of La Verne, writing his dissertation on how freshmen adjusted to their first year of school at the University of Alaska.

Student affairs is a broad field that seeks to help students in a number of different ways Schultz said.

It ranges from enrollment, financial aid and health services to crafting university policy on campus safety and codes of conduct. In addition to that, it seeks to offer students ways to connect and participate in the university and learn real-world skills in leadership and employee positions.

Schultz said that student affairs complement the work done by faculty, and he emphasized the way they seek to intentionally craft programs and create experiences that move students forward in their development.

Also, when a student is in crisis, student affairs steps in to help. Early on in his career, Schultz had two moments that gave him firsthand experience of how important this work is.

While an RA at Oshkosh, his first time dealing with a student crisis was when a resident had been sexually assaulted. He was a part of the investigation and supported her through her trial.

Also, his roommate on campus during his internship, who was also his friend and introduced him to the state, died by suicide. This had a deep impact on him personally.

These experiences inform his understanding of how a crisis impacts students and staff.

He said that the policy of how the institution demonstrates care is a part of that.

“When I deal with those situations, first and foremost I want the staff and  the students who are affected to feel a deep level of care,” he said.

Schultz said that UAA's Crisis Team manages between 500-600 students in crises of varying degrees of severity each year.

Being himself a first-generation college student has helped him to appreciate the unique challenges those students face.

Schultz said: “So many of UAA students are also first generation, and what that means is you come to college without having the support network that understands what you need to do, when you need to do it, and why you need to do it. You’ve gotta figure those things out on your own. That’s UAA students. So I’ve always had this understanding and appreciation for how challenging it is for our students.”

He said that being dean of students was his favorite position, having the perfect balance of leadership and opportunity for working with students directly.

Schultz said he values the personal one-on-one conversation with students, but there is less opportunity for those types of interactions the higher up you go in the university.

Schultz said the past five years have been a particularly challenging time at UAA.

He said that the budget cuts, potential consolidation of the university system and cuts to various programs have put strain on everyone in the UAA community. He said the disruptions left people with no extra mental capacity.

And then COVID-19 hit and brought even more problems.

Schultz shared some tips on how he has managed to be successful, even in the face of such challenges.

He said it’s important to build relationships before a crisis happens. It’s easier to do than when things are falling apart, and people’s instincts are to turn inward and be defensive.

Such relationships are more open and collaborative, and can make a difficult time better, he said.

Also, he said when faced with a wide variety of opinions, putting students’ success back in the center of the conversation has helped refocus people on a shared priority. It’s something that everyone agrees with even if they have different ideas of what it means Schultz said.

He also said that working with integrity and pursuing excellence can help mentally guard against personal attacks and improve self-confidence.

For students, Schultz said it’s important for them to think long-term and be intentional in their college plans. He said that students tend to get bogged down in the minutia of short-term problems such as late fees, and overlook the bigger things like how to pay for school overall or a specific graduation date.

And if students are having problems, it can be helpful to reframe the issue as a learning opportunity rather than a weakness. He said seeing it from a perspective of “I’m just curious; help me to understand” can be a great way to get at problems while saving face.

In fact, he’s found that approaching any discussions – especially difficult ones – from the “I’m just curious” angle often moves talks in a productive direction.

For a brief period in 2020-2021, Schultz served as interim chancellor of UAA. With all that was going on, he said the university needed stability above all else while there was a change in leadership, and he saw an opportunity to bring that to the position.

He said that he was surprised when UA President Pat Pitney picked him.

Schultz said that an important mentor for him during his time at UAA was Linda Lazzell, the previous dean of students and vice chancellor of student affairs.

Regarding what a mentor does, he said: “They’re helping you think through challenges, and think through situations, and are asking you hard questions. They don’t give you the answers, but it’s helpful to have a confidant … to point out when you might be seeing something incorrectly.”

“No one’s perfect, and it’s just nice you can have someone you can trust who can point out where there might be some opportunities for you to think differently.”

On his motivation for retirement, Schultz simply said that “it’s time for a break.” At 54 years old, he said that he is not completely ready to leave the workforce but intends to take the next year off at least.

Top of the list for what his future holds is a nine-week trip to Europe though he did express some apprehension at finding ways to keep himself occupied beyond that.

He said there is nothing to quite prepare you for the sudden loss of obligations and goals – normally supplied by work – that go along with retirement.

He said he has an excellent staff and, along with the students, they will be what he misses most leaving the university.

For his service, Schultz also received a citation honoring him from the Alaska State Legislature.

UAA Chancellor Sean Parnell wrote in a letter to the UAA community: “Bruce has always believed in empowering and supporting students, investing in staff development and building operational capacity. Over the last 25 years, he has attended every student government meeting his schedule would allow. He regularly attends student events on campus and personally takes time to meet with students. It is impossible to measure the impact of his many contributions at UAA.”

There will be a celebration for his retirement on June 28, between 3:30-5 p.m. in the Student Union Den.