Nolan Nicholas proves his leadership with the Senior CLASS award 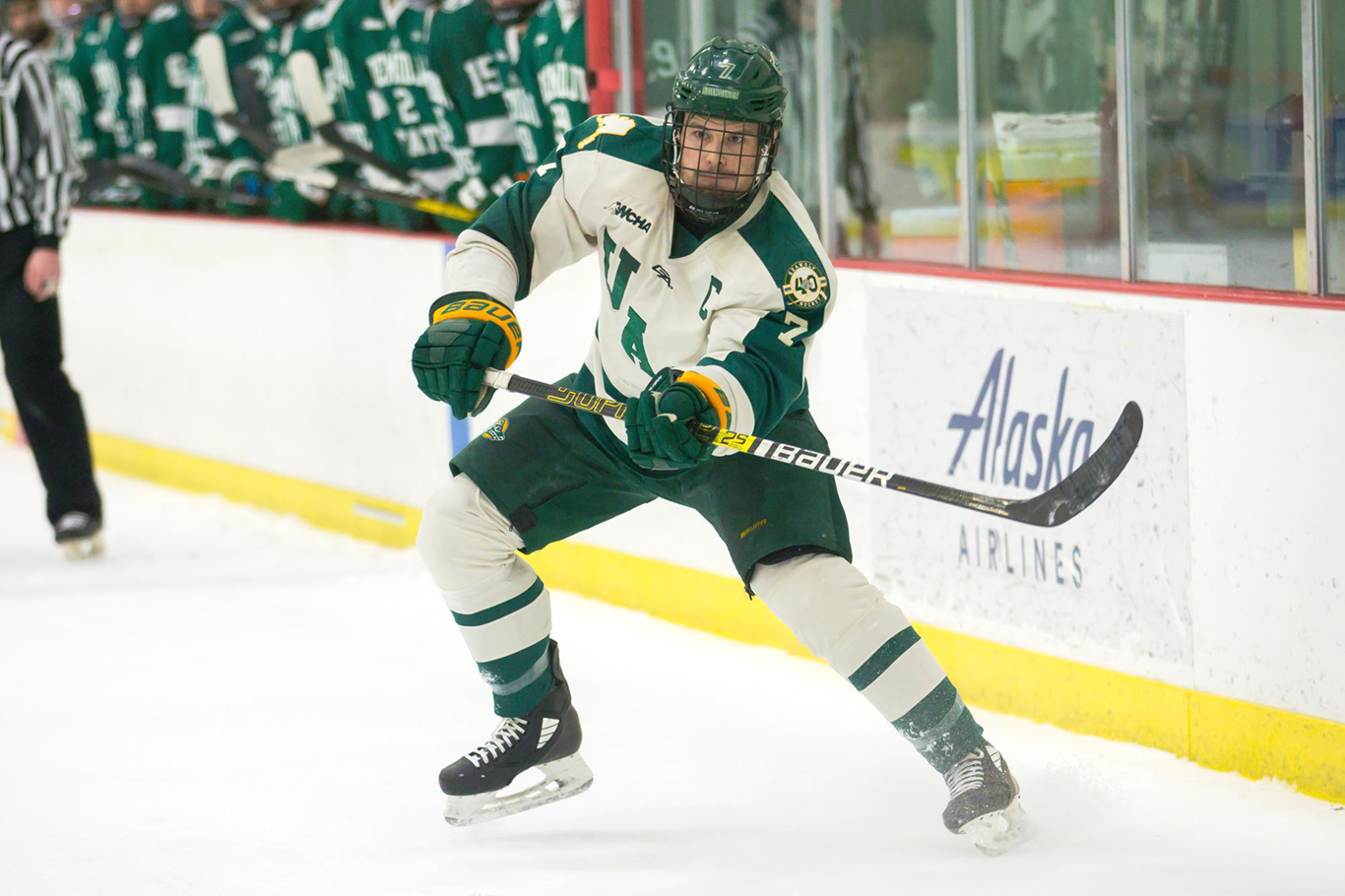 Nicholas was honored with the Senior CLASS award for the 2019-2020 NCAA hockey season in April 2020. Photo courtesy UAA Athletics.

Senior captain of the UAA hockey team, Nolan Nicholas, was described by head coach Matt Curley as "the best captain I've ever coached." Nicholas proved Curley right by winning the Senior Celebrating Loyalty and Achievement for Staying in School, or CLASS, award for the NCAA Men's Ice Hockey 2019-2020 season.

"Obviously it's a huge honor to receive this award. You don't really understand the magnitude of it until you read up on it," Nicholas said. "You see the guys that are included in the top 20 candidates who are great hockey players and great people, and to be singled out among a group like that is tough to put words to."

Curley said it's not just leading with words as a vocal leader that won Nicholas the award.

"Nolan [Nicholas] made my job a lot easier as a coach with a guy like him who can run the locker room like he did," Curley said. “[Nicholas] leads by example. He's pushing everyone around him to be better by his actions.”

Nicholas isn’t just a leader on the ice, he also excels in the classroom. He earned a 3.84 accumulative GPA as of the end of the fall 2019 semester, made the Western Collegiate Hockey Association's All-Academic team and captured scholar-athlete honors his sophomore, junior and senior year.

Curley recounted a story about Nicholas that he felt encapsulates his dedication to the team and the sport as a whole during the second semester.

Nicholas needed to take a class on Tuesdays to finish up his justice degree, but the class conflicted with the team’s practice schedule. Instead of getting a few extra minutes of sleep before heading to class, he got up early, headed to the rink and went on for 30 minutes before practice even started, then showered up to hustle to class.

After his two hour class, Nicholas hurried back to the rink where the practice was wrapping up. While in his already cold and sweaty equipment from earlier in the morning, the captain showed the rest of the team his dedication and joined the practice, which impressed Curley.

"Even though he had to take off early to fill an obligation academically, he was getting back on the ice… his spot in the lineup was in no way jeopardized, but that just shows the type of person and leader he is," Curley said.

Nicholas was an ironman for the Seawolves throughout his tenure in Anchorage, leading the squad with 131 games played throughout his UAA career, missing only seven games in four years, along with playing in all 36 games of the 2019-20 season.

With a season-high of two points in his freshman and senior campaigns, his game wasn't about the offensive side of the puck. The style that Nicholas played wasn't flashy as a stay-at-home defenseman.

"My job was to block shots, play with physicality, kill penalties and get paired against the top lines of the opposition," Nicholas said.

From Thunder Bay, Ontario, Nicholas grew up playing hockey for his father, Darrin Nicholas, when he was in Bantam and Midget league hockey.

Nicholas came to Anchorage while playing with the Sioux Falls Stampede of the United States Hockey League.

"I was already talking to UAA and the coaching staff a lot. One game we played against the Chicago Steel, my defensive partner and I killed a 5-on-3 penalty in overtime in a game we ended up winning. I had breakfast with a coach of UAA and he laid out an offer for me right there," Nicholas said.

The thought of moving to Alaska seemed strange at first, he said.

"I never would have thought I would live in Alaska ever, but it turned out to be a great experience for me," Nicholas said.

His favorite part about playing at UAA was the challenges of the program and adversity.

"A lot of college teams have to go through some stuff, but not a lot of them don't know if they're going to be playing hockey next year," Nicholas said. "We never looked at the polls or what people were saying about us, we just tried to make the most out of this year."

The friends he made on the team is what he will miss the most about being a Seawolf, Nicholas said.

"The best part of the game is hanging out with the boys,” he said.

Nicholas plans to join a team in the ECHL, the "AA" professional hockey team, and make a name for himself there, or use his justice degree right out of college and join the Thunder Bay Police Services in his hometown.

Whether it will be on the front lines of the street, or the blue line on the ice, Nicholas has proven himself to be a leader anywhere.